Now that you know what Martin Samuel and Alan Shearer think, you might not be interested in any more expert views on the recently-finished World Cup. But amid the small print on the “past World Cups” page of FIFA’s website is a link to a series of documents which provide a more fascinating insight into past tournaments than the title “Technical Study Group Report” suggests. These reports were first commissioned after the 1966 finals in England, when national team coaches from the 16 finalists were interviewed to gauge their views on competition preparation and tactics.  Ever since, the reports have provided fascinating insights into the thought processes of World Cup coaches and, increasingly down the years, insights into FIFA’s own priorities, good and bad (or bad and ugly, depending on your view). From a stand-alone 40-page document in 1966, the report trebled in size over the next two tournaments, not entirely due to the exponential improvement in the quality, scope and size of the photographs.

Since 1974, however (and the date has significance), the Group’s reports have been subsumed into FIFA’s general tournament reports. These have covered not only the matches but security, media, sponsorship, money and more money. And genuine tactical analyses, as opposed to general overviews of the team’s performances, have become, like so many of the teams’ defences down the years, more “compact.”  The clearest trend in these reports will be no surprise to keen studies of FIFA. The 1966 and 1970 reports were working to a pure footballing remit, how to improve the actual matches and quality of the finals competition. After 1974, and the election of one Dr Joao Havelange as FIFA president, political and financial interests quickly took priority. And seemingly obvious matters such as recommendations for the future were sidelined if they didn’t already fit in with FIFA “policy.”

The best example was the vexed issue, even in 1966, of the make-up of the qualifiers for the finals. After the competition in England, the coaches suggested “every step should be taken to ensure that the final 16 represent the best in the world.” The geographically-based qualification tournament meant, the report noted, “certain teams were regularly guaranteed a place in the final matches, whereas many clearly better teams were eliminated.” In 1966, this meant the likes of Mexico and North Korea were finalists at the expense of European and South American supposed betters. The debate still runs, if some reaction to New Zealand’s presence in South Africa is a guide. But in 1966, African teams boycotted the event (see the article “Boycott!” on this site, 31 May 2010) and North Korea and Australia played off to provide Asia and Oceania’s sole representative. And still this was too cosmopolitan for some.

The 1966 report recommended that “FIFA should set up a small study group of expert administrators to analyse the many possibilities before changes (to finals qualification) are recommended.” Given that this was a study group recommending a study group, it wasn’t surprising that little progress was made on the issue. And in 1974, Havelange was elected president on the back of votes from “lesser” nations and confederations (mostly Africa).  So by 1978 the African and Asian qualifiers, Tunisia and Iran, “surprised some major teams by the standard of their play” (“major teams” including Scotland, who drew with Iran – I have no comment to make at this time). And by 1990, we were assured that there were “no such things as developing countries in the World Cup finals competition any more.” The study groups throughout the 1970s firmly favoured a 16-team finals, with a qualifying series of 15 home and away ties to determine who would join the hosts in the final. However, the study groups generously came up with suggestions on structuring the expanded tournaments they’d opposed, such as second round groups and qualification for the four best third-placed teams in first round groups, the latter idea underpinning the Republic of Ireland’s “successes” in ’90 and ’94 – I have no comment to make etc….

The reports are especially fascinating in tracking trends in the playing of the game. The 1966 report expressed deep-seated fears about “more defensive dispositions of play” such as (ulp!) 4-3-3, which were leading to “the game being stultified as a spectacle.” 1970 was a blip in this downward spiral, with the report suggesting that the nostalgic, rose-tinted view of the event was an accurate one and the tournament’s qualities were down to the football every bit as much as Colour TV or Pele’s open goal misses. But as the years passed, cynical defensive tactics exercised the minds of the study groups again – including that of an unrecognisable Carlos Queiroz among the 1990 students. The “playmaker” was “a thing of the past” by 1998, having “seemed to have disappeared” in 1994, a mere two tournaments after Michel Platini was lauded for his “passes of diabolical precision” (which is either a mistranslation or from the Daily Mail). And the “defensive midfielder” had a paragraph all of his own by 2006.

Such observations put the technical report at odds with the general celebratory tone in surrounding paragraphs. It will be a surprise to some of you, I’m sure, that USA ’94 was “the greatest event in football history” and that France ’98 “was, if anything, an even greater event than all those that preceded it.” But by this stage, FIFA’s report concentrated as much on media and sponsorship as on ball skills. As with a lot of these things, though, it’s the passing details that fascinate. The “multi-ball system” which allows throw-ins to be taken without un-necessary delay, was an idea which the 1970 group had. And trivial though it may sound, that idea has done as much as any to increase the actual playing time in a nominal 90 minutes.

Full colour photos appeared in the 1974 report, which provided frightening reminders of what drugs did for Dutch hair-stylists and how very little Fabio Capello has changed in 36 years. There was also a mini photo series about West Germany’s Gerd Muller scoring “goals as only Muller can score them.”  This is amply demonstrated by the pictures of his winner in the final, three showing the start and end of his quick turn on the edge of the six-yard box, surrounding a fourth showing his powerful right-foot shot from the edge of the penalty box. I certainly haven’t seen anyone else score a goal like that. When England get a mention at all, which isn’t as often as most “big” nations, it’s usually quite favourable. The 1970 report suggests that “five matches were unforgettable” and England were in two of them – albeit they lost them both. And in 1998, their exit was purely bad luck.

Glenn Hoddle is praised to the hilt for “his courage in using all these young players” (i.e. Michael Owen). The team had a “steadfast libero” who, believe it or not, answered to the name “Tony Adams.” And there was a distinction made between Paul Ince and an “offensive midfielder” – not a distinction many others in football have made. Occasionally, though, England look more like England. The 1982 report was over-stocked with diagrams with arrows. And the thickest arrow was the one explaining England’s supply line to its forwards. “British” football is not meant as a compliment to Canada’s ultra-defensive 1986 outfit (although in keeping with the politics of the competition, their appearance “must undoubtedly be considered a gain”).

Northern Ireland’s “Anglo-Saxon style” wasn’t a description that would have sat comfortably with the Celts in the squad, but you sort of know what it meant – especially when the phrase appears above a picture of Norman Whiteside. The early reports place great emphasis on the success of squads based on only one or two clubs, which explains why Ron Greenwood – who sat on the first two groups – picked so many Liverpool players when he became England boss in 1977, giving Ian Callaghan a cap over a decade after his previous one. The 1966 report notes that “players were expected to cut down smoking,” and that the West Germans could have two bottles of beer a night – which might explain Hans Tilkowski’s display in the final (itself considered, as David James said recently, a mistake-ridden, if exciting, match with “some controversy over the fifth goal”).

There are a couple of stand-out “frighten the kids” photos. Two of Sepp Blatter with a full (-ish) head of hair. And one of FIFA congress delegates “celebrating” Havelange’s re-election as president, where the dominant image is a stern-faced Havelange grabbing 70-year-old vice-president Harry Cavan in a manner more suited to kidnap than celebration. And Brian Glanville tells it like it is in the 1978 report. FIFA marked the final as “a major triumph for a country that clearly loves its football” (and had “magically” got there in the first place). Glanville had it down as a “proper climax to the World Cup…played in a sour spirit, thoroughly badly refereed, indifferent in quality and gave Argentina a win by the skin of its teeth.” Glanville wasn’t asked to contribute to the 1982 report.

So what are we to expect from this year’s technical study? Danny Jordaan sounds a less trenchant critic of the football than Franz Beckenbauer was of 2006 (“the battle for the ball rather than artistry on it dominated proceedings”). This is possibly just as well, especially after the martial arts movie which masqueraded as Dutch defending in the first half of the final. But will technology, rather than technique, be the dominant theme, as it should be? One suspects that goal-line technology will only leap up the agenda if someone can demonstrate how certain individuals can make – or get their relatives to make – a mint out of it.

The continuing failings of Asian and African sides will be less than emphasised. Instead, there’ll be paragraphs on Japan’s neat passing game, how far Cote D’Ivoire might have gone if they’d been drawn in an easier group, and Ghana’s damned, DAMNED bad luck – with a mention in despatches for that rotter Luis Suarez – unless or until Uruguay’s vote matters. If the “lesser” nations argument rears up again, great play will be made of New Zealand being the only unbeaten team in this year’s tournament (the 2006 report reminds us, entirely necessarily, that England departed that tournament unbeaten, which is one for the “you could say that, but you don’t” column). But, alas, we won’t read what on earth happened in England’s camp to make such a talented group of players play like… that. Such tactical analyses long since made way for details of how “the on-going social and emotional pluralisation opens up platforms for additional innovative marketing activities during the FIFA World Cup.™” (trans: there were more women at games so we can sell more stuff to them). A far cry from the fascinating insights of the first technical study group, 44 years ago, in a different world.

Pompey: The New Boss Could Be the Old Boss. 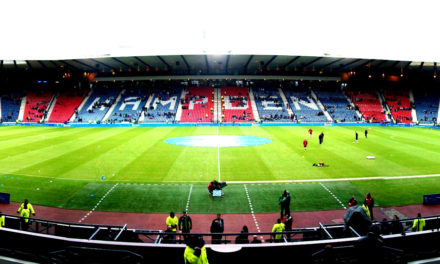