Many years ago, I listened to prize-winning author and ultra-famous Arsenal fan Nick Hornby reading extracts from the book which made his name, Fever Pitch. And the reading was a disappointment. Hornby was good, but just not as funny as the voice, indeterminate and certainly not my own, in which I’d read the original. The same disappointment arose when listening to speeches by Guardian journalist David Conn. Conn is a decent speaker – even when “10-minute” speeches to Supporters Direct conferences exceed half-an-hour, but his words spoke louder from the page in the voice inside my head. This I know to be unfair, after watching the long-heralded documentary Who Owns Leeds United, which aired on October 10th in the BBC’s Yorkshire and Lincolnshire area. For the core material of the programme overpowered concerns about presentation, and the presentation itself was of a standard to which all football documentaries should aspire.

The twenty-nine minutes on Leeds’ recent ownership history focused its attention, for reasons lawyers may be best-placed to describe, on the club’s current owner, Kenneth William Bates. Conn told the story of their ownership, since the departure of former chairman Mr Peter Ridsdale esq, with a refreshing clarity. And while the story contained nothing new to close observers of Leeds since 2004 – which would include many readers of this site – it would have provided valuable insight to those new to it. Conn took us methodically and simply, though never simplistically, through Leeds’ tale of financial woe, beginning with Ridsdale “living the dream” at the start of the century. “It is generally accepted that the Peter Ridsdale was financially disastrous for the club,” Conn noted. This isn’t, of course, accepted by Ridsdale himself in his current energetic efforts to re-write this part of Leeds United’s history. But this was a documentary didn’t get side-tracked on such side-issues – unlike me.

The tribulations of the “Yorkshire Consortium” of local businessman who in 2004 tried, and failed, to repair the financial damage done by Ridsdale, were faithfully recalled by then-chairman Gerald Krasner. Eyebrows may have been raised when insolvency practitioner Krasner stated that the consortium “were not rich men,” having claimed his Leeds chairmanship to be a “labour of love” for which he would normally have charged “a lot of money,” – many BBC Iplayer viewers in the Plymouth area would know roughly how much per hour he may have meant by that. But the documentary was honest enough about the consortium’s failings, even in its rush to get to the star of its show, Bates, the “unlikely guardian angel from the tax haven of Monaco.”

The documentary was at its most revealing and disturbing at this point, with two stark, black-and-white photos of a younger Bates. The second was demonstrably Bates, though with dark hair. The first showed a clean-shaven, portly yet kindly-looking face, peering innocently out of a car window; proof that the camera may not perpetually tell the truth. Bates’ “colourful” business history was given a brief, wilfully disrespectful airing – “wheeling and dealing… he dabbled in ready-mixed concrete”, as dodgy-sounding a business CV as you could write, bang-updated by the addition of 21st-century business bêtes-noires, “property and banking.” Author Tom Bower, who devoted thirty-three pages of his book Broken Dreams – Vanity, Greed And The Souring Of British Football to Bates, gave us his précis of Bates’ 23 years at Chelsea, buying the club from bankruptcy and selling it just before it became bankrupt again. “Not a great achievement,” he noted.

In a warning to fans currently protesting against Bates for developing Leeds’ Elland Road ground rather than the team, Bower said Bates, while Chelsea chairman, “redeveloped the ground and earned a lot of money for himself from it.” And he added that he didn’t think “selling (Chelsea) to a Russian oligarch was a great service to the fans,” which is not a view held by everyone with Chelsea allegiances – not yet, anyway. But the idea of Bates as self-serving twister was established. And Conn warmed to that theme immediately. Newspapers heralding the “Bates Era” at Leeds in January 2005 “suggested Bates had personally taken over Leeds. But Bates denied being anything more than the “UK representative” of an indeterminate entity called ‘Forward Sports Fund’ (FSF), which had actually ‘bought’ Leeds.

With heavy emphasis on the words “overseas” and “tax haven,” Conn showed how difficult it was to demonstrate whether Bates was lying… or even telling the truth, for that matter. Economist John Christensen cited a purely hypothetical example of “someone who’s resident off-shore, say in Monaco.” Tax havens weren’t just havens from tax: “Professionally we call them ‘secrecy jurisdictions,’” he told us, adding emotively that “money-laundering and bad activities” could be going on “because we can’t find out who actually owns the club.” The secrecy of Leeds’ ownership, it was implied, also cost the club a £25m loan from Leeds City Council, and seconds of airtime later Conn added that “just two-and-a-half years after Ken Bates took over Leeds, the club was effectively bust.” At which point the documentary played the “small business” card.

Conn interviewed Stuart Russell, whose ‘small’ firm Russell’s Patisserie, was owed £2,700 by Leeds. Not “a lot of money in the big scheme of things,” Russell himself noted, “but you have to make a lot of rolls to make £2,500.”  So, a third of the way into the documentary, Bates was already established as a secretive failure who took Leeds into administration. This was the cue for a topical dig at the ‘Football Creditor’s Rule’ which ensures that usually highly-paid players get all their money out of an administration process, while Stuart Russell “got back a cheque for just under £50.”

“Incidentally”, said Krasner, pretending the thought had just come to him, “a football manager is not a football creditor.” So Bates’ first Leeds manager, Kevin Blackwell, was left to scrabble for a small fraction of the, ulp, £993,332 he was owed. But two organisations stood to lose much more, “obscure off-shore companies called Astor Investment Holdings and Krato,” which had apparently loaned Bates’s Leeds £15m. Astor and Krato were quickly linked to “tax havens” and “closely-guarded” secrecy, just before Krasner explained that they insisted “that the person who has lost them that money be allowed to buy back the club,” as they told administrators, KPMG, that they would waive their bumper debts if, and only if, Bates remained “in charge” at Leeds, on behalf of… well, no-one, exactly, seemed to know. “Just to repeat,” added Conn, directly addressing the many viewers who had just shouted “Eh?” at their screens, “the investors who lost a staggering £18m under Ken Bates still insisted that he remain in charge.”

The viewer was then taken on a European tour of companies and court cases to determine why Astor and Krato were so keen to get Bates back in charge. But even high court judges couldn’t find out ‘who’ let alone ‘why.’ Bates, of course, was “the most obvious person… to clear up the mystery.” The documentary had already shown him saying that “the one condition they made of coming in was that they did not want any publicity or their identities being disclosed.” But this was immediately followed by an “incredulous” Krasner saying Bates “didn’t even know who he was working for,” inviting the viewer to ask how, then, did Bates know what they were thinking?

As the documentary-makers strongly suspected, Bates wasn’t about to answer their questions, claiming in an e-mail worthy of a school exercise book belonging to “Ken Bates, Class 2D, aged seven,” that he found the BBC (the “Bloated, Biased Corporation”) “thoroughly untrustworthy.” Further examples of Bates’ literary skills were cited; his reference to Leeds fans as “morons” (comfortably refuted by fan representatives’ concise, well-informed contributions to the programme) and his likening, in the official club programme column, of Leeds United to sex, in a passage which would have had any children reading the programme asking “what does that mean, Daddy?” Daddy, of course, wouldn’t have known, as what Bates wrote was, in fact, nonsense. But, as Lee Hicken of the Leeds United Supporters Trust pointed out: “there’s usually something in there that will offend someone.”

Conn then turned to the football authorities’ regulations “designed to make sure that the people who own clubs are upstanding,” having just established that Bates was pretty far from “upstanding.” We were the taken on another tour of ignorance, as it was revealed that the Football League and the Football Association had declared Leeds’ owners to be “fit and proper” without ever knowing who they were. Nobody from the League, “including its chairman Greg Clarke, was prepared to talk to us on camera,” Conn added, implying that not even Clarke could defend their (in)action in public debate. The League instead provided a statement which said little more than that Leeds’ owners were fit and proper because the club said so, to which the most reasonable retort can only be, “Right, so who are they, then?”. And they couldn’t say what the club said because it was confidential.

They, and Bates, would like to file such matters under ‘history’ now that Bates has bought the majority, controlling shareholding in Leeds – via “an obscure company based in (a) tax haven”, Conn added, probably unnecessarily by this stage. But even this apparent clarification raised more questions, as “just at the point when the riches of the Premier League were out of the club’s grasp,” – i.e. just as the club’s market value plummeted – it was put up for sale by FSF. This was yet more anti-logic for newcomers to the story to ponder, before being told Bates was the buyer, having been about the only person who seemed to know the club was for sale.

Viewers were left to draw many of their own conclusions, not least on how Bates could redevelop Elland Road without apparent reference to its owners – a “company based in (a) tax haven,” as Conn noted “while we’re at it.” But the documentary transcript was much longer than other recent football documentaries of comparable length. It never felt too rushed to understand. And the right interviewees made the right points at the right times. And whilst the title’s eponymous question was never going to be answered – unless an anonymous source dropped the answers through David Conn’s letterbox in a brown envelope – it never felt like the piece of failed investigative journalism it technically was.

Of course, seasoned observers already suspect who has beneficially controlled Leeds United since 2005, whether they have (exacted) that control directly or through, shall we say, ‘related’ individuals. But the point now is to force the football authorities to guard against a repeat – in that sense, the documentary was well-timed, coming hours before the government’s response to the parliamentary select committee’s report on ‘football governance.’ It is small wonder, on the basis of stories such as this, that even a government naturally inclined towards a laissez-faire attitude towards governance in so many areas of life is taking such a hard line on football at the moment. 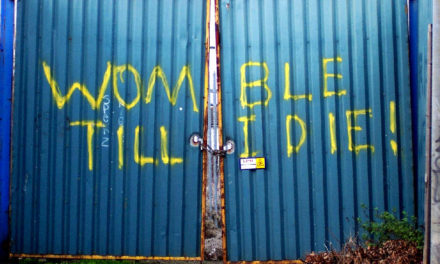