As Jamie Vardy swept the ball past David de Gea to give Leicester City the lead in their Premier League match against Manchester United yesterday and record his eleventh successive league goal of the season into the bargain, something rather odd and perhaps somewhat telling happened in the television commentary box. As Vardy wheeled away in celebration of the goal, the Sky Sports commentator Martin Tyler exclaimed, “That’s what they came for!” With a win being enough to put either side top of the table going into December, we might have anticipated that this tussle – so familiar to the supporters of Manchester United, yet so alien to the cast majority present, those of Leicester City – would in itself be enough to tempt just over thirty-two thousand people out into the cold of a November evening. Or is football, as a medium, now moving towards being considered little more than just another a vessel to push the notion of conventional celebrity?

The exaggerated, distorted effect of the camera lens on the football match is well-established, but sometimes this extends its reach to areas might not have otherwise considered. As Vardy’s goals have piled up, the background noise concerning the player breaking a record for having scored the most consecutive goals “in Premier League history,” and in Martin Tyler’s post-match comment it reached its crescendo. With the record now broken, a further one now lays in wait and this comes with the next match. If Jamie Vardy can score in Leicester City’s next match, against Swansea City next week, he will equal the record set from the start of the 1931/32 season by Jimmy Dunne for Sheffield United. If he can score in his next two matches, he will break that record, and that would be something incredible.

It should be completely obvious that a record for the most consecutive goals “in the history of the Premier League” is a fairly arbitrary record which, more than anything else, betrays a lack of understanding of the definition of the word “history” itself. When the Premier League was founded in 1992, it marked an enormous change in the management and administration of the English football. Almost certainly the biggest since the creation of the Football League in 1888. That it was such a big change was, however, in terms of the management and administration of the game, not in relation to anything that took place once the referee blew his whistle at three o’clock on a Saturday afternoon. To have scored the “most consecutive goals from the start of the season in Premier League history” could well end with “since the introduction of colour television in the UK” or “since the introduction of squad numbers.”

Well, we might well consider that there may be incentive to give the impression that professional football was invented in August 1992, but even if we’re generous and buy into the idea that this date is indeed of any real significance whatsoever, our attention turns to Tyler’s statement yesterday afternoon. At first, it seems obvious to dismiss what Martin Tyler as “over-exuberance” in the part of the broadcasters. But it seems reasonable to assume that an individual who has been commentating on the game for three and a half decades would have his over-exuberance glands full check. Considering the constantly changing nature of football in the twenty-first century, might it just be possible that a growing number of people these days were watching for the record break attempt rather than for the result of the match itself?

This idea is one that has been expressed on occasion over the course of the last few seasons or so. There has certainly been anecdotal evidence of a sub-set of supporters who follow the fortunes of players rather than clubs, even if the notion of them hasn’t quite entered the mainstream, just yet. We might, however, have assumed that these people ranked amongst those watch on the television from afar, that they were relatively tiny and insignificant in number. The utterance of Martin Tyler may or may not have been deliberately scheduled, but the fact of the matter is that at that moment, that’s what was said. And that, completely in and of itself, surely carries some significance.

That broadcasters might be interested in tilting the lens through which we the see the game probably shouldn’t be surprising. There are twenty-two players in the field during a match could mean twenty-two opportunities for marketing, for attempting to tap into a market for people who don’t get that feeling from watching a team sport. It gives the broadcaster an opportunity to squeeze another egg – even if that egg is a tiny one – from its most lucrative golden goose. Indeed, it could even be consider that football clubs and the game’s regulators are ultimately beneficiaries of the current system to the pull extent that they can be, clubs can benefit from it as well. If everybody’s focused on the players, then structural inequalities between clubs and divisions will fall down the agenda. Indeed, they might even rationalise that a proportion of the game’s problems with supporters have come about on account of the club allegiance of supporters.

That this seems to be A Thing now is, perhaps, a reflection of the increasingly atomised society in which we live. Who needs a sense collective belonging, or the agony of defeat when your chosen man has given his all? This requires a degree of shifting one’s perception of the game, but it feels blinkered to be blithely dismissive of the possibility that it could be real. The notion of what it means to take an interest of the game could be shifting slightly, even though it remains near impossible to imagine a time when club allegiance will be a thing of the past – and certainly not entirely – when we consider how much the game has changed in so many other respects over the last couple of decades, well… why should supporters be exempt from this?

It may well that this demographic will continue to evolve over time, but the specifics of the events at The King Power Stadium should, at least for no, be able to stand on their own two feet. It may well that Ruud van Nistelrooy is a sexier name for the media to throw about than that of Jimmy Dunne, and it should go without saying that none of this is to belittle the achievement that Jamie Vardy has already accomplished, especially has not done this at Leicester City are playing in such a stratified division. And as someone born in Sheffield and raised as a supporter of Sheffield Wednesday, breaking the eight-four year old record of a Sheffield United player may well give a little incentive that might otherwise be missing, considering the importance placed on breaking that “Premier League record.” Ultimately, though, Leicester City will go into December 2015 in second place in the Premier League table, and level on goal difference with the leaders, Manchester City. And it is this sort of record that, for now at least, means way, way more than any individual goalscoring record ever could.

Light At The End Of The Tunnel For Kettering? 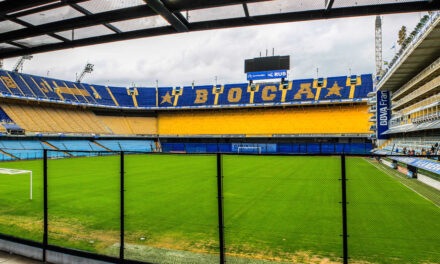