What Not To Wear 2012/13: Dotmund Reviews The Premier League Kits For The New Season

Oh, is it that time of the year already? The football clubs of the Premier League are making their preparations for the start of the new football season and this means, of course, the release of their new kits. So, in the first of a two-parter – what he thinks the kits of all Premier League football clubs should  look like will follow – here’s Ted Carter with his review (and a league table!) of the kits of the coming season.

It’s almost the new football season, which means that hundreds of thousands of old plastic bottles have laid down their lives so that we all might easily tell who is on which team. Yes, it’s time for my kit review again. But this year, I have gone the extra mile and provided helpful diagrams for all of the representatives of the clubs and kit manufacturers, in order to prove that kit design really isn’t all that hard. Up for consideration are every home and change strip for the twenty Premier League teams, because as we all know third kits are a cynical marketing exercise. I have rated each kit out of five for an overall score out of ten (maths!), in order to make an early season league table. I’m not saying that this will be a reflection of the final league table for 2012/13, – that is for other people to say.

It is probably also worth pointing out at this stage that I am colour blind.

ARSENAL: What’s right about it? The home strip has much to admire. It’s clean and simple and neat, all very admirable traits. Also, the return of blue trim has echoes of the days when Michael Thomas ruled the world. What’s wrong with it? The away kit is a nightmare. Purple is a gormless change colour for a team who wear red to pick, for starters. But Nike’s insistence that hooped shirts have always been screaming out to have thinner hoops on the sleeves is dazzlingly misguided. Overall score: 6

ASTON VILLA: What’s right about it? I like the home strip. The shadow chequered pattern of recent years has been discarded and last season’s experimental foray into the hotbed world of black socks has been wisely abandoned. What’s wrong with it? I have serious reservations about lime green and navy blue being a thing. Is it now a thing? Do we really want to live in a world where that is a thing? Also, I don’t like the hoops on the socks – and I’m someone who normally loves a hooped sock – and the cut-out bits on the shorts are daft. Overall score: 4

CHELSEA: What’s right about it? Everything. It’s beautiful. It should be in a museum. There are lifelong Arsenal fans who will get married wearing this kit. In recent seasons, Chelsea’s kits have been an object lesson that in this brave new world, it is possible to make a hash of a plain blue football kit. No such problems this time. The gold trim on the home kit is very becoming, whilst the away kit is so magnificent I could actually weep. What’s wrong with it? My only complaint? If the home shirt was completely without embellishment it would be perfect. Overall score: 9

EVERTON: What’s right about it? A lot. Everton have got a lovely, restrained, pair of kits this year. What’s wrong with it? In an ideal world, I’d prefer the home strip to have white socks rather than blue. And, being a fusty old traditionalist, I’m still unsold on the idea of all-black strips. But they are very much in vogue and this one is a good example of how to do it right. Overall score: 8

FULHAM: What’s right about it? The home kit is OK. Pinstripes are always a welcome addition. What’s wrong with it? There is much to discuss. Aside from the fact I don’t like the colour or design of the away strip – particularly the white turnovers on the socks (it would be better if they were black) – I really don’t like Kappa’s insistence on plastering their logos all over the place. Yes, they could argue that Adidas do it too. But their corporate logo is three stripes. Kappa’s is two busty wenches. Overall score: 4

LIVERPOOL: What’s right about it? The home strip is positively dreamy. Plain, simple and pure. Plus a welcome return of yellow trim. What’s wrong with it? The away kit. It is black, for starters, but it’s also festooned with all kinds of inexplicable design features in grey. Would an all yellow kit be too much to ask for? Or how about all white? Liverpool, why you do me this way? Overall score: 6

MANCHESTER CITY: What’s right about it? A lot. Manchester City have a strong recent tradition of quality kits and this one is no exception. There are many things which are actually an improvement on last season’s offering, not least that sky blue shorts have been abandoned. I also rather like the away shirt, with shadow pinstripes. They make me come over all funny. What’s wrong with it? I’m not sold on the black trim on the home shirt. Purple, yes. White, yes. Gold, even. But black is rather un-Citylike. And the cluster of narrow hoops on the away stockings just looks like Rumplestiltskin’s revenge. Overall score: 8

NEWCASTLE UNITED: What’s right about it? A lot. Welcome back, proper stripes on a Newcastle jersey. We have missed you. Oh how we have missed you. The away kit is also rather spiffy, especially considering that last season’s effort was all black. What’s wrong with it? I’d prefer blue to red for a Newcastle away kit. Overall score: 8

NORWICH CITY: What’s right about it? Not a lot. Norwich City had the best kit of all last season, though, so there’s some residual good feeling from that. What’s wrong with it? It’s too busy. Last season’s kit was very simple and therein lay its complete brilliance. It’s almost as if this year someone complained it needed more bells and whistles. So, there’s creeping trim pieces. Sneaky, Norwich. The away kit is black (damn you all) and it’s splattered with yellow and green trim and embellishments. Rubbish. Overall score: 4

QUEENS PARK RANGERS: What’s right about it? Nothing. Well, I suppose it exists, and will therefore serve to protect our precious eyes from seeing Joseph Barton’s genitalia. What’s wrong with it? It’s a disaster. A disaster. I’m too sick to even discuss it. Just look at it. Overall score: 0

READING: What’s right about it? Bits and bobs. The home kit is fairly straightforward and the away kit has a shadow pinstripe hoop, which I think is delicious. What’s wrong with it? Bits and bobs. I don’t like the Puma bar embellishment on the home or away shirt, especially in the former as it seems to be included at the expense of third hoop. The away kit is just a bit too busy to be really lovely. Both kits are a fine example of how little things can just make me clench my anus. Overall score: 6

SOUTHAMPTON: What’s right about it? A whole lot. It is a beautiful kit, bar for the narrow sock hoops. Plain and simple, with pinstripes, too. Lovely. I’ll go as far as to say that it’s the best kit Walsall never had. What’s wrong with it? It’s not a Southampton kit. Something of an oversight, that. Overall score: 1

STOKE CITY: What’s right about it? Almost everything. The latest Adidas TEAM WHO PLAY IN STRIPY SHIRTS template kit is very nice (although probably a bit over the top with piping on the shorts) and so Stoke City’s kit is very nice. Some people have queried the decision for Stoke to adopt a Barcelona-style blue and red away kit. However, Stoke City are the 4th oldest professional football club in the world, so if anything, Barcelona are wearing Stoke kits. What’s wrong with it? I’d have preferred yellow for the away kit. But I am very hard to please. Overall score: 8

SUNDERLAND: What’s right about it? Riding the shirt tails of the Adidas striped shirt template revolution, there’s little to complain about in Sunderland’s home strip, although I preferred last season’s black v-neck as opposed to this year’s red one. What’s wrong with it? I don’t like the away kit. Again. Overall score: 5

SWANSEA CITY: What’s right about it? Everything. I love the cleanliness and simplicity of the home strip and the gold trim. You have to earn gold trim, and last season Swansea did. The away kit, in Welsh national colours, is lovely. What’s wrong with it?

I feel it is terribly wrong to have the same colour shorts in your change colours, which is the case here. However, it really wouldn’t have worked otherwise and is a piece of art, so I am willing to forgive it. Almost. Overall score: 8

TOTTENHAM HOTSPUR What’s right about it? It’s not a bad kit, this one. Fairly plain, neat and straightforward. Fairly close to the right colour. Fair. What’s wrong with it? Well. There’s too much fiddly trim on both kits, for starters. It just doesn’t need it. But my big beef is that the home kit and away kit should swap shorts. Although this is fairly easy to achieve by bunging the kit man a few quid, I reckon. Overall score: 5

WEST BROMWICH ALBION: What’s right about it? A lot. The home kit benefits from the Adidas striped shirt template effect, and the away kit has nice echoes of the first ever WBA kits. Another thing I like is that elements of each are transferrable with each other, to create alternate kits that don’t look stupid. Third kits be damned. What’s wrong with it? Would a return for yellow and green be out of the question? Overall score: 8

WEST HAM UNITED: What’s right about it? Plenty. It’s an admirably straightforward kit. What’s wrong with it? The socks are, in keeping with an overall theme of this season’s kits, far too busy. There’s no need for the huge Macron logos on the shoulders. And, for preference, I’d prefer a lighter blue for the change colours. Overall score: 7

WIGAN ATHLETIC: What’s right about it? A return for stripes! I’m a big fan of striped shirts. They are the sign of a superior club. Forget the fact that no team whose predominant kit is a striped shirt have won the English league championship title since Sunderland in 1935/36. It’s the way to go. What’s wrong with it? I’m largely unsold on the black trim on the home kit. But my biggest problem is with the away kit. It’s black, which as you may already have realised I hate, but it also has yellow trim (which is ugly) and white dots woven into the shirt (which is daft). Ugly or daft. Which is worse? This year’s Wigan away strip could well finally help us decide. 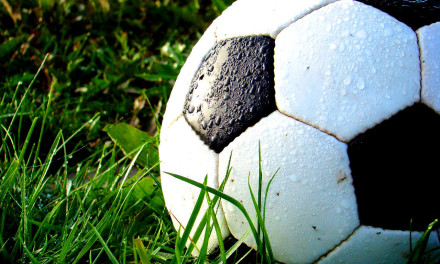 The League of Ireland – Bohemian: Bohs Will Be Bohs 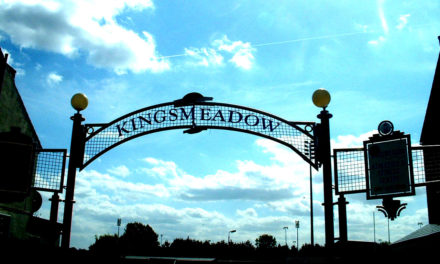 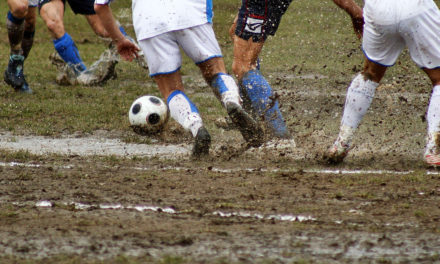 How We Used To Live, Part One: Bad Pitches