In a sense it’s understandable why, the first time it happens, it should be jarring. I tend to feel it when I hear commentators previously on the radio turning up on Match of the Day. It happened for me with Alan Green and also, going back further, Peter Drury and Jon Champion, both of whom made the switch from BBC Radio. If it’s an unexpected voice, it’s an unexpected voice. The issue comes with what happens next. It’s pretty easy to retune your ears to get used to a new voice, and if you continue to hold out because “it’s not normal” (there will be plenty who will just dislike that commentator’s style, and that’s fair – there are no universally popular commentators, but we’re not talking about those people here), well, that’s kind of on you. It’s now been 14 years since Jacqui Oatley stepped into the Match of the Day commentary box, and she isn’t going anywhere from our sceeens soon. Indeed, her career is still on the up.

Many of the previous pieces in this series have pivoted on who knows who, a network of people who knew each other through the army, or from jobs on newspapers. It wasn’t quite an old boys network, but it was pretty much calcified, and there was little room for the woman’s voice in these particular circles. Jacqui Oatley didn’t need them, though.

Her career has been one lengthy curve of success. Returning to university after quitting a job in intellectual property, she worked for a sports agency for nothing while completing her Postgraduate Diploma, all of which gave her valuable experience of sports journalism. She started at BBC Radio Leeds as a sports reporter while still studying, continuing there after graduation. Her first commentary of any sort came as a last-minute replacement for a match between Wakefield & Emley and Worksop Town in the Northern Premier League.

After a spell closer to her family home with BBC West Midlands, she moved on to BBC Radio London as a sports reporter, and then on to Radio 5 Live in 2003. Two years later, in covering the UEFA Women’s Championships for 5 Live, she became the first woman to commentate on a football match on British network radio. Also during this tournament, she interviewed the President of UEFA, Lennart Johannson, who made the somewhat infamous comment: “Companies could make use of a sweaty, lovely looking girl playing on the ground, with the rainy weather. It would sell.” The story flashed around the world. Johannsson retired from his position two years later.

In the same year, she made her Match of the Day debut. Her first match was the Premier League match between Fulham and Blackburn Rovers on the 21st April 2007, and in the week before the tabloid and right-wing press lathered themselves up into a frenzy. One tabloid newspaper greeted the news with the headline “From Motty to Totty.” You can judge for yourselves, but I blame cognitive the aforementioned dissonance for the contrarians – either that or rampant and thinly-veiled, deeply ingrained misogyny. Writing in When Saturday Comes in their June 2007 edition, long-time TV critic Cameron Carter skewered the matter perfectly:

The general theme of the complaints was that men had to listen to women banging on about whatever women talk about all day, without being exposed to their unyielding falsetto over quality time Match of the Day. One brittle respondent reported that he found Oatley’s voice “tiring”. “The male ear,” ventured a fellow sufferer-in-silence, “is not tuned to comfortable reception of the treble clef.” It seems this country contains thousands of middle-aged men who hide, barely, a nervous physiological reaction to the sound of the female voice. The fact is, Jaqui Oatley has a long way to go to achieve the irritation levels of the experts in her field and simply having a voice of the type used by Shakespearean actresses when unconvincingly disguised as men will not be enough to make a name for herself.

The huge amount of publicity brought the worst out in too many people. The hysteria that surrounded her arrival on Match of the Day died down, but being a woman on the internet with any public profile comes at a predictably depressing cost. Low key abuse from men is a fairly regular component of her social media replies, while in 2016 she had to report a Twitter harrasser who started sending her explicit messages. Police tracked down the social media user to a house where a sixth-form school student apologised to her, though he claimed that his Twitter account had been hacked. They always are, aren’t they?

None of this, however, has slowed her career. She became a familiar face on the BBC over the next four years, but turned freelance 2011 and has spread her wings well beyond the BBC since then (though she’s remained the face of their women’s football coverage and hosted Match of the Day for the first time in 2015). Elsewhere, she’s hosted both football and darts for ITV, The WSL Show for BT Sport, and last year she was confirmed as the successor to Patrick Barclay on Sky Sport’s Sunday Supplement. She also hosts a podcast on the team that she supports, Wolverhampton Wanderers.

It hasn’t only been football, either. Oatley has covered the World Snooker Championship, British Moto GP, Open Championship golf, and various other sports, including tennis and rugby league. And she ain’t got time for your shit, either. As she told the Guardian in an October 2016 interview, “When they tell me to get back in the kitchen, I tell them to get back to 1936.” She can anchor, she can commentate, and she can report. Jacqui Oatley is nothing if not an all-rounder. She was even awarded an MBE in 2016, if that’s your sort of thing.

Not all criticism of her commentary style, however, has been spittle-inflected and rooted in misogyny. The aforementioned Cameron Carter, writing again in When Saturday Comes, this time in December 2007, had this more constructive criticism to offer:

Jacqui Oatley has returned to commentary duties after a significant absence and I’m afraid she didn’t slip back unnoticed. Many male commentators have begun as awkwardly as she has, using stilted, second-hand phraseology and trying to sound all excited, but Oatley has the added drawback that her voice apparently goes into Morse code during goalmouth action. It’s difficult to believe that Dave Bassett could employ faulty logic in the arena of sexual politics, but there is clearly no reason football cannot have a female commentator (I would love to hear Moira Stewart, for example, describing a booking for simulation). However, this particular female commentator needs to find her own voice and, if necessary, a couple of Valium before the game.

What is all the more remarkable is that this journey started just 22 years ago, when she was already 25 years old. A serious football injury, sustained whilst playing for the amateur side Chiswick Ladies, ended with months in plaster, several operations and, having already been told that she wouldn’t be able to play football again, a deep desire to stay in touch with the game. That nudge resulted in the CV listed above, which is by no means exhaustive. It’s one of the most impressive resumés in British sports broadcasting.

As an advocate for more women to be working in sport, could Jacqui Oatley have given a better example of what can be achieved within the horrifically competitive world of sports media and broadcasting? Her very existence at the top of this game, so able in so many different disciplines and so knowledgable on more than one sport, is proof of the ability of the right woman in the right job and of the futility & stupidity of sex or gender-based discrimination. And with her career likely to close its mid-point now, those who are still suffering that cognitive dissonance will just have to put up with it for some considerable time to come. A trailblazer, who has pushed doors open for other women in broadcasting at every turn.

The Seven Ages Of Fan, Part Six: The Pantaloon

Peter Ridsdale & The Question Of What Constitutes A “Chairman” Or “Director” 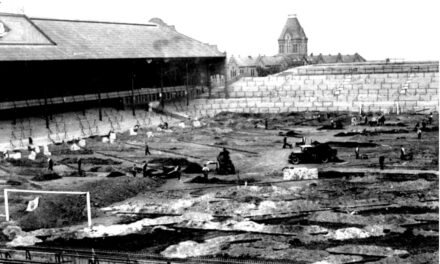