Stewart believed the interview was a shameless attempt to deflect attention from, gawd, “Lamborghini-gate,” the media’s reporting of an incident involving Morelos’s “Italian supercar” as “brake-tampering,” when the ‘truth’ was a private investigator, hired by Mrs Morelos, was attempting to attach a tracking device to said car. But even as he was on-air on BBC Radio Scotland’s ‘Sportsound,’ Stewart’s cynicism was being overtaken like a Lamborghini by events.

The interview was sub-titled inaccurately, making Morelos appear accusative of racist Celtic fans. Celtic complained. Sky deleted and, an hour before a full Scottish Premiership programme kicked-off on Wednesday night, apologised for the interview alongside a ‘corrected’ transcript. And that was that…until Celtic bombshelled a fiercely accusative non-acceptance of Sky’s apology, containing the complaint they lodged with broadcasting regulator, Ofcom. Meanwhile, the BBC suspended Stewart, two days after cravenly apologising for the Sportsound discussion he instigated.

This new phase of Scottish football media fiction began during Morelos’s softball interview, when he walked Sky’s Craig Slater through his stoppage-time sending-off in Rangers’ 2-1 win at Celtic on 29th December, after a second booking, for dismally obvious simulation. The subtitles began “in the match against Celtic.” They, accurately, described his simulation (“I fell over”) and added: “Afterwards, it was very frustrating to hear the crowd screaming at me. They were saying offensive and racist words.”

These subtitles matched Rangers’ immediate post-match claims that Morelos was racially abused at Celtic. These claims instigated a police investigation, which has uncovered no evidence. Although, as Stewart said on Sportsound, “the lack of evidence is not in itself evidence of it not happening” (his ‘live’ version of “absence of evidence isn’t evidence of absence”).

However, the subtitles did not match Morelos’s actual…y’know…words. Questioned on the subject, Morelos defended gestures he made to home fans at Celtic AND at Motherwell two weeks before. In Sky’s ‘correct’ transcript, Morelos said Celtic fans “started insulting me and shouting at me” and “that gesture only meant that the game was over,” matching Rangers’ pitiful ‘explanation’ of his cut-throat gesture to Celtic fans during his post-dismissal walk-of-no-shame-whatsoever.

Only then did Slater ask about “racist abuse from a crowd.” Morelos’s reply only mentioned one club, which was not Celtic. And, as some noted with almost indecent haste, when Morelos said “people often throw things at me when I score at away games,” he couldn’t have meant Celtic fans, because he has very famously yet to score against Celtic.

Here it is important to note that precise inter-language translations can be complex. For instance, Morelos’s admission that he “fell over” at Celtic was quoted as “fell down” in the Daily Record ‘newspaper.’ And, more importantly here, the Record also quoted Morelos as saying “the gesture I made wasn’t racist” (although there has been no obvious suggestion that it was). This sentence was missing entirely from Sky’s transcript.

But there’s honestly-mistaken mistranslation and there’s wilful misrepresentation. And Sky’s subtitle inaccuracies revealed that the interview was, as Stewart surmised on Sportsound, “set up” to get “everybody distracted talking about something else” other than the media misrepresentations of a story involving, and potentially hugely embarrassing, Morelos (and even Americans would spot the irony in a narrative punted to distract from misrepresentations being itself misrepresentative).

As the Alicante Celtic supporters club, early spotters of the subtitle skulduggery, noted: “Conveniently, Sky failed to translate his mention of the car incident.” In fact, the paragraph the Alicante Celts translated as Morelos’s answer to “are you at all worried about your safety?” was entirely missing from the Sky Sports website’s “full transcript of the Sky Sports News interview.”

Sky Sports’ apology at the head of the transcript was to “Celtic and Rangers football clubs (and) Morelos for the issues caused” by the inaccuracies “we have identified” (though why they apologised to Rangers wasn’t explained). After “numerous steps to verify the interview thoroughly,” Sky were “clear that at no point did Morelos allege any racial abuse” from Celtic fans (though why these “steps” were not standard wasn’t explained). They apologised to Celtic fans “for this serious error” and promised to review “our procedures for translated interviews to ensure this does not occur in future.”

This, however, was only prompted by Celtic’s official statement, released at teatime on Tuesday, announcing that the club had “today asked Sky Sports to conduct an investigation into an interview broadcast yesterday, which accused Celtic supporters of racist behaviour” after “translations provided” to the club showed “inconsistencies between the words spoken during the interview broadcast and the subtitles used by Sky Sports.”

Celtic referenced the subtitle “offensive and racist words,” which Morelos did not say “anywhere within the extended interview broadcast across Sky’s platforms.” They “asked Sky Sports to clarify their position on this matter.” And the second half of their statement was entirely given over to their abhorrence of racism, as “a club open to all since its inception” and “particularly as players and management at the club have suffered abuse persistently over the years.”

So far, so diplomatic. However, Sky’s apology for an apology brought a 400-word response from the club, of which precisely none were minced. “The statement issued by Sky Television is inadequate,” it declared up-front, eschewing the polite scene-setting which usually begins official statements. ”It does not identify the source of the translation or why phrases, which bore no relationship to the words used by Mr Morelos, were introduced into it.”

Celtic announced that they had “lodged a complaint with Ofcom, in view of the substantial issues of public interest involved.” And they published their equally, ahem, ‘direct’ communication to the communications regulator, which Celtic chief executive Peter Lawwell was, significantly, happy to publicly append his name.

Lawwell said the interview’s “presentation” was “grossly and irresponsibly misleading due to the wildly inaccurate and tendentious translation in the sub-titles.” If that wasn’t incendiary enough (it was), he claimed that “the effect and, we believe, purpose (my emphasis) of this misrepresentation was to broadcast offensive and incendiary allegations against Celtic Football Club and its supporters, by attempting to attribute these, quite unfairly, to Mr Morelos. It is difficult to think of a more irresponsible piece of ‘sporting journalism’” Blimey.

There was more. Lawwell interpreted the fact that “the interview is no longer available through Sky Television” as, “in itself, recognition of its deficiencies.” He blamed “the inaccurate translation” for “highly damaging and wholly inaccurate stories” which “were briefed to the press.”

This was “a matter of substantial public interest” because “racism and sectarianism” was “far too important to be manipulated in this way,” the mis-translation was a dangerous form of ‘fake news’ which must be condemned and sanctioned” and Morelos was “seriously misrepresented and is deserving of apology and explanation.” In that last sentence, incidentally, Lawwell sprang far more to Morelos’s defence than Rangers, i.e. at all.

Lawwell has for ages been under pressure from Celtic fans for a whole article’s worth of reasons (be warned, that article is coming). So his belligerence on this issue could be viewed as an emphatic finish into a metaphorical empty net, designed to assuage his critics. And Celtic fans have lapped it up, much in the same way as Rangers fans when their club, specifically their “PR-guru” James Traynor, stands up for them and their club.

Nonetheless, Lawwell’s letter was as powerful as it was unexpected. And it was on far firmer ground than many of the ‘Rangers-under-siege’ theories Traynor has promulgated in his years connected to Rangers’ communications strategy, as the confidence and attention to detail in Lawwell’s communication demonstrates. Traynor, of course, has successfully “stood up” to the BBC on so many occasions that their craven apology to Rangers for Monday’s Sportsound discussion was unsurprising.

Stewart was suspended, presumably, his part in that discussion. And, in fairness to the BBC, Stewart did call Traynor a “bully” and a “dangerous character.” And despite insisting, four times, that he was not directly accusing Traynor of leaking/manipulating the Morelos ‘car incident,’ he said that Traynor “tries to stoke fires and create division because he’s the guy hired to put these fires out.” Still, media outlets, including the BBC, know what Traynor is about and know how close to the truth Stewart was.

The BBC have only said they were “still in discussion” with entity unknown to ensure “no repeat” of Sportsound’s non-adherence to unspecified “editorial guidelines.” And “while those discussions continue,” Stewart won’t be “on any of our sports programmes.” Of course, the relevant programme segment shows that only Traynor has any real reason for “discussing” it. But the BBC acceding to his wishes is colossal irony (acceding to a bully when he bullies you about being called a bully) and appears to vindicate Stewart’s bullying claim…or expose BBC decision-making cowardice.

“Lamborghini-gate” and “Translate-gate,” have posed two questions. The first is simply “why?” The answer, as almost ever, is Rangers finances. Morelos is perhaps the one player whose sale might attract more than a drop in Rangers’ current ocean of debt. But during a genuine Rangers title bid that is a far harder sell to fans. So, the narrative has been ‘Morelos driven out of Scottish football,’ by harassment or racist abuse. Hence the original Lamborghini speculation and the subtitle inaccuracies.

And the second is why anybody thought such clod-hopping manipulation would go un-noticed? Especially mistranslating Morelos’s interview to the point of total misrepresentation; as if the assumption was made that no-one in Scotland would have enough Spanish to notice this. But we know why “they” will get away with it, whoever “they” are. Scotland’s football media are hopeless, wilfully or otherwise, at holding anyone to account. So, they’ll be hopeless at holding themselves to account. Indeed, dishonesty continues to pock-mark their coverage.

The Record “revealed” Morelos’s agent, Michael Gorman, was “behind the translation,” when social media actually “revealed” it (it was in my article on Stewart, until I cut it for word-count reasons). And “Record Sport” also claimed they “discovered” the interview’s inaccuracies.

So, what does Morelos make of all this? He’s not necessarily an innocent party, given the currently-accepted origin of “Lamborghini-gate.” But just now, the likeliest driver of Morelos out of Scottish football isn’t racist fans but Scotland’s incompetent, dishonest football media.

10 Years of Twohundredpercent: Ten Blasts From The Past 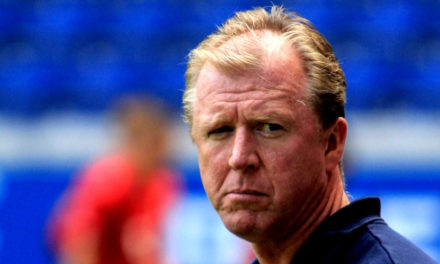