Sixty-two, it would appear, may just be the magic number. It is starting to feel as if battle lines are being drawn in the ongoing debate over the extent to which ticket prices for matches have spiralled out of all control, and if last Sunday’s match between Arsenal and Manchester City was notable for anything in particular, then perhaps two stories to have followed in its aftermath have proved to be particularly instructive in terms of showing us who will be on whose side as the argument rumbles on. First up is the small matter of the deselection of the referee’s assistant who seemed to summarise the frustration that so many supporters are feeling at the moment over not only the issue of ticket prices, but also concerning the attitudes of the people that have been the chief beneficiaries of the money that has poured into the game over the last couple of decades or so: the players themselves.

Linesman John Brooks was picked up by the microphones of the television cameras on the pitch at the end of Sunday afternoon’s match telling Joleon Lescott and Joe Hart that, “They’ve paid 62 quid over there – go and see them” after Manchester City’s two-nil win at The Emirates Stadium on Sunday afternoon. He earned himself considerable praise amongst supporters and some sections of the press for saying this – it is, of course, not known whether he realised that he would be audible on the television camera’s microphone or not – but his reward from The Professional Game Match Officials Limited, the organisation which assigns match officials, was to be deselected from Wednesday night’s FA Cup Third Round replay between West Bromwich Albion and Queens Park Rangers. PGMOL, which, as an aside, uses Wembley Stadium as its registered address, subsequently released a statement explaining that Brooks had been removed from the spotlight because this is their policy in the case of officials “becoming the story”, though it seems hard to believe that Brooks would have been given a difficult time by supporters over the events of Sunday afternoon.

The second story concerns the confiscation of a banner protesting at the ticket prices for this match that was taken to it by a Manchester City supporter. A twenty-five year old estate agent from Stalybridge took a banner to the match which had the phrase, “£62!! Where will it stop?” painted on it, but during the match he was ordered by a match steward to hand the banner over and was subsequently ordered to by two police officers who threatened him with being ejected from the ground and arrest for a breach of the peace if he failed to comply with the steward’s demands. A spokesman for Arsenal Football Club has subsequently stated that the banner had been removed because “it impeded the view of supporters and for no other reason,” but this conflicts with the claims of its owner that there had been no complaints against it from his fellow supporters, so the question of whether the club is using its own ground regulations to merely stifle any banners which paint their club in a bad light is also worth asking. Furthermore, the small matter of whether an individual should be threatened with arrest over a matter such as this is similarly valid. The Metropolitan Police’s heavy-handedness has been well documented in recent years, though, so perhaps we shouldn’t be too surprised by this.

Both of these stories have a common thread running through them. In both cases, an individual has – in one case perhaps inadvertently, in the other clearly not – made a public comment on a story that is clearly damaging to the ‘brands’ concerned, both have received praise for their comments, and both have been censured in some way for their behaviour. Perhaps it is merely coincidence that both incidents occurred on Sunday afternoon, at the end of a week at which the resentment of supporters towards has finally started to look as if it might start to reach breaking point. What they – and in particular the latter of the two stories – do suggest, however, is that there may well be turn out to be resistance from both clubs and supporters if we don’t just continue to play along to their script. Turn up, empty your wallet and purse, don’t express an opinion that doesn’t suit the narrative that we wish to write, and you’ll be okay. Break the rules, and we’ll make sure that you know not to do it again.

At the start of 2013, however, it does feel as if there is something in the air. It is, perhaps, a disappointment that this isn’t a conversation that was held ten, fifteen or twenty years ago. The young and the poor were priced out of football many years ago, and their voices weren’t heard. Even now, there are those that would seek to make the debate over ticket prices a partisan one, people who can’t see the divide between the ownership of a football club and its support, and who feel that it may be somehow preferable that all supporters may through the nose for their tickets rather than prices being made affordable for all. There are others who will continue to fall back on the oldest straw man argument in the book – that of ‘market forces.’ Perhaps we need an alternative to that catch-all mantra. ‘We’ll charge you what you like and treat you how we like, and if you don’t like it you’re welcome to walk away because there are plenty of others lining up who will pay it and will put up with it’ is a bit of a mouthful, but it doesn’t seem like it’s a million miles from the truth.

The decision that supporters have to make is not a complicated one. Are we so wedded to our partisanship – and this, it is worth remembering, is categorically not the same thing as ‘supporting’ a club – that we will only speak out on this sort of matter if it only happens to somebody who supports the same club that we do? If the answer to that question is ‘no’, then all supporters should be getting angry that a supporter could be treated like this. It has felt for some time as if football in England is at the beginning of another of its occasional periods of change. We dropped the ball at the end of the 1980s, cowed by Hillsborough, Heysel, Bradford and years of hooliganism. In 2013, however, we need to find our voice if the land-grab for English football is not to be completed without a whisper. It is starting to feel as if this is a voice that we are starting to find, but it must be a united voice and not one defined by the club loyalties that we have come to hold so dear. 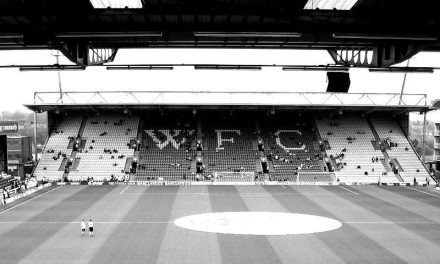 The GAA Championship: Kilkenny, Kings For A Day