Those We Have Lost: The Dell, Southampton

Tom Tully surely performed a double take when he happened upon the match report from Southampton’s final stand at The Dell. Having written so many tales of glory for Roy of the Rovers, he likely thought his work had been plagarised when news came through that the final goal at those grounds, after 103 years of football, was a match winner over Arsenal scored from the foot of modern club legend Matt LeTissier. To complete the storybook ending, it was “Le God’s” final tally in his league career, as he retired following the 2001/02 season without finding the back of the new nets at St. Mary’s. For a player whose raison d’etre seemingly was to drive in goals from the penalty spot, him being unable to score at St. Mary’s makes a certain amount of sense–his favored pinch of grass worn down in front of the keeper had been left back down Milton Road, along with the place he had kept his shooting boots for sixteen years. After all, the St. Mary’s pitch has nothing of his history recorded in its lines nor has not been properly soaked through with his sweat and blood as had the grass in The Dell.

Either that, or LeTissier had some helicopter crash that injured his foot that prevented him from scoring there.

The stands, built near “a lovely dell with a gurgling stream and lofty aspens” according to those who have read Philip Brannon’s elder scrolls, held Southampton supporters who had seen early sides that were regularly champions of the Southern League and later, when the club had settled for a spell in the first division during the late 1960s and early 1970s, witnessed European nights against the likes of Anderlecht and Athletic Bilbao under the first permanent floodlights installed at an English park. Fans of the Hampshire club perhaps experienced an odd moment when Lawrie McMenemy’s 1978/79 squad dumped Manchester City and Saints’ all time goal scorer Mick Channon out of the League Cup on their way back to Wembley for another cup final. Channon soon realized the error of parting from Southampton, however, and left City to rejoin Saints the following season and recorded a few more goals at The Dell. For a brief moment a two-time recipient of the Ballon d’Or called those old grounds home, with King Kev reigning at The Dell for a time under McMenemy. Also, there must have been a touch of saintly magic in that nearby stream that spurned the club forward to manufacture a “Great Escape” at The Dell to avoid relegation on the final match day of the 1997/98 Premiership campaign.

One of the more iconic features of the stadium was its rather quirky two-tiered terrace at the Milton Road End. By the final reckoning, the slightly makeshift upper section came to resemble three chocolate boxes, in small, medium, and large sizes, that hung over the end in suspended animation and angled in such a manner so as to maximize the cacophony of chanting from the Saints faithful to intimidate the opposition. It was in those chocolate boxes and elsewhere that a reported 24,000 fans crammed The Dell to witness Southampton’s run in the 1976 FA Cup begin in earnest over Aston Villa. The Milton Road End saw Andy Gray give First Division side Villa a 1-0 lead only to have its foundations shook later when Hughie Fischer equalised near the death to force a replay back at Villa Park.

Taking the replay over Villa, Southampton entertained Blackpool next and The Dell saw Channon throw up a few windmills on his way to a brace and a 3-1 victory over the Tangerines. Another 1-1 draw in the next round, this time away to West Bromwich Albion, allowed The Dell its next chance that campaign to savor the cup run. Channon did one better than he had against Blackpool, notching a hat trick with one more goal thrown in by winger Paul Gilchrist for good measure. The quarterfinal was drawn away to Bradford and the semi-final against Crystal Palace was fixed at Stamford Bridge, so the 4-0 thumping of the Baggies before 27,000 spectators was probably the most glorious moment in that stadium’s history. The club marched on to London with denizens of The Dell shouting to the rafters as Saints completed their giant-killing with an unlikely victory over mighty Manchester United in the FA Cup Final to bring home the club’s most significant piece of silverware.

In the 1980s, and especially in wake of the Hillsborough Disaster that mandated stadiums in the top levels of league football be all-seaters, the chocolate boxes came down, only to be replaced by an angled family section that still retained a bit of unique charm to the place. Those previous attendances of over 20,000 at The Dell were reduced down to 15,000 seated, though, making it one of the smallest venues to host top flight football in the subsequent years. In truth, the move to St. Mary’s last decade and to a stadium that doubled the seating capacity for Saints supporters appears to have been done in an attempt to give the club a chance at continuing to punch above its weight with the advent of the Premiership. Otherwise, The Dell might be preparing to host a new season of football for the Saints this fall, and much like the Fratton Park home of South Coast rivals Portsmouth, remain a small colourful ship amongst the generic destroyer-class vessels on the high seas in today’s top divisions.

Today, of course, The Dell is no more–having been leveled to make way for housing units that bear the names of five of Southampton’s most celebrated Saints. While there is much more history to cover for a stadium that saw over a century of service–including an area near the Milton Road End being bombed during The Blitz and having the West Stand catch fire from a munitions explosion during World War II–it should suffice to recall The Dell’s glory days in the 1970s when its fixtures list was choked from all the cup competitions Southampton found themselves enjoying with Channon and Bobby Stokes leading the charge for McMenemy’s squads, along with the later exploits of a Guernsey lad thrown in.

And yes, Uwe Rösler technically scored the final goal ever recorded at The Dell in a 1-0 friendly win over Brighton, but since when did we start counting friendlies? 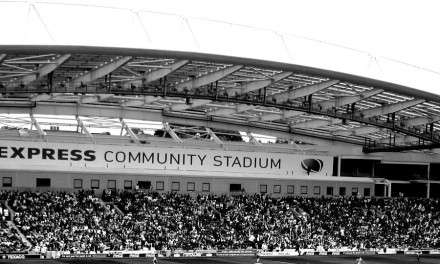