Some corners of the football world seem to have decided that this weekend is Derby Weekend. At Wembley on Saturday lunchtime, Spurs and Arsenal played out a predictably fractious draw, complete with post-match video stills confirming – as they always do – a conspiracy against the club supported by the person who posted it up, while Real Madrid and Barcelona played out their second “Classico” of the week on Saturday evening and Liverpool and Everton do their thing on Sunday afternoon. Presumably there’s market research which suggests that the first weekend in March is a prime date for these matches to take place.

At the elite level of the game, these derbies have a near-eternal feel to them because their stories have been interwoven into the narrative of the game for so long. Spurs and Arsenal’s enmity can be traced back to Arsenal’s move from Plumstead to Islington and the subsequently underhand way in which they “negotiated” their way into the top flight in 1919. Liverpool Football Club only even exists because of a rent dispute between Everton and the landlord of Anfield in 1892, which led to Everton vacating the stadium they’d used for the previous eight years and left said landlord, John Houlding, with the need to form a club to fill his stadium.

Success breeds success, of course. Some hegemonies come and go, but the majority of them don’t. The current top six clubs in the Premier League are all in the all-time English football top flight table, from 1888 to the present day. As we descend the football pyramid, however, things become more transient. It’s easy to maintain a rivalry when the two clubs concerned play each other twice a year, every year, but it becomes a bit more difficult when promotion and relegation start to get in the way. How can one retain a swivel-eyed hatred of a football club which plays near the football club that you support, when you might not have played them competitively for ten or twenty years? It’s a question that non-league football clubs face every single year.

This weekend is also a derby weekend in Sussex, and four clubs in the Premier Division of the Isthmian League are facing off against each other. Forty-odd miles away, Bognor Regis Town are at home against Worthing in a match that is being played not only between two local rivals but between two clubs still pushing for an end of season play-off place. This afternoon, though, we’re off to The Dripping Pan for the other one, between Lewes and Whitehawk, instead. There are practical reasons for this. The Dripping Pan is only a few yards from Lewes railway station whereas Bognor’s Nyewood Lane is a substantial walk from the centre of Bognor Regis, an important consideration to take into account when your company for the afternoon is a potentially cranky three and a half year-old boy.

Lewes and Whitehawk have both undergone similar trajectories in recent years. Both emerged – Lewes several decades ago, but never mind – from the primordial ooze that is County League football and found themselves pushed to a higher level than they could realistically sustain. Both fell back down the pyramid a little and have had close shaves with insolvency. And both have, over the last few seasons, repurposed themselves as community clubs, with identities that are distinctive within non-league circles. Whitehawk have their ultras, a noisy and enthusiastic fan base made up of people seemingly disaffected with the elite game. Lewes have their world famous match day posters, beach huts in place of executive boxes, and their admirable dedication to paying the women players the same as the players from their men.

Whilst the two clubs may have some things in common in terms of their identities, they’ve had differing experiences on the pitch this season. Lewes were promoted as runners-up in Division Two South of the Isthmian League and have acclimatised to their new division fairly well, going into this match still very much in the race for a place in the play-offs. Whitehawk, on the other hand, have made the exact reverse trajectory. Relegated from the National League South at the end of last season, this season has brought little respite and the team goes into this match in the relegation places at the foot of the table. They’re not down yet – and have spent a little money recently bringing in reinforcements which, as we’ll come onto, have made a difference – but they have a battle on their hands if they are to avoid a second successive relegation at the end of this season. 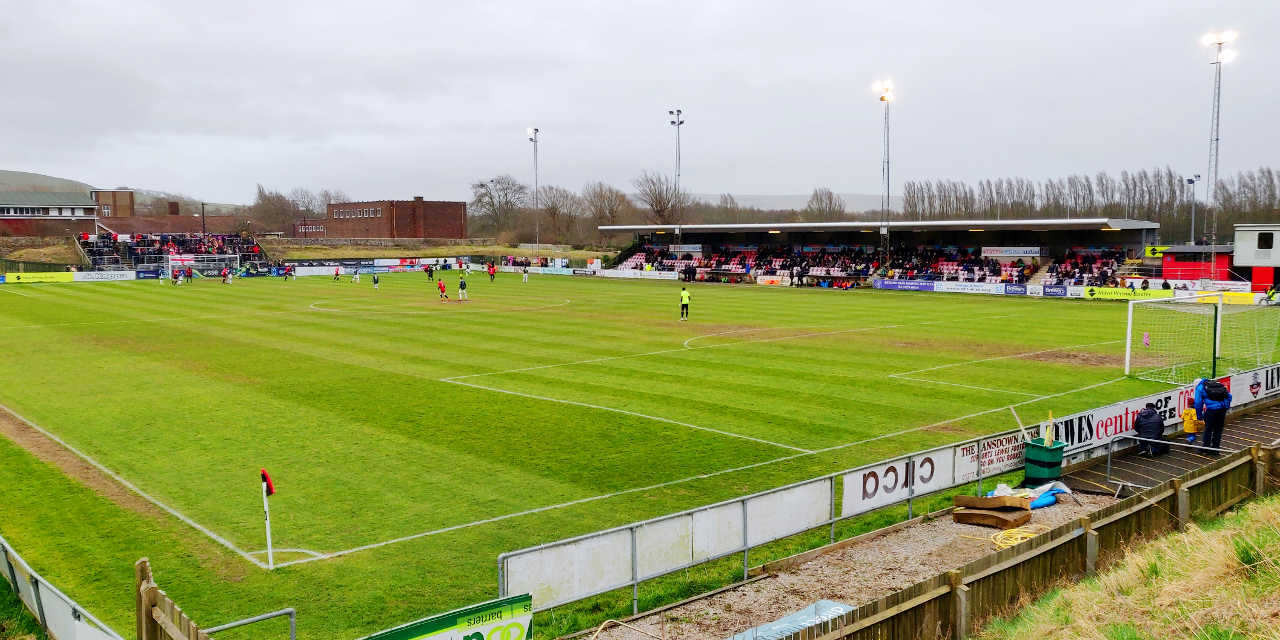 There’s a big crowd here this afternoon, as well. Almost 900 people have turned out at The Dripping Pan for this match and, whilst a large travelling support has contributed towards this, a few will also have been tempted by an offer made by Lewes of free entry for anybody who works in the public sector. Perhaps predictably, this has led to a degree of unhappiness on the part of a small number of Lewes supporters who presumably don’t see how mean-spirited they appear from their objections. Situations like this only go to underline the issue of how it is just about impossible to keep all supporters happy, all of the time. It’s a window into the reasons why it would be understandable if any club decided that to do anything of this nature at all was more trouble than it could ever be worth.

It takes ten minutes for the mood amongst the home crowd to lift, thanks to a speculative shot from Ben Pope from twenty yards out which sails into the top corner of the Whitehawk goal. An early goal up at home against a team in the relegation places, then. Not a bad position to be in. Lewes, however, fail to build on their strong start and it takes just ten minutes for Ky Marsh-Brown to roll the ball into an empty goal after the Lewes goalkeeper has been forced from his line to close the ball down. The remainder of the half plays out as per the form table. Lewes may be higher in the league, but they haven’t won in their six league matches and there’s a hesitancy about their ability to break into attacking positions which hints at why their play-off hopes have been fading. Whitehawk, by contrast, are four games unbeaten and went into this match off three straight wins. It shows. 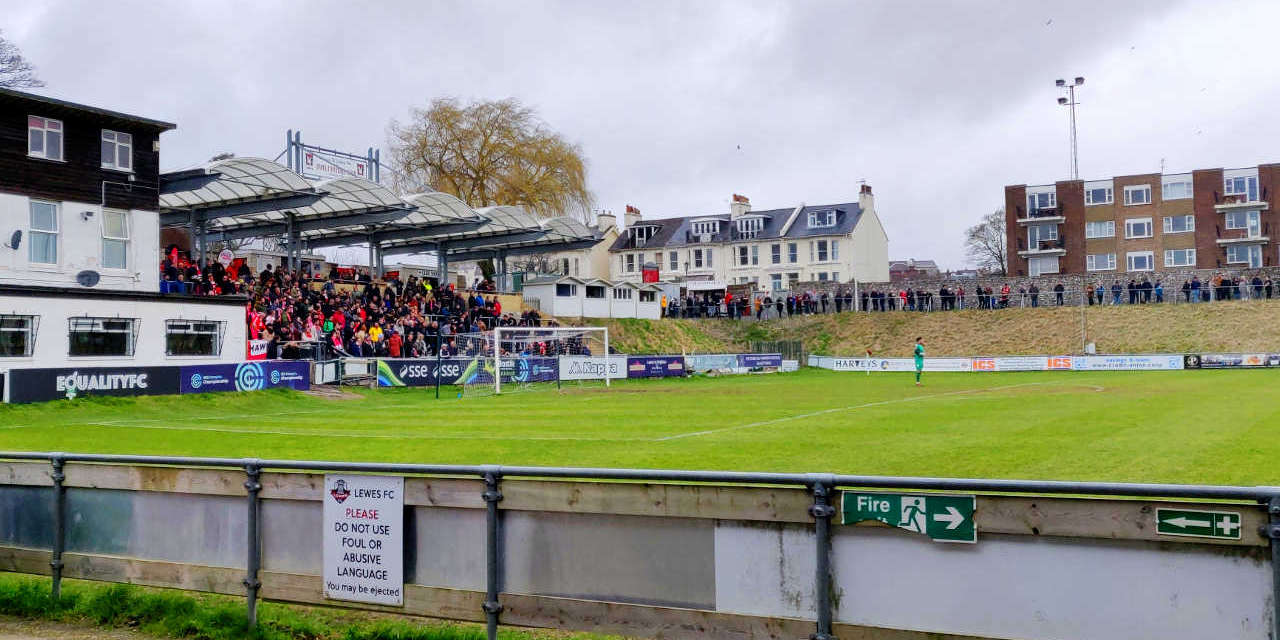 The teams get to half-time level, but fifteen minutes into the second half the Lewes defence can’t cope with a corner from (their former player) Harry Muggeridge, and Duane Ofori-Acheampong, managing something akin to (but not exactly) like a bicycle kick to score from close distance to nudge Whitehawk into the lead. The urgency and intensity builds, and Lewes finally give the impression of having awoken from their fever dreams. And with seven minutes left to play, they get a glimmer of light with the award of a penalty. It’s a harsh decision – handball for a cross which hits defender John-Paul Kissock from extremely close range – but any thoughts of post-match anger over this dissipate immediately Omarr Lawson drives his shot a couple of feet over the Whitehawk crossbar.

On this occasion, the old adage that bad news comes in threes holds true. With seconds to play of the ninety, Lewes midfielder James Hammond is carried off the pitch on a stretcher, bad news only compounded by his team having already made its three substitutions and will have to pay stoppage-time with ten players. And then, as though that wasn’t enough, with four minutes of stoppage-time played the aforementioned Muggeridge strolls straight through his former club’s defence and rolls the ball into the bottom corner of the goal to put a sour cherry on a cake that has been difficult to swallow for home supporters. 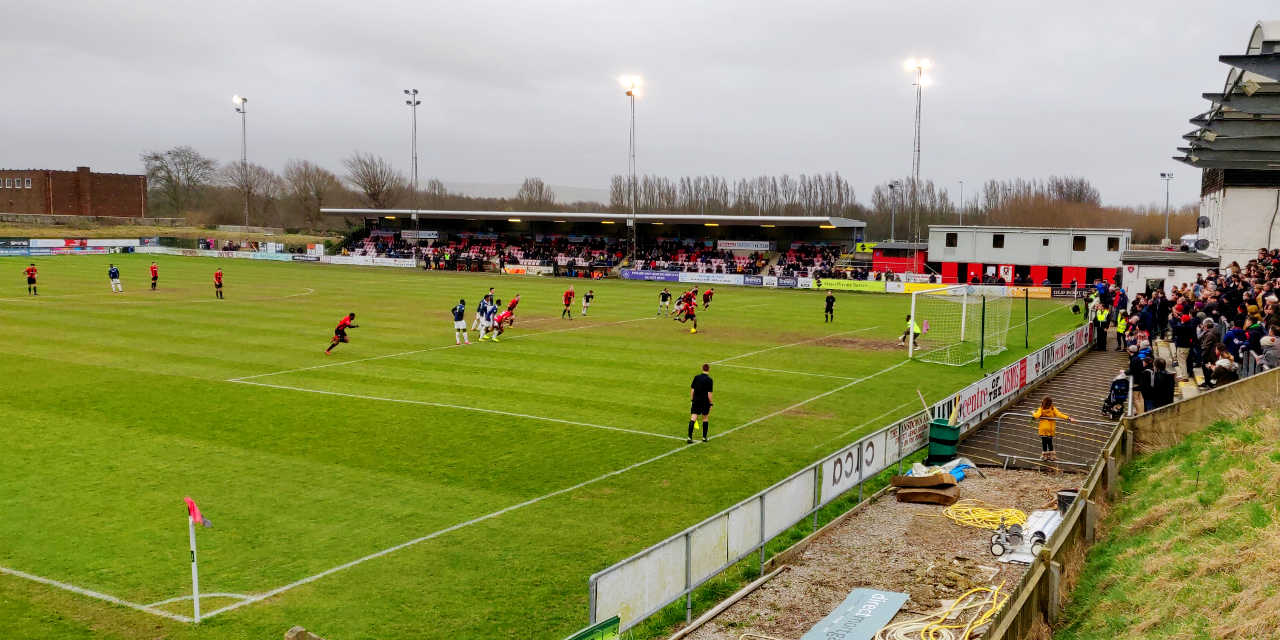 The result leaves Lewes in tenth place in the table, continuing their recent downward trajectory. With just nine points between Enfield Town in sixth place and Kingstonian in fourteenth they’re still theoretically in the chasing pack, but their form is terrible, their luck not much better, and the injuries are mounting up. A mid-table finish this season is just about guaranteed, and the summer gives an opportunity to pause for breath and rebuild. For Whitehawk, this fourth league win in a row might turn out to be the most significant of all. With this win, they rise out of the relegation places, and a team which looked marooned six weeks ago will have reached a significant milestone on the route to salvaging its season.

With more than 1,100 at the Bognor vs Worthing match (they drew two-all), around 2,000 supporters were tempted out by these non-league derbies yesterday. Derbies can’t be every week, but they do provide a shot in the arm for the finances of a club along with introducing potential new supporters who might not otherwise attend matches. Lewes had that opportunity this afternoon, but a team already stretched by injuries has seen its form dip, and shoulders clearly dropped following Whitehawk’s equalising goal yesterday afternoon. Whitehawk, meanwhile, remain on the up. Insert your own pithy finishing line about hawks here. 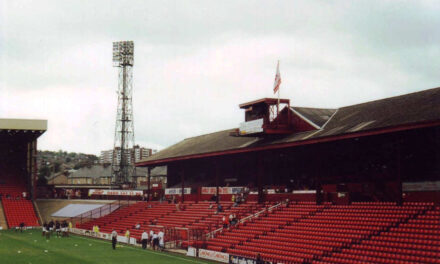