As some of you will already be aware, for the next few weeks Monday night will be literature night here on Twohundredpercent. We are delighted to welcome back Football Hobo’s Alan Smithy back to our pages this evening for the second act of his seven part epic which traces the life of the football supporter in relation to the celebrated monologue from Shakespeare’s “As You Like It” that is best known as “The Seven Ages Of Man”, or “All The World’s A Stage”. This evening: Childhood.

The crafted intrigue and wealthy families of some of Shakespeare’s most famous works wouldn’t look out of place in the modern day football landscape. He couldn’t possibly have foreseen a world of leveraged buyouts, after all he was very much of the opinion that one should neither a borrower nor a lender be, yet there’s still something rotten with the state of the game. All that glistens isn’t the Premier League trophy, after all. Yep, the Bard was well ahead of his time as far as football is concerned.

I reckon he could’ve cranked out some cracking footballing plays if he were around today, but perhaps he was more prescient about football than we give him credit for. If you take one of his most famous soliloquys, look at it from a funny angle, you might find that it was written about us fans all along. I’m referring, of course, to Jaques in Act II, Scene VII of As You Like It, and his seven ages of fan.

All the world’s a stage,
And all the men and women merely players;
They have their exits and their entrances;
And one man in his time plays many parts,
His acts being seven ages

And then the whining school-boy, with his satchel
And shining morning face, creeping like snail
Unwillingly to school.

The notion of the football fan to many of you will be that of someone who’s intently interested in what goes on in the game; travelling up and down the country to watch your side and taking every opportunity to find out all the goings on, transfer rumours and up to the minute news on the internet, radio, your phone or Sky Sports bloody News. Everything is geared around those 90 minutes once a week, but when you were in the first flushes of football love, in the second age of fan, watching a game of football was probably the last thing on your mind.

There will always be exceptions, of course, but for most of us under the age of about ten football matches were, well, a little bit boring. Dad (usually) would take us, but he’d have to bribe us with sweets and half-time nourishment, we’d get a bit tired of standing up or perhaps spend the afternoon shuffling and fidgeting around in our seats. The older you got the more you got into it, but offer the average seven year old the choice between having a kick around or sitting down and watching 90 minutes, and they’ll be reaching for the ball and heading for the door every time. O, let the hours be short, till fields and blows and groans applaud our sport.

Which of us hasn’t torn around the back garden dummying past imaginary defenders before slamming it into the top corner, commentating away in our heads as if Motson himself were watching? Wasn’t that infinitely more fun than sitting still for two hours getting cold, and not really understanding what all the old fellas around you were shouting about all the time? Scoring the winner at your pretend Wembley was such stuff as dreams are made of.

Taking the indoctrination of your formative years aside, football properly grips just about all of us in our childhood. It’s rare to see people drawn to the game as adults; it’s a vice that takes a firm hold at a young age and never leaves us. And that’s probably a good thing, because we know no better at that age. If we all had to wait until some sort of age of consent to agree to being football fans, we probably never would – the despair, heartache and frustrated efforts of our chosen teams (or rather those teams chosen for us) would either see us give up on the game completely, or we’d all become Man United and Chelsea fans. Both are thoroughly depressing thoughts. Sweet are the uses of adversity, but not that sweet.

But while we can all identify with the character sloping begrudgingly off to school with a heavy sigh, there were at least two great thing about schooldays – morning break and lunchtime.

That’s when we got the chance to throw off the shackles of our teachers and run around the playground like lunatics. When we weren’t pulling the girls’ pig-tails and running away, we’d spend almost all our time chasing after a fly-away plastic football in massed packs, or goal-hanging at one end of the yard adjacent to an ever growing pile of jackets and jumpers in the hope of poaching some glory and adulation from our peers.

Is there any age of fan more pure than that of the schoolboy? The days when excitement at a Panini was finding a foily badge in the packet bought with your pocket money rather than discovering a delicious new mozzarella filling at your local deli.

Everywhere you’d go you’d want to take your ball with you – it was incomprehensible why your Mum would intervene and explain that going out shopping would not give you the chance to practice some keepy-ups. To you it seemed perfectly logical that you could walk alongside her, dribbling and dummying past the onrushing shoppers, dropping your shoulder and imagining that you were as skilful as your heroes on the pitch. It didn’t matter that the shopkeepers probably didn’t want you playing one-twos off their windows up the length of the High Street, any and every opportunity to practise your skills had to be taken if you were to ever grow up to be a professional footballer. Which is what we all wanted to be, after all.

Yep, in the second age of fan, watching the game couldn’t be any further from our thoughts. And perhaps we were better off for it, before we ended up as bitter supporters; past hope, past cure, past help.

Vaughan Again… And This Time It Might Be Oldham Athletic 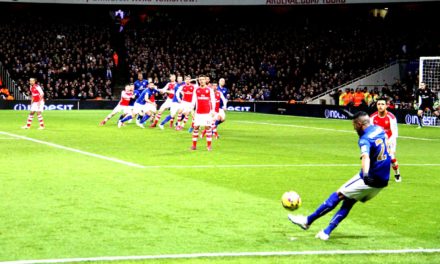