The Seven Ages Of Fan, Part Six: The Pantaloon

As some of you will already be aware, for the last few weeks Monday night have been literature night here on Twohundredpercent. We are delighted to welcome Football Hobo’s Alan Smithy back to our pages this evening for the sixth and penultimate act of his seven part epic which traces the life of the football supporter in relation to the celebrated monologue from Shakespeare’s “As You Like It”, which is better known as “The Seven Ages Of Man”, or “All The World’s A Stage”. This evening: The Pantaloon.

Love and passion are recurring emotions experienced by number of Shakespeare’s most famous characters, and run throughout his works in much the same way as they course through the veins of football fans. Much like many of his characters’ desires, the course of being a football fan never did run smooth, and our loves, whether football or female are want to bring us to tears more in sorrow than in anger.  Yet while the Bard focussed on star-crossed lovers, he probably couldn’t have imagined the relationship between us and our clubs; partners for life. I am of the opinion that Shakespeare would have been more than capable at summing up the fortunes of football and its followers in his own literary style if he were still around and writing today, but perhaps he was more prescient about football than we give him credit for. If you take one of his most famous soliloquys and squint ever so slightly while reading it, you might find that it was written about us fans all along.

I’m referring, of course, to Jaques in Act II, Scene VII of As You Like It, and his seven ages of fan.

“All the world’s a stage,
And all the men and women merely players;
They have their exits and their entrances;
And one man in his time plays many parts,
His acts being seven ages.”

“Into the lean and slipper’d pantaloon,
With spectacles on nose and pouch on side;
His youthful hose, well sav’d, a world too wide
For his shrunk shank; and his big manly voice,
Turning again toward childish treble, pipes
And whistles in his sound.”

Jacques’ idea of when you progress into the lean and slipper’d pantaloon is a little too early for those of us who chart the seven ages of fan, although we don’t doubt that the majority of us when we reach such a senior stage in life carry a little more of a pouch about our midriff. Exercise is a thing of the past while the taste for the more refined and finer things in life abounds, and you can’t bring yourself to lay aside life-harming heaviness and entertain a cheerful disposition, at least where your health is concerned.

You’re hitting your late-middle age, and while happily dodging a traditional mid-life crisis you find that your life becomes that bit emptier once the kids grow up and fly the nest. But as any good self-help book will tell you, in every problem is an opportunity. This situation presents you,  at least in theory, with more disposable income and more time in which to spend it. That, of course, works on the premise that children stop being a drain on your wallet even when they move out, which I‘m sure most of us will know isn‘t exactly true. Short of ideas, and too late to take up anything new or otherwise better yourself, you understandably return to football.

Perhaps it’s some misguided attempt to recapture your youth; it shall be raging mad, and silly mild, make the young old, and the old become a child. The benefit of rediscovering your youth in your later years is that you can prat around with the benefit of experience. You get a second chance, but one of the major differences now is that the club is not such a strong part of your identity as it had been in previous years. You don’t equate your sense of self with your support for your club the same way as you did in your salad days, but the desire to return to the old habits is strong.

You can’t truly relive your experiences, however. A season ticket in the main stand and a greater appreciation for the tactical nuances in the game are more your cup of tea these days. Your half-time drink is more a cup of tea these days, too. You can no longer take your place with the young bucks stood behind the goal – your legs can no longer keep pace with your desires. In a way this new-found love of the game is every bit as free as your first flushes of love in your teenage years – no need to scrape together the funds for a season ticket or try for those illicit underage pints in crammed matchday pubs. That doesn’t mean that every decision that you make is easy, however; that replica shirt pulled tight over your burgeoning beer belly really does you no favours at all. Your body, like your team, has seen better days.

The wisdom your later years have brought you helps to keep your emotions in check, too. Your expectations are more realistic, you don’t get quite so caught up in the whole pre-match hype and Sky Sports over-egging of every event as the biggest and best and most important since time began. You don’t live match to match in quite the same way – your life may be built around the “escape” of the weekend, but it’s more a pleasant distraction rather than the point around which your happiness pivots and your social diary revolves. Your irony detectors also go into overdrive, and prevent you from belting out with such furious fervour “we’re by far the greatest team” as you see your side skid around the middle of the lower divisions.  Your enjoyment is more intellectual than emotional now that you’ve grown up, but appreciating the game in new ways brings new joys. 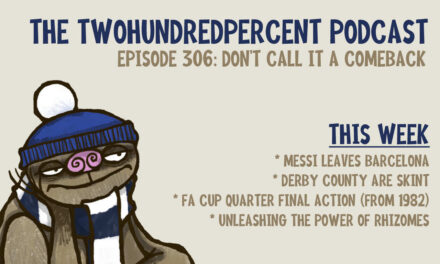