I knew it wouldn’t take long. Peter Ridsdale remains far better at taking credit than earning it. So he was always going to consider himself pivotal to Cardiff City’s promotion to the Premier League. It was just a pity that, last night, the BBC fell in with (for?) PR-Pete’s spin so readily. Ridsdale’s ability to be around when the plaudits are handed out resembles David Beckham’s when there’s a goal to be celebrated – the only thing about Beckham’s game which has ever matched his crossing ability. Regardless of what role Beckham might have had in the goal that precedes it –  even if he had little or no role at all – he’ll be there when the cameras are clicking at the bodies congregating around the goalscorer. Likewise Ridsdale when there’s quotes to be quoted on his role in a club’s success – even if there’s been little or no success at all.

Neither Beckham nor Ridsdale are without ability in their chosen profession – or their secondary profession, if you consider them primarily PR experts. Beckham was a very good footballer with occasional strokes of majesty and he remains a midway decent player, certainly for his age. And Ridsdale HAS done good things in football. But at Cardiff, like so many places before AND since, the bad soon overtook the good. And the club’s he’s left in better shape than he found them could be counted on the fingers of a mitten. I wrote recently of his time at Plymouth Argyle – a well-remunerated seven months at a club where “ordinary” staff were paid fractions of their salaries. Ridsdale was quick to take the plaudits for supporting the administration-exiting takeover by local businessman James Brent, even though he played a direct and, yes, pivotal role in extending that administration by weeks, if not months.

After Argyle left administration, Ridsdale also lauded his appointment of 31-year-old defender Carl Fletcher as manager, even though results barely exceeded those of previous incumbent Peter Reid, who had had to manage underpaid, occasionally unpaid players throughout his time in the Home Park hotseat. When Fletcher’s disappointing run of results stretched into this season, leading to his dismissal on New Year’s Day, Ridsdale was nowhere to be heard. Nor has he demonstrated any eagerness to remind us of his ‘lifelong’ support for Brent, as the Argyle owner divides both fanbase and city with his plans for developing Home Park and its immediate environs, and his draconian treatment of dissent. Instead, Ridsdale, now chairman at League One Preston North End, has started rewriting the recent history of the Premier League’s newest-comers, from a very Ridsdale perspective. The BBC published an article on its website yesterday entitled New Ground key to Cardiff’s promotion, says Peter Ridsdale. But it could as easily have been headlined Peter Ridsdale key to Cardiff’s promotion, says Peter Ridsdale.

It is only fair to say that Cardiff’s shiny nearly-new stadium did, as Ridsdale claimed, play a significant part in attracting the Malaysians who have bankrolled the Bluebirds’ success. And Ridsdale did help to restart the stadium project which had stalled under the regime of the execrable Sam Hammam, from whom Ridsdale took over in 2006. But the Malaysians who took over from Ridsdale in May 2010 had at least as much debt to clear as Ridsdale had encountered on arrival and many of the very same bills to pay (to Langston Corporation, to take the most (in)famous example). And current Cardiff moneyman Vincent Tan’s influence dwarfs that of Ridsdale, through the millions that have taken Cardiff into the top-flight, or the shameful way in which fans were almost blackmailed into the binning of club traditions, as a price for that investment.

So while Ridsdale was almost certainly right to suggest that “Cardiff City would not be in the Premier League without the new stadium,” they wouldn’t have been in the Premier League without a whole host of other things, nor WITH the debts – Langston, tax – that Ridsdale failed to clear. And while Ridsdale calls the stadium project “the proudest highlight of my career,” it was something he got over the line with huge borrowing. He borrowed to pay tax debts, too, using money for future season tickets to deal with a particularly threatening HMRC demand in January 2010, having all-but-told fans that the cash, from what was termed a “golden ticket scheme,” would fund transfer window expenditure on the team. “This financial situation,” the BBC story noted of Cardiff’s current wealth, “is a far cry from the one Ridsdale inherited.” Well… yes. But the situation is as “far” a “cry” from the situation Ridsdale bequeathed. As the article also noted, “Vincent Tan has ploughed in more than £35m,” a proportion of which dealt with that bequest.

The Beeb were remarkably polite about another aspect of Ridsdale’s Cardiff career, referencing his current disqualification as a company director, and the reasons for it, so as to make them seem like an act of philanthropy and a bit of rotten luck respectively. In a lengthy quote alongside the article, Radio Five Live’s “senior football reporter” Ian Dennis noted that Ridsdale “last year gave a voluntary undertaking not to act as a director for seven years following the collapse of his consultancy company.” That was nice of him, wasn’t it? Well, hardly, as regular readers of this site will know. It bears repetition (at least I hope my editor thinks so) that had Ridsdale not volunteered to withdraw from boardroom power, he would have BEEN volunteered out of it. He was disqualified for seven-and-a-half years – six months more than the ‘sentence’ handed down to Rangers former owner Craig Whyte, it is worth noting – for “acting improperly and in breach of his duties” as a director of WH Sports Group Ltd (WHSG).

Ridsdale co-directed the “sports and leisure consultancy firm” with his wife Sophie, who was herself disqualified for three-and-a-half years. The firm’s main, almost only, income source, was the consultancy fee Cardiff paid him before he joined their payroll as chairman in 2006. An investigation by the Insolvency Service’s Company Investigation Team (North) found, in terms for which the word “euphemistic” seems barely adequate, that Ridsdale had “caused payments totalling £347,000 to be paid into his personal bank account, held in his own name.” In other words, Ridsdale simply trousered cash that wasn’t his. WHSG went pop in April 2009, exactly six years after its incorporation, with its assets outstripping its liabilities by £456,106 – £442,353 of which was owed to HMRC in PAYE, National Insurance, Corporation Tax and a sum “relating to unpaid VAT.” And Ridsdale failed to “prepare and file accounts” for three of the company’s six years.

As the director of the Company Investigations North team Claire Entwistle said, again in euphemism overdrive: “As someone who has had many directorships, Mr Ridsdale ought to be aware of the responsibilities that come with such a position.” Well, if not, he has time to make himself aware now, even though his “barring from acting as a company director & from managing or in any way controlling a company…until 18th April 2020” appears not to prevent him chairing a football club. “When people reflect on his legacy, Ridsdale’s involvement in Cardiff has been instrumental in their success,” Dennis claimed in clumsy English, almost making the sentence sound like a command. And Dennis concluded that “supporters who bought a golden ticket can now look forward to a golden campaign in the top-flight.”

It was a sentiment that reeked of Ridsdale revisionism, linking the golden tickets to the golden campaign as if one paid for the other. “Those supporters” paid a tax bill and got Ridsdale’s club – or at least the one he was chairing – out of trouble with HMRC. Vincent Tan and his other Malaysian investors paid the rest and got Tan’s club – the one he owns and bankrolls – into the Premier League. Many supporters may not like how Tan has done that, changing the club colours from blue to red in order to be somehow more investor-friendly. And I don’t either. But when people reflect on legacies as instrumental in success, Tan will come to mind, not “PR-Peter” Ridsdale, whose efforts to grab a bit of the glory for himself are as grubby and inappropriate as they are predictable. It’s a tale I’ve told before. I hope, for the sake of Preston fans, that I won’t have to tell it again. 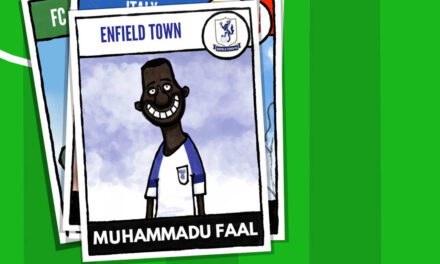 Podcast 228: Strength in Depth – A History of Non-League Football, Part 8