It is, perhaps, a reflection upon the uneven times in which we live that, upon the blowing of the final whistle at Stamford Bridge, most eyes were trained on the home dugout rather than the away one. This season has been a strong one for the lovers of schädenfreude, and perhaps, in a Premier League context at least, we may end up looking back upon this particular final whistle as the one at which it reached its peak. In his post-match interviews, there was a different sense to the Jose Mourinho in post-match interviews. The appeal for a penalty that was never given felt more half-hearted than his previous efforts on that hardy perennial. He had the look of a man that is starting to understand the unthinkable – that he may not be special enough to rescue this team, this season.

To take the limelight away from some of the other bigger clubs on this of all afternoons took some doing on the part of the Chelsea players. At lunchtime, Manchester City suffered an existential defeat at the hands of Stoke City. Torpedoed by two early goals, City spent the remaining seventy-five minutes engaged in a game of almost unsuccessful damage limitation, and at the end of the match there came the dawning of a realisation that, no matter how invigorating the arrival of Jurgen Klopp at Anfield might have been for Liverpool’s team, Manchester City were, without many of us even realising it, an accident waiting to happen. That statistic regarding Vincent Kompany did the rounds and back yesterday evening. True enough, an increasingly voluble voice can now be heard saying, Manchester City have had some terrible luck with injuries, but shouldn’t being richer than Croesus allow a club to compensate for this?

On another day, Manchester United might have taken advantage of another weekend of slumber from their rivals, but the Manchester United 2015 vintage is undergoing a personality crisis of its own. Buoyed by more than two decades of success, this team above all others is expected to win, and win in style. The winning – at least to the extent to which supporters had become accustomed – stopped a couple of years ago, and now the style is rapidly dissipating too. Against West Ham United, Louis Van Gaal’s team continued to struggle with the anaemia that has blighted their season so far. The issues being raised by the jeering of supporters at Old Trafford yesterday afternoon were subtly different to those elsewhere. This felt more like apathy than anger.

Still somehow almost hiding in the shadows even after the most publicised goal of the season so far, Leicester City seized their moment. Victory at the Liberty Stadium was a routine affair. Jamie Vardy missed out on his record-breaking goal despite having a couple of reasonable chances, and it was a stunning hat-trick from Riyad Mahrez that won them the points against a Swansea City that is starting to look like a relegation battler. Who knows, perhaps with the lifting of the burden of that record, perhaps Leicester City might even find another gear. It still feels unthinkable that they could continue to push for a Champions League place or even the title, but sit atop the rest at the moment, and that this is the case is a ray of sunshine in a far more fascinating season than many predicted.

Even the others had little to write home about. Arsenal’s home win against Sunderland was almost as convincing as it should have been, whilst Tottenham Hotspur, who were being eagerly talked of as title contenders by some less than a couple of weeks ago, laboured to a draw at West Bromwich Albion. But this was a weekend for the those clubs who usually see less of the limelight. In Manchester City have had a little bad luck with injuries so far this season, then what can we say about AFC Bournemouth? Yet the Cherries went to Stamford Bridge yesterday, won, and deserved the win. It required a late goal which received a little assistance from the returning Chelsea goalkeeper Thibault Courtois, but it was well-earned and upholds the feeling that Bournemouth aren’t the automatic relegation candidates that their post-injury slump might have suggested they were.

West Ham United have taken just three points from the five games since they beat Chelsea six weeks ago, but a point was as much as they have have hoped for from a trip to Old Trafford. West Ham supporters, who largely kept themselves entertained throughout the afternoon by mocking the home support’s apathy, certainly didn’t seem unhappy with this result, and the stock of Slaven Bilic remains considerably higher than it was at the start of the season, following that brief and unhappy Europa League adventure. And Stoke City’s emergence from the straitjacket that was Tony Pulis continues apace. Yesterday afternoon, against a team so expensively assembled that the number of zeroes on the end of the price-tags feels like an irrelevance, they sparkled and fizz, with Xherdan Shaqiri and Marko Arnautovic looking like the sort of players that their guests would pay tens of millions of pounds for.

Perhaps what has been most striking abut the last few weeks of the Premier League has been that this sense of drama has been so evenly distributed, and relatively muted. Even those who can afford a little more smuggery are keeping it under wraps at the moment. The Klopp revolution has started at Anfield but, while early results have certainly on the hole been encouraging, there remain question marks over whether the players themselves are good enough to win the league. The same goes for Tottenham Hotspur. Even Arsenal still seem stuck in a cycle of taking two step forward and one back, and the recent injury to Alexis Sanchez sent a chill down the collective spine. There are six points between the top five at the time of writing, and it may well be six between the top six by the end of this afternoon. May we feel fortunate to bear witness to such curious times. 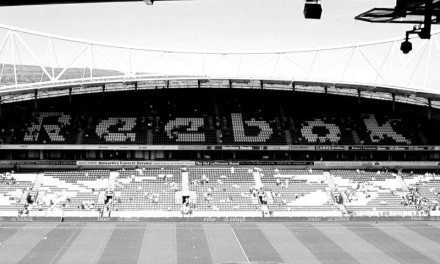 Phil Neville: A Job For The Boys