The End Is Nigh For Kettering Town

At Nene Park this afternoon, the fat lady cleared her throat. After all of the drama of the last fifteen months, it will be this afternoons Southern League Premier Division match against Bashley that will be remembered as the match at which the bells began to toll for Kettering Town Football Club. After one hundred and forty years, only a miracle can save them now. We spoke last week of the absurd scenario that played out when several of the clubs players sought to get their wages from the clubs owners, only to find that they didn’t seem particularly interested in meeting them to pay them what they were due or even discuss the non-payment.

An exodus of players was to be expected, but more optimistic supporters might have at least predicted that they would be able to field a team of some description for their forthcoming matches. This afternoon, they couldn’t even manage that. The team sheet listed only eleven players including two goalkeepers, but after one of those goalkeepers decided that he could probably think of a better way to pass his Saturday afternoon than by getting humiliated on a football pitch in front of several hundred spectators, they were forced to start their match against Bashley with just ten players. This might, under any other circumstances, have been a match that Kettering Town might have expected to get a result from. Their opponents were just one place above them in the Southern League table, after all. As things turned out, however, a hellish afternoon unfolded in front of a tiny – by the standards of this club – crowd of just 304 people. The patchwork team held its head above water for as long as possible, but they couldn’t hold out forever and the final score of 7-0 provided a fittingly dismal coda to perhaps the worst day in the entire history of the club.

At the full-time whistle, several of the Kettering Town players were seen to be in tears, as was manager Alan Doyle, the former chief scout drafted in following the completely unsurprising resignation of John Beck a few days before. Yet there was no animosity towards these players or the manager at Nene Park this afternoon. Anybody with so much as a cursory knowledge of the events in this corner of Northamptonshire over the last year and a bit knows fully well that the playing staff have been the least of the clubs problems. This is a club that has been dragged to the point of extinction by incompetent, inept management from the boardroom by a small group of individuals that have acted at every turn in ways detrimental to the club of which they appointed themselves the custodians. Imraan Ladak, George Rolls and others have killed this club.

They could have walked away at any point but they chose not to, and of or when this club finally does go to the wall – and it feels this evening like more of a “when” than an “if”, they will have blood on their hands. It was they that gerrymandered the club away from its Rockingham Road home to jump into the grave of Rushden & Diamonds by taking over their home after that club died so speedily that one might suspect that this death was murder rather than accidental. It was they that mismanaged it through last season, put it into a CVA which sold its creditors down the river and then laughed in their faces by announcing at almost the same time that their financial slate was wiped clean that they would remain a full-time club this season. They have overseen the collapse of a club that was for many years one that we might have expected to work its way into the Football League, a club with a solid identity that had represented its home town with dignity and honour, a club which commanded a loyal support-base who didn’t deserve to be treated with the contempt with which they have been treated recently.

Yet through all of this, there was something to be proud of at Nene Park this afternoon. The players, who gave everything in impossible circumstances, were given a standing ovation from the pitch at the full-time whistle by supporters who could see with their own eyes that they had been put in an utterly intractable position. The chances of saving this club, effectively insolvent and tied to a ruinous lease on a stadium miles from its home town for almost a quarter of a century, have sunk to next to nil, barring a miracle. It is to be hoped that a miracle does turn up, but where this could conceivably come from is anybodys guess. The Southern League itself now also has a stark decision to make. They might even reach the undesirable but entirely rational conclusion that there is no realistic chance of this club now completing this season, and that including them in the league is to the detriment of their competition as a while. Expulsion from the league will surely follow swiftly should they fail to fulfil a fixture, and the fact that the club was unable to field a full team for a league match today suggests that this apocalyptic scenario is now only a matter of time.

We wish that it weren’t so. We wish that people more interested in the well-being of the club had been given an opportunity to rescue it while it was still salvageable. Perhaps Kettering Town could have been saved had this happened a year or more ago, but now, on this Saturday evening in October 2012 there is no positive prognosis for Kettering Town Football Club, no likelihood of salvation and only the stench of imminent death in the air. Those responsible for this state of affairs know who they are, as do we. They must never be allowed any involvement at any football club again. Kettering Town Football Club, after one hundred and forty years, must be allowed to die in order that it may be reborn and reimagined by people that care for its long-term future. This must never be allowed to happen to this club again. Such thoughts will probably be cold comfort to its grieving supporters this evening. 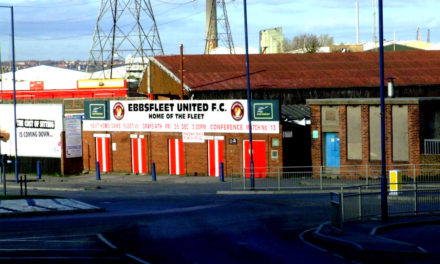 The Hamlet & The Stones: The Ryman League Warms Up For One Of Its Matches Of The Season