The 200% World Cup: World Cup Breakfast, Day 4 – We Need To Talk About Jonathan

You kind of got the feeling that last night’s match between France and Honduras might have a chaotic air to it when, for the first time that I can remember, they failed to play the national anthems before the match. That, however, was just the start of it. Reservations had been expressed on the subject of the, ahem, more forthright aspect of the Honduras game prior to kick-off, and they certainly didn’t disappoint on that level with Wilson Palacios sent off for two yellow cards before half-time when he might easily have been sent off for the foul that led to the first of those.

It was early in the second half, however, that the fun and games really began. FIFA’s insistence – on, we understand, contractual grounds because of the deal struck with the company that supply it – showing footage of the ball having crossed the line no matter what has riled a number of television viewers, but we might at least have expected that it would work properly when there was half a requirement for it to. Three minutes into the second half and with France already a goal to the good, Karim Benzema’s angled shot hit the post, bounced along the line, struck the unfortunate goalkeeper Noel Valladares, and then bounced two or three inches over the line before he could claw it back out.

Now, there was no question that the ball bounced over the line. We all saw it with our own eyes. The goal line technology correctly called this, but theway in which it was presented , leading to a sense of confusion which meant that it was almost three minutes before the teams kicked off again. If this seemed stupid, however, it was nothing in comparison with the reaction of the BBC commentator Jonathan Pearce, who continued to steadfastly claim that this was all somehow “controversial” even though we’d all seen with our own eyes that the ball clearly crossed the line. This was a viewpoint that only some in the media seemed to old. The extraordinary Richard Keys took about half an hour to figure it out, and after the match even the normally reasonably sane Gary Lineker seemed happy to peddle this line, to the apparent disbelief of his colleagues in the BBC studio.

It was Pearce, however, who bore the brunt of the ire of social media users. It’s not unusual for co-commentators to be on the receiving end of such vituperation. Indeed, it sometimes feels as if that might even be the reason why they’re there in the first place. For Pearce, though, there was no way back and he gave the impression for most of the remainder of the second half of having come somewhere close to losing his mind. Never the most popular commentator at the best of times – largely on account of his tendency to SHOUT when there’s frankly no need to SHOUT – Pearce may now need some time to rehabilitate his reputation as a broadcaster. In other news, France won comfortably, by three goals to nil.

Earlier in the day, there had been no such controversy in Brasilia as Switzerland came from behind to beat Ecuador by two goals to one. Enner Valencia had given Ecuador the lead midway through the first half, but Admir Mehmedi – who had been brought on by coach Ottmar Hitzfeld at half-time – levelled the scores three minutes into the second half for Switzerland. It took, however, until three minutes into stoppage time at the end of the match for Switzerland to score the second goal that their performance had deserved, thanks to Haris Seferovic. A big, big, win for Switzerland.

The late kick-off, of course, was Lionel Messi versus Bosnia-Herzegovina. Well, it felt like that quite a bit last night and the player delivered twenty minutes into the second half of the match at the Maracana with an outstanding goal to tie up what should have been a routine win for Argentina. This was, however, a somewhat pedestrian performance in places against a Bosnia team that might justifiably felt hard done by to be a goal down by that time in the first place, with Argentina having scored early on thanks to an own goal and the World Cup debutantes having comfortably given as good as they got from then until that point. A goal from Ibisevic with six minutes to play then threw a fresh cat amongst Argentina’s pigeons, but they held on with relative comfort and just about deserved the win. Just about.

Dreadful Clickbait Article Of The Day

Sometimes in life, it’s important to remember that making the right sort of enemies is as valuable as making the right sort of friends. So it is that this crock of absolute dreck appears on the American far-right political website National Review and we should, perhaps, pause to consider the notion that football may still capable be of doing precisely this. Make your own minds up over whether it was intended as a piece of satire or not. It would nice to think that it was, but it’s entirely plausible that it wasn’t.

Germany kick off their bid to win the 2014 World Cup later today when they play their first match against Ghana in Salvador, but for today’s classic from the past we go all the way back to 1970 and to their semi-final match against Italy at the Azteca Stadium in Mexico City, where a crowd of more than 102,000 people saw a match now widely – and correctly – regarded as the one of the greatest in the entire history of the tournament. These are extended highlights, with commentary coming from the legendary Hugh Johns. 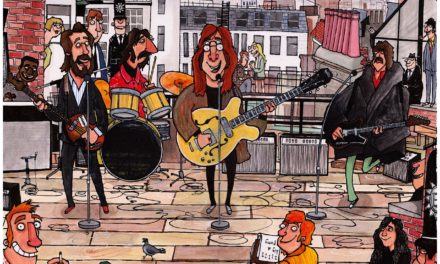