Earlier this evening on 200%, we introduced the first part of the team that will be covering this summer’s World Cup finals in Brazil. Now, it’s time for the second instalment of this, featuring a further three of those who have kindly made themselves available for the tournament for us.

Who do you think will win the tournament? Argentina. Messi to add goals to his good displays in 2010. Ronaldo to break a neatly manicured finger nail or lose his hair gel and go home crying before the quarter-finals.

Who do you want to win the tournament? Football. Oh I’m afraid so. So long as football is the winner at the end of the day over 90 minutes, plus extra-time and penalties if required. If Ukraine had qualified, I’d shout for them… just to see the expression on Putin’s face if they won.

What’s your prediction for a First Round surprise? England to come out of their group in some style. It will go apex over elbow thereafter, of course…

Which player is your one to watch? Colombia’s Juan Fernando Quintero. Given a sliver of room he can do what he wants with a football. Won’t have the spaced he had in the World Under-20s last summer but if he’s a year better than he was then, he won’t need as much space. A “number ten,” by the way. But you’d probably guessed that already.

Who is your predicted World Cup villain? I suspect Andy Townsend will like to get in and around this particular award. Appalling bias in the Miami games to add to his general ignorance and his “I’ll kick the TV screen in if he says that again” guttural rendition of “better,” every time England string a pass together – even in the first minute when there’s FA to be “better” than.

What is your favourite World Cup memory? The exhilarating mix of fear and awe as Cameroon so outplayed England in the third quarter of their 1990 quarter-final that a new world football order looked on the brink of establishment. An order brought crashing down by two Gary Lineker penalties. Sigh. In terms of less abstract concepts, Denmark’s 6-1 dismantling of Uruguay in 1986. Couldn’t get near enough to Michael Laudrup to hack him down.

Who do you think will win the tournament? Amidst the backdrop of street protests and in the shadow of the Ghost of 1950, Brazil will ride the Mystery Machine to their destiny.

Who do you want to win the tournament? Nigeria, because I want to see what excuses European clubs trot out for not employing Stephen Keshi. Oh and England. I totally want England to win.

What’s your prediction for a First Round surprise? Germany have only one striker and two early kick offs. Some of their more influential players are struggling for fitness and Reus never made the plane.

Which player is your one to watch? Josip Drmić of Switzerland is pure filth.

Who is your predicted World Cup villain? The ball. Just look at it with its beady eyes, villainous moustache and suspicious movement through the air.

What is your favourite World Cup memory? “And Ince spotted that danger in a flash and he finds Beckham. Beckham now to Owen and here’s another Owen run. He’s going to worry them again. It’s a great run by Michael Owen and he might finish it off… Oooooooh it’s a wonderful goal!” Brian Moore, 1998.

Who do you think will win the tournament? Sadly, I think it’ll be Brazil. I can’t see any of the other clubs beating them on home soil; with their shear speed and endurance putting even the “big boys” in a pickle. If Willian, Oscar and Ramires get time together on the pitch then this season at Chelsea won’t have been a complete loss after all. Mourinho will say it’s all his doing!

Who do you want to win the tournament? Apart from the obvious choice of “England”, which i typically don’t think will be the case, it would have to be Argentina. They need a good tournament and feel that their power up-top will be the deciding factor. If Messi performs, which he really is due to do, and Higuain/Aguero gets some early goals then they will be in with a real shout.

What’s your prediction for a First Round surprise? Not sure whether this is the patriotic side of me coming through but i genuinely believe England will make it through the groups – perhaps even topping it. Italy bring with them a slow and methodical tempo which could be their undoing even at this early stage. Uruguay meanwhile are great in the scoring department, breaking quickly up-field, but ship too many goals. Both of the main forward men get easily frustrated if they don’t score early on. Their warm up games have been against weaker sides and, even then, Carvani seemed to slow down when the game wasn’t going their way. Costa Rica should be the whipping boys of the group but i could see them springing a surprise somewhere. I won’t hold my breath but England have a really good chance to defy their critics here. That would really put “us” in a strong position during the ’round of sixteen’ as all the Group C teams are beatable opponents but i wouldn’t fancy playing Columbia right now.

Which player is your one to watch? Arturo Vidal is my pick for player to watch. Chile have been a real workhorse side over the last 12 months and his contributions will be the difference between victory and defeat or them. Their high defensive line can be exploited by pace, while their own attack can be frustrated by a “deep one” (well it made my immaturity laugh). He has, and always will be, their tempo setter. Able to thread a pass through a bulky defensive line and also more than capable of tracking back to cover their back four. If Vidal plays well, and his injury doesn’t hamper the performances, and you throw in Alexis Sanchez and Eduardo Vargas, suddenly Chile’s attacking power is extraordinary.

Who is your predicted World Cup villain? Wayne Rooney; because that knucklehead can’t keep his temper down. The heat will only exacerbate the side of him that no England fans want to see. Riches to Rags story in the making.

What’s your favourite World Cup memory? I have a mere 16 years worth of live World Cup memories to draw from so this doesn’t leave me with much of a choice. I really love a good villain though; whether it’s Heath Ledger’s Joker or anything Gary Busey has ever starred in. I always find myself routing for a successful world domination and Football is no different: it has to be Suarez’s handball during the Ghana match in 2010 or the headbutt that was heard around the world.

Who do you think will win the tournament? I saw a reasonably well-respected football pundit on Twitter predict that either Brazil, Argentina or Spain would win the tournament. I thought to myself, ‘when it comes to sticking your neck out, you’re hardly Deirdre Barlow, mate, are you..?’ I’m going for Uruguay, on the basis that a) they won it last time it was held in Brazil, and b) I want to see if it’s possible to hate Luis Suarez any more than I do already.

Who do you want to win the tournament? My heart says Mexico, my wallet says Algeria. I have them in the sweepstake.

What’s your prediction for a First Round surprise? I don’t know if it will be a ‘surprise’, so much as a bloody miracle if I’m still awake at the final whistle of Ivory Coast vs Japan in the early hours of Saturday morning.

Which player is your one to watch? Joey Barton, footballer, philosopher and Eurosport’s World Cup pundit.

Who is your predicted World Cup villain? Any prospective employer who decides to give me a job between now and 13th July.

Westley & Ridsdale: Together At Preston 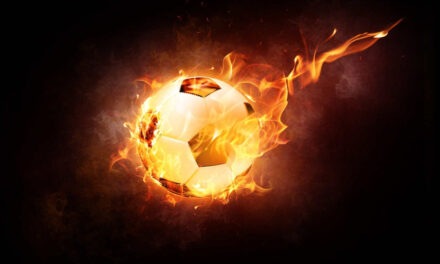 The Football League & Premier League B Teams By The Back Door