Sorry to get all parochial, but the loose ends of last season have only this week been tied up for my club, Isthmian League Kingstonian. And if you are weighing up the risks to your club of strolling onto the pitch at a vital stage of your club’s most vital match of the season in order to stick one on the opposition’s centre-half, and strolling off again, unchallenged, this will be of interest to you too (although I strongly suspect no such person would be reading this website).

To recap briefly, Kingstonian missed promotion to Conference South (or Blue Square BET South, as it’s now catchily known) when they lost 2-0 at Boreham Wood in the play-off final on May 1st. Over the 90 minutes, Wood were the better side, with their second goal a wonderful long-range range effort worthy of winning games far higher up football’s pyramid. But with the game still scoreless, and Kingstonian having their best spell, a Boreham Wood fan strolled on to the pitch, hit our centre-half Francis Duku, and strolled off again, unchallenged by players, stewards or police.

Kingstonian appealed to the Ryman League, protesting that the incident had a significant impact on the result, and asking for a replay. Among supporters, there was far more hope than expectation of the replay, even though Ks were understandably less keen to attack the end where their centre-half had been attacked & a case could be made that the game was influenced by the incident. But there was disappointment, if little surprise, that the Ryman League passed the incident onto the Football Association (just like FIFA’s version of Germany v England, the Ryman League’s account of the match treated the major source of controversy as if it never happened). And there was a similar reaction when we heard nothing whatsoever in time for a replay to be staged (the fan himself was arrested and has been banned for life by Boreham Wood, although only a mixture of police utter incompetence and Boreham Wood utter shamelessness could have prevented that).

Yet even while prepared for disappointment, the FA’s response to the incident, which finally emerged this week, has taken some of us aback. Boreham Wood’s chairman, Danny Hunter, had this to say:

“I am aware that we have attracted an element of support whose behaviour is both unwanted and totally against what our club is about! I am determined that wrong-doers are found and given lifetime bans from the club. I will not accept the good name of Boreham Wood FC being ruined by a mindless minority of morons. Rest assured I will not sweep these things under the carpet.”

Admirable sentiments, well-expressed. Unfortunately, he said these things in 2002. And, as can be seen from what the FA had to say this week, they didn’t mean a damn thing. To anybody. The FA acknowledge that a “Kingstonian player was assaulted,” which represents the first official acknowledgement within football that such an incident occurred.  But this is the high point of the response, received from the FA’s “Senior Manager, Stadia Safety and Security,” Chris Whalley (insert your own comments about his name here). Mr. Whalley notes that Boreham Wood “deployed 14 stewards and that police officers were also present in the ground.” Yet still a Boreham Wood fan strolled onto the pitch, hit our centre-half, and strolled off again, unchallenged.

He adds that “after the incident, police and stewards were sent to the area where the assault occurred to show a presence and no further incident occurred.” This “area” was the “area” where the vast majority of home supporters were congregated. The “police and stewards” had to be “sent there.” Which explains why a Boreham Wood fan strolled onto the pitch, hit our centre-half, and strolled off again, unchallenged. Mr. Whalley continues, “The FA has given some operational advice for Boreham Wood FC to consider when staging a promotion play-off final or similar high-profile match.” One hopes this “operational advice” includes: “Don’t let a Boreham Wood fan stroll onto the pitch, hit the opposition centre-half, and stroll off again, unchallenged.”

The best, as ever, is left to last. Mr. Whalley concludes: “The FA has decided not to take any further action in this matter. Boreham Wood FC have been advised that we may have to consider disciplinary action against the club if further reports of spectator misconduct should be received.” And… er… that’s it. In the same statement in which they acknowledge that a Kingstonian player was assaulted by an opposition supporter during a match, the Football Association have refused to hold the host club accountable or responsible in any way and have taken no action against them. None.

Another remarkable aspect of this cowardice is the reference to “further reports.” This IS a “further report.” Hunter’s diatribe from 2002 referred to all kinds of unsavoury behaviour at an FA Cup replay with Bishop’s Stortford, including the phrase “from the plastic bottle throwing incident to the smoke pellets.” Doubtless, the club were told “not to do it again” or some such mealy-mouthed nonsense, probably with an “or else” clause attached. Well, oops, they did it again. And there isn’t even a promise of action if they do it again, again. “We may have to consider disciplinary action,” (my emphasis) is what Whalley wrote.

And, in fact, Boreham Wood fans have done this again, again and time and again. Many supporters at this level of the professional game have their own tales to tell about the sort of people Boreham Wood seem to attract to “big” games. We “know” what to expect at big games at Boreham Wood. (these people aren’t among the true Boreham Wood fans, the 100 or so hardy souls who turn up to ordinary league games, but that absolves the club from no responsibility). If “we” know what happens, I refuse to believe that the Football Association do not (the 2002 incident was at an FA Cup game, remember). Kingstonian’s co-chairman Mark Anderson referred to this in his formal response, commenting: “It is widely known that Boreham Wood have suffered crowd trouble on a number of previous “big match” occasions, and there is no doubt it will happen again.” The FA’s disdainful treatment of the incident only backs up Mark’s point.

During a re-run episode of “Yes, Prime Minister” this week, the programme’s most common joke got another airing. “That’s a brave decision, Prime Minister,” someone says, inducing a panic-stricken “Is it?” from said PM, suddenly fearful that he might actually be about to do something. I defy Chris Whalley to explain the decision to which he put his name in any terms other than that fear. In short, Boreham Wood have got away with it. And the FA have deemed it acceptable for a Boreham Wood fan to stroll onto the pitch, hit the opposition centre-half, and stroll off again, unchallenged. Take that, Boreham Wood! 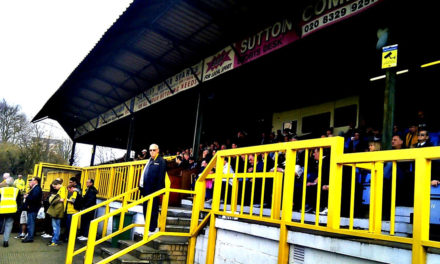 The FA Cup Second Round: Spoilt for Choice