Football Shorts: If I Were A Rumpty-Tumpty Cup Referee

The eagle-eyed amongst you may have noticed that another round of matches in the EFL Trophy – which, as Twitter followers may already be aware, I have opted for no particularly good reason to rename The Rumpty-Tumpty Cup – was played out this evening, and that at the match between Newport County and Wimbledon, the referee got himself injured, which led to a call having to be put out for somebody from the crowd to assist on Twitter.

IMPORTANT ANNOUNCEMENT: Due to injury the referee is unable to continue! If you are a qualified official please contact a steward!

Now, this particular tweet has, at the time of writing, been shared just over 1,000 times, which is not too far shy of three times the size of the crowd of 368 that turned out for the match. An impressive night for the Exiles’ social media standingm if not necessarily for this dismal, withered husk of a football tournament. Like many people, I’m no longer angry about what the Football League has done to the Football League Trophy. It’s really only worthy of our pity at this stage in proceedings.

But “what ifs” are a fundamental part of being a football supporter, aren’t they? And it only takes a little suspension of disbelief to believe that it may be possible that one of us could one day be ushered out onto a pitch to administer our own patented form of justice to a group of (probably largely unsuspecting) players. After all, Jimmy Hill famously ran the line at Highbury for what was not only a First Division match between Arsenal and Liverpool, but which was also being broadcast on the television the following day.

Now if Jimmy Hill can do that, why shouldn’t I be allowed my ninety minutes of infamy in the grouop stages of the Rumpty-Tumpty Cup? It’s not like anybody other that Sean Harvey cares about it, after all. And the Guardian reported only today on the 1986 GM Vauxhall Conference match between Northwich Victoria, when an outbreak of flu in the Northwich camp resulted in three supporters playing for their team at The Drill Field against Maidstone United.

We could add a twist to the Rumpty-Tumpty Cup itself. Allowing a home supporter to referee the match and be as biased as he or she liked may well bring the crowds back to this already moribund competition. Our job, however, is not to give the Football League ideas that they might take up, though, so it’s back to Rodney Parade on a cold, wet night in November 2016 and to that world in which I have somehow managed to convince the officials present that yes, I am most definitely a FIFA qualified referee and that I should be allowed to take this charge of this match. I would be the worst referee in the entire history of the game, and I would absolutely love it.

Here’s my ten point plan for ensuring that my first (and definitely last) refereeing performance in the professional game would at least be memorable.

Bearing the above in mind, perhaps it would now make sense for the Football League to allow home supporters to enter a raffle to referee the matches. It would save on costs, and you wouldn’t want me turning up unannounced, declaring the referee “missing” and taking control of proceedings now, would you?

With many thanks to Twitter user Dewi Osian Clarke https://twitter.com/DewiOsian for the final suggestion. 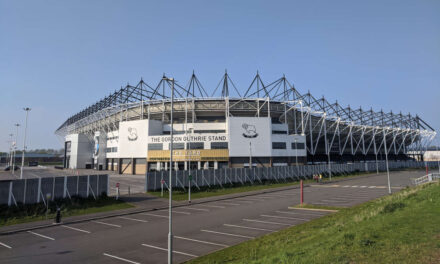 Relegation Rumbles On & On, Part One: Macclesfield Town