Having been born in 1972, I was probably of the first generation to have computers at home from a young age. My first machine was a ZX81, bought in 1982 in the vain hope that I would ever get any useful from a computer. It was an angular chunk of cheese with a keyboard that literally couldn’t have had a worse designed keyboard, 16kb of RAM (if you plugged this mildly dangerous looking expansion back into the back of it), had a black and white only display and was silent. A year or so later, I graduated onto the ZX Spectrum, where I stayed until the concept of girls, alcohol and fun became a part of my life. After losing interest in about 1988, I didn’t really return to computers until 1992, by which time my friends had started getting either Commodore Amigas or Atari STs.

Football on the ZX Spectrum was most successfully a strategy game. Football Manager, released not long after the launch of the machine, was one of the machine’s true breakthrough games. But arcade style games were limited in all manner of scope. The “best”, by fairly common assent, was “Match Day”, released by Ocean Software in 1985, it ran smoothly and the graphics were good for the time, but it played glatially slowly. The ZX Spectrum didn’t have the power to accurately represent the feeling of playing football, or even really a feeling of playing football.

Sensible Soccer changed all of that, for me. The ascendence of Kick Off, released in 1988, had come shortly after I’d lost interest in staring at a television set playing games and taken my drum-playing into a band and onto the local gig circuit. I missed Kick Off 2, as well, for much the same reason. By the time that I saw Sensible Soccer, it was the first arcade football game that I’d ever played that somehow gave me the same feeling that I got from playing the game. It was slick. It was fluid. And it was more fun than simulation, which doesn’t really matter if you’re getting the same endorphin rush either way.

This documentary, presented by the outstanding retro games reviewer Kim Justice, is the story of the game, from its origins, through to the various attempts to breathe life back into a failing franchise. In 1993, though, Sensible Soccer created, for me, at least a feeling of how a football came played on a home computer or console for the first time, and that feeling would come to stay with me for many years, though it’s slmost entirely gone. Before too long, my own chilldren might well be playing them. If they want an easy win, I dare say they’ll be tapping up their old man, and I can’t say with 100% confidence that I won’t make a bit of a fool of myself over it. The eleven year old who took Blackpool to the First Division Championship on Football Manager in 1983 would be appalled.

Podcast 228: Strength in Depth – A History of Non-League Football, Part 8 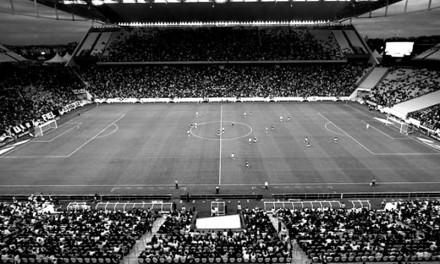