The relationship between football clubs and the local newspapers of the areas that they inhabit has long been assumed to be a mutually beneficial one. On one side of the equation, in an era during which the print media is undergoing a period of trauma that has destabilised the entire industry, one guaranteed source of income is likely to be football supporters who want the level of detail that a local newspaper with a journalist dedicated to covering their club can offer. On the other, meanwhile, the coverage that a local newspaper can offer a football club is difficult to ignore and might well be considered to be something approaching free advertising for what is ultimately a business which, especially below the Premier League, most likely needs all the advertising that it can get.

This isn’t, however, to say that the relationship between local newspapers and football clubs can’t be or isn’t often fractious, and in recent years there has been an upward swing in the number of clubs that have, for various reasons, banned their local newspapers from entry into their grounds for reasons that have frequently seemed to be on the whim of whoever is controlling that club at the time. Most notably of all, Newcastle United have come in for considerable criticism for banning their local press from the club, most recently for having the temerity to report on a protest against the club’s owner, Mike Ashley. Such a Pyongyang-esque attitude towards the nature of a “free press” is indefensible, but this doesn’t mean that it isn’t becoming increasingly commonplace.

The latest local newspaper to find itself on the wrong end of the ire of a football club is the Stoke Sentinel. Last week, the newspaper ran a seemingly innocuous story about the late delivery of replica third shirts to people that ordered them, but last weekend it was advised that its reporter would not be allowed entry into Vale Park. The newspaper itself has reported that the club has now demanded a £10,000 annual fee to retain the access that it has enjoyed up to this point. The paper’s withering editorial on the subject made it clear that it feels that it has done nothing wrong in this respect. Indeed, it points out that its coverage of the shenanigans surrounding an attempted takeover of the club was instrumental in ensuring Smurthwaite’s arrival at Vale Park in the first place.

So, what could possibly be the motive behind the owner of the club acting like this? After all, Port Vale were promoted from League Two at the end of last season and the club has had an encouraging start to life back in League One, sitting in ninth place in the table at present. What was deemed so important about this story that it should result in a sanction that the club must surely have realised would bring it so much bad publicity? Speculating upon this would be something of a fool’s errand, but the demand for an annual payment of £10,000 not only breaks all protocol in terms of how clubs interact with the press, but is also likely to raise questions over the small question of why the Sentinel would be allowed back into Vale Park in return for paying a £10,000 fee if the crime that it has committed has been so heinous as to warrant a ban in the first place. Is, we might reasonably ask, there now a price to be paid for a free press?

Port Vale Football Club is, after all, hardly the beneficiary of being in a one club town, and we might reasonably suppose that fighting for publicity when your local rivals are a well-established Premier League club – Stoke City, of course – and you are plying your trade two divisions below them. It hardly seems likely that being unable to cover Port Vale would mean that the newspaper’s sports section will wither and die. Indeed, if this dispute cannot be amicably resolved it would not be surprising to see its sports pages fill up with more coverage of – and, by extension, promotion for – the other two local clubs in the area, Crewe Alexandra and Stoke City, instead. And there may well be howls of protest should this unwanted situation come to pass, but it would hardly be surprising if it did and responsibility for such a situation coming to pass would be difficult to lay anywhere other than at the main entrance to Vale Park.

Perhaps the club will be just fine without any coverage in its local newspaper. Perhaps supporters will be happy with all of its news coming from the unquestioning source of the club’s official website. But perhaps they won’t, and in addition to this we might well wonder what might happen to independent voices, such as the excellent supporters site One Vale Fan, should they start to question aspects of the running of the club? The sledgehammer that the club has taken to the Sentinel over this matter hardly fills us with great confidence. One of the key changes that we have seen in the media in recent times has been its democratisation and, whilst the urge of any business or institution to seek to control what is written about it may be understandable (even if we might not agree with it), all football clubs should be reminded that this particiular genie has been released from the bottle and won’t be returning any time soon. Whatever the precise nature of the dispute between the Stoke Sentinel and Port Vale is, it should be resolved as quickly as possible and normal service to the supporters of the club as soon as possible. Because ultimately it is likely to be they who will suffer the most as a result of having this highly experienced and independent eye excluded from the club. 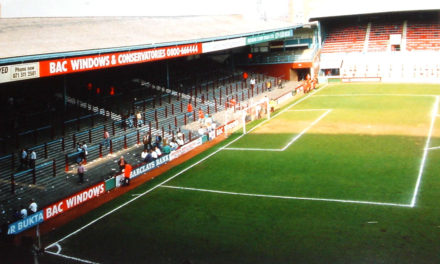