Below is full text of Pompey blogger Portus-eg’s findings regarding events at Pompey at the time of the sale of the club by Portpin to CSI in June 2011. It makes interesting reading.

Exasperation is the word that currently sums up the feelings of many a Portsmouth fan, following the latest adjournment yesterday of the PKF v Portpin case regarding the valuation of Fratton Park. Over the last ten weeks or so, Pompey haven’t won for seventeen games, PST announced they would be buying Fratton Park outright and the Mayans calendar proved to be as accurate as the Pompey 2013 one. Yet the club’s supporters remain in limbo about the Portsmouth Supporters Trust taking the club over. Why is that? There are some dark mutterings regarding PKF’s handling of the admin, I will leave that aside for now for others to comment on such as the excellent SJ Maskell has done in her latest blog, but there’s one issue outlined in this narrative where exasperated just doesn’t cut it – apoplectic may be more appropriate.

Directly below is an extract from PKF’s document lodged at Companies House recording the vote of creditors passing the proposed CVA on the 25th June 2012. This Document is dated the 28th June 2012: 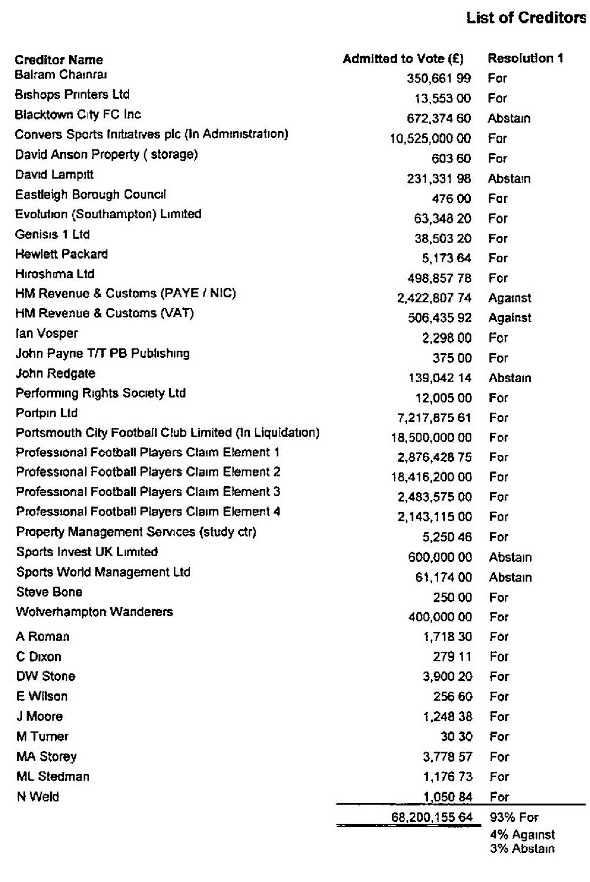 There’s nothing extraordinary on this list at first glance, although some frown-inducing names do crop up. Balram Chainrai, for instance, personally had £350k worth of votes and Portpin had £7.217m worth. But who, however, are Hiroshima Ltd? They appear to be two different Hong Kong based firms operating under the same name. One of the Hiroshima Ltd’s address is 16F, Yue Hwa International Building, 1 Kowloon Park Drive, Tsim Shai Tsui, Hong Kong, with a listed main contact named one Raj Kakessery, who is described as an independent financial consultant. According to records, they are an ‘exporter of light goods.’ This address is the same as for Hornington Enterprises Ltd, which will already be a familiar name to those following this Pompey saga for the past few years as Balram Chainrai’s main company, founded in 1984. Also at this address is another company, Hari Holdings Inc., which is run by Balram’s father Parasram.

There’s also company called Hari Importers & Exporters Ltd UK, based in London and at which Balram’s brothers Deepak and Anup are listed as directors. Also operating out of this address also are Himz Logistics Ltd (a global freight company) and H Rangel Industries, a known offshoot of Hornington. The other Hiroshima Ltd, meanwhile, which is located around the corner at Room 401, 4th Floor, Universal Commercial Building, 69 Peking Road, Tsim Sha Tsui, Kowloon, Hong Kong, is a licenced money-lending firm. Finding any named directors for this company proved to be fruitless. One of these Hiroshima Ltds is an entity run by the Chainrais, whilst the other is an anonymous money-lending firm with the same name. One of those “Pompey” coincidences, two companies with the same name. So what has a Hong Kong money-lending firm or/and a light goods exporting firm with the same name got to do with Portsmouth Football Club 2010 ltd?

To answer this, we must cast our minds back to Portpin’s second spell of PFC ownership between October 2010 and June 2011. During this time the Football League were keeping a tight rein on Pompey’s financial dealings, and club accounts had to be sent to the Football League for regular checks whilst Portpin were banned from putting any extra debt or security onto the club. Portpin also had to provide an interest free overdraft facility which they did to the tune of £1m. Thanks to the terms of the Football League agreement with the club Portpin had to adhere to those terms or else the club’s League membership would be forfeited.

Things changed though when CSI first started sniffing around the club at the beginning of February 2011. As Portpin began negotiations with CSI in the same month they promptly stopped paying bills. Tal Ben Haim for instance stopped getting paid and his wages tab rose to £2m+ while £2m of other urgent outstanding debts were run up. So, when CSI eventually took over on June 1st 2011 and ‘invested’ their money, about half of it went on paying the bills Portpin had accrued since February. The overdraft facility that Portpin had provided took a hammering in this period and had reached the £1m limit quickly. Portpin’s problem, as they presumably saw it, was how to get that £1m back out without the Football League noticing which meant devising a scheme not directly related to the Portpin’s overdraft facility.

Transpiring events during this period seem to suggest Portpin may have hit upon the idea of taking out the season ticket money in cash. At first, though, Portpin encountered problems with this plan. Barclays Merchant Services at the time didn’t allow the club to have their season ticket money up front because of a very real fear of the club not completing the season. It was released in equal 1/23rds as each home game was played. So then Portpin instigated the cash & cheque only Early Bird scheme. But many Pompey fans were wary of Portpin and the Early Bird scheme and it only brought in a relative trickle of money. Undaunted by these failures, Portpin apparently then came upon the idea of using Zebra Finance Ltd. Zebra are a reputable finance company who specialise in providing finance to fans to buy their season tickets – used by Manchester United, amongst many others. The idea was that Zebra would take credit card payments, advance the money to the club then receive it back from Barclays Merchant Services in 23rds and take a cut.

Barclays realised that this was happening and stated they wouldn’t accept that arrangement for legal reasons. Seeing as Portsmouth had no chance of getting any other merchant services firm to take their business due to the state of the club finances, Barclays could effectively dictate business terms to the club who were powerless to do anything about it. So Portpin then came up with a variation and it went something like this:

Of course the problem with this latest Portpin wheeze was two-fold;

So, despite warnings from both inside the club and outside, Portpin sought legal advice too and decided to press on with it anyway. Consequently, when CSI came in they found that approximately £800,000 worth of season ticket money hadn’t come into the club as it should have done, it instead went to the unwitting Zebra then to Hiroshima. Portpin’s plan to get back the £1m had almost worked perfectly but not quite in the timescale they had to carry it out fully, no doubt not helped by CSI’s subsequent plunge into administration. However, the remaining £200,000 is a figure that Portpin apparently haven’t given up on, hence the claim by Hiroshima. The amount of £498,000 is staggering, two and a half times the original amount, another example no doubt of Portpin’s “generous” interest rates on money deals, this time a mind-blowing 2,998% – unless,of course, there is something else relating to these transactions we don’t know about.

That oversight could be forgiven as a genuine mistake, but PKF haven’t done themselves any favours by appearing to have verified an astonishing increase in the amount apparently owed to Hiroshima (from approx £200,000 to £498,000) by allowing them to vote at the 25th June creditors meeting even though they were not actual creditors of PFC 2010 Ltd, according to the creditors list PKF that put out in their April 2012 document. For Hiroshima to be a creditor of PFC, they would have had to have offered some services or goods that PFC would have paid a fee for. A transaction of some sort would have needed to have occurred. In this case it didn’t as the Zebra/Hiroshima arrangement was arranged by Portpin themselves, not the football club, as far as anybody knows.

How could PKF have allowed Hiroshima to be creditors of PFC 2010 Ltd? Zebra weren’t aware that the money wasn’t reaching the club as after all the arrangement was made with the owners of the club – Portpin – so why would Zebra think there was something untoward? Hiroshima, from what has been seen, appear to be charging PFC half a million pounds for holding onto approx £800,000 of PFC money which they have kept anyway. It feels like something approaching having a savings account with a bank and the bank charging you two-thirds of your savings value in charges after first nicking all of your money. And how were these figures agreed by PKF?

The dismay-inducing tale above is reminiscent in some respects of Portpin taking the Younes Kaboul transfer money in 2010. Back then, despite knowing there were untold amount of other creditors out there, despite knowing the club was way behind on paying everyone, despite the fact there were PL rules/legally binding agreements in situ, Portpin, when it comes to getting their money, took it anyway they could. Portsmouth supporters long ago tired of all these strokes, tricks, schemes etc involving Portsmouth Football Club. Roll on the day when the PST bid to run the club properly. It’s time for all supporters of the club to back the PST bid for the good of Pompey.

The views expressed here are those of Portus-eg.