As Brighton & Hove Albion and Plymouth Argyle took the pitch for their League One match last night, the immediate prognosis for the two clubs couldn’t have looked more different. While Plymouth have just been deducted ten points (which has sent them plummetting to the bottom of the table) and are set to enter into administration unless they can find a new buyer in the next couple of weeks, Brighton are sitting pretty at the top of the table and are set to move into their 22,000 capacity new stadium at Falmer during the summer. On the pitch the two clubs’ differing fortunes were concisely played out as Albion won by four goals to nil, but the match was particularly notable as being an opportunity to thank one particular Plymouth supporter for a suggestion which inspired a very unique protest when it was Brighton that were the club in a state of crisis.

The asset-stripping of Brighton & Hove Albion during the mid-1990s was one of English football’s most shaming episodes of the decades. As David Bellotti and Bill Archer systematically ran the club into the ground and evicted it from The Goldstone Ground, the authorities stood idly by. Supporters of other clubs, however, were appalled by what was going on at Brighton and this was articulated by one Richard Vaughan, a fourteen year-old supporter of Plymouth Argyle, on a Brighton forum in December 1996:

I see the scum FA have now taken 2 points who do they think they are they wouldn’t do this to Man United. It makes me sick what is happening to your club and it’s an insult to your fans. I’m a Plymouth fan and I think that one week when we’re away I`m going to come up and support your protest. I think it would be a good idea if LOADS of fans from different clubs turned up at Brighton (with their shirts on) and joined in it would show that we’re all behind you 100%

The post was impassioned enough to form the seed of an idea in the minds of Brighton’s supporters and campaigners. The team’s form had been predictably dismal and the atmosphere at The Goldstone Ground for every match was a fog of despair and anarchy, but the idea of trying to co-ordinate a day of protest against the treatment of Brighton & Hove Albion by the game’s authorities as well as the club’s owners seemed like something that might just work. So it was that a home match against fellow strugglers Hartlepool United was selected and, on the 8th of February 1997, English football saw its first Fans United day, as thousands of supporters from the length and breadth of the country – as well as a party from the German club Eintracht Frankfurt – descended upon the south coast.

The atmosphere inside The Goldstone Ground that afternoon had an electrifying effect upon the home players, and Brighton won the match by five goals to nil. The battle to save The Goldstone was lost – the deal had been done, and Brighton would spend the next two years ground-sharing at Gillingham before returning to their home town to play at The Withdean Stadium – but other battles were won that day. Brighton stayed up on the last day of the season on goals scored, thanks to a draw against Hereford United. The margin that kept them up was… three goals. That win and those five goals against Hartlepool United turned out to be very valuable indeed. Moreover, although there had been successful protests at clubs before – the combined protest between the supporters of Reading and Oxford United over Robert Maxwell’s proposal to merge the two clubs as Thames Valley Royals in 1983 spring immediately to mind – but this was something quite different: a show of solidarity and disgust on the part of all football supporters at what had happened and been allowed to happen at Brighton.

Fourteen years on, some Brighton supporters still remember Richard Vaughan and his contribution to their club’s survival and a message on the Plymouth forum managed to track him down. The short notice and the fact that the now twenty-eight year-old Vaughan has children and work commitments meant that he was unable to attend the match between the two sides last night – such irony that the last match between the two clubs before Brighton’s return to a true home of their own should come in this of all weeks – but he did send Brighton a message that was read out at half-time last night and was warmly received by the Brighton crowd.

Subsequent Fans United days have never quite managed to hit the undoubted highs of that first one at The Goldstone Ground in February of 1997. At the time of the Brighton protest, English football was approaching the height of its first generation of financial madness, yet the lower divisions were being run to rack and ruin by a generation of asset-strippers, fraudsters and hucksters. It felt as if no-one cared, but Richard Vaughan did, and the thousands that travelled to The Goldstone Ground on a foggy day in February 1997 did as well. It is to be hoped that, even if there is no protest of this nature for Plymouth’s supporters or for those of other clubs that find themselves in a predicament due to the mismanagement or avarice of those that choose to use the custodianship of football clubs as a trough from which to feed themselves, as many people feel this empathy as did in 1997. After all, there bur for the grace of God go the rest of us. 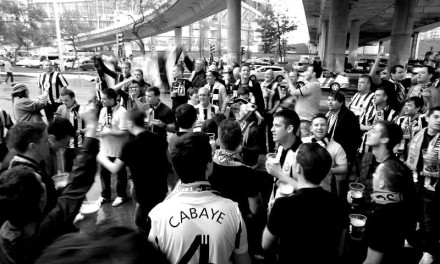