Plymouth Argyle And The Devil They Know

It looks as if the battle to avoid relegation from League Two is going to go to the wire. With eleven games of the season still to play, just six points separate Dagenham & Redbridge in sixteenth place in the table at Wimbledon, who sit at its foot, and in such a tense environment it could be argued that every single iota that could assist a club in avoiding the drop into the Blue Square Bet Premier – a division which is, let us not forget, considerably more difficult to escape from in an upwardly direction than it is to fall into in the first place, as a succession of former Football League clubs have found over the years – could be critical in preserving that all-important status amongst the “elite” – for the want of a better word – ninety-two clubs of English footbal. With this in mind, it is tempting to think that the newspaper reports linking Plymouth Argyle, who currently occupy one of these relegation places, to Ken Bates is little more than mischievous journalism. Plymouth Argyle Football Club has been through the mill over the last few seasons, collapsing from a place in the Championship into a lengthy administration which saw supporters protesting against not only the preferred bidder for the club at that time, Kevin Heaney (who was at the time of this a property developers and the owner of Blue Square Bet South club Truro City but is now bankrupt), but also the administrators, who seemingly inexplicably were only offering the club to Heaney as the suitor repeatedly failed to come up with the money to buy the club.

Considering what subsequently happened to Heaney (and, indeed, to Truro City, who ended up having their own near-death experience in the form of a period in administration and still sit hopelessly drift at the foot of their table on just sixteen points following their resultant ten point deduction), it might have been considered that Argyle dodged a bullet. In new owner James Brent, however, we saw a man with little previous noted interest in the game and who had described himself as a “reluctant bidder” at the time of the take-over, and the club’s current league position demonstrates that, while the financial future of the club may have been secured since Brent took over, its position on the pitch has scarcely improved. Such frustration for any support base which probably expected the nightmare of the last few years to end with Brent’s purchase of the club has been reasonably predictable, although the question of what sort of proportion of the club’s support might be dissatisfied with him and how dissatisfied they might be is not one that is easy to answer. Over the twenty-four hours or so, however, even the most implacably opposed to Brent’s running of the club since he purchased it might have been feeling conflicting emotions after a story appeared in the Mirror newspaper this morning which linked Ken Bates – yes, that Ken Bates – with purchasing Argyle at the end of this season.

Written in that curious form of English that only tabloid newspapers ever seem to use, the story is predictably short on detail. “Bates, 81, has told pals he wants a new club and views Plymouth, owned by James Brent, as a good prospect given their big potential fanbase,” they said, before going on to add that, “He now hopes the lowly Pilgrims avoid relegation to the Blue Square Bet Premier before making a move.” Setting aside any mild disbelief that Ken Bates could have “pals”, the article does carry a couple of interesting details. Much is made of “potential” at football clubs, and there can be little question that the catchment area for Plymouth Argyle could sustain football at a considerably higher level than dourly scrapping to avoid relegation from the Football League. There can be little question, however, that Bates’ motives are primarily financially motivated, and that this is what marks the club out as “a good prospect.” Plymouth supporters, however, may already be aware of the extent to which Bates shunted ticket prices through the roof during his time at Elland Road whilst selling many of the club’s best players and not investing in the team. What is “a good prospect” for Ken Bates might not necessarily be “a good prospect” for supporters of the club.

Then, of course, there is Bates’ famously prickly relationship with supporters who have the temerity to have an opinion on the way he is running his plaything du jour, as well as the media. The Leeds United Supporters Trust were subjected to considerable abuse from Bates, and the chair of the Trust was subjected to a hatchet job in the Daily Mail which hid behind the frankly cowardly defence of “public interest” when challenged and was widely suspected – although this, due to the source for the story choosing to remain predictably “anonymous,” was never proved – to be related to Bates or the senior management of Leeds United in some way, while the journalists of the Guardian were banned from Elland Road following a series of articles critical of their ownership by David Conn. This, of course, came from a man who used the Leeds United match day programme to publish a series of derogatory articles about a former director of the club, Melvyn Levi, which ended in a libel case which Bates lost. Supporters that have protested before and may well be geared up for doing so again, may well note such episodes in Bates’ recent past with dismay.

The Plymouth Argyle club president, Chris Webb, took to Twitter today to dismiss the reports as “typical lazy tabloid page filler.” Let us hope that he is right, but there is also further hope for Plymouth Argyle supporters hoping that this is little more than scurrilous rumour. There is, after all, the fact that this story remains unattributed, and perhaps should not be considered as more than idle tittle-tattle until it is further substantiated, but only those with he stoniest of hearts could not feel sympathy for a group of supporters that have had to tolerate Peter Ridsdale and Kevin Heaney in their recent past and now have the spectre of Ken Bates lingering, however obliquely, on their horizon. We had hoped that the end of his involvement with Leeds United might have finally marked the end of his time in professional football. This may, it seems, have been a little premature and if he doesn’t pitch up at Home Park, then it may well be somewhere else. It’s not a thought which gladdens the heart as this season draws to its conclusion. 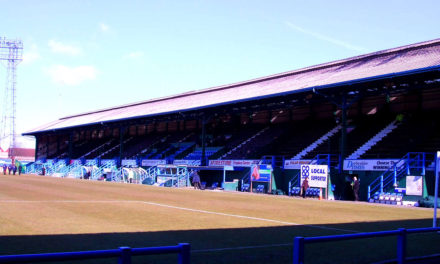 We Deserve The FA Cup That We Get