Modern football nationality is complex. And the World Cup brought many of those complexities to the fore.

Switzerland’s Granit Xhaka and Xherdan Shaqiri irritated Serbians with the Kosovo-Albanian celebration of their goals AGAINST Serbia. ‘Anyone-but-England-ers,’ got a booting, as non-English Brits dared to not want England to win the World Cup. And the issue has made post-tournament waves.

Germany’s Mesut Ozil and Ilkay Gündoğan, both of Turkish descent, posed for photos with Turkey’s authoritarian president Recep Tayyip Erdogan during Erdogan’s UK visit in May. Stories emerged of resultant unrest in Germany’s World Cup camp. And Ozil was scapegoated for their disastrous campaign. He responded last Monday with a 2,300-word announcement of his international football retirement.

A week earlier, Trevor Noah, the South African-born host of US late-night comedy news programme ‘The Daily Show’, got a snotty letter from France’s US ambassador, Gerard Araud, for his jokey suggestion that “Africa won the World Cup.” Noah responded with an eight-minute ‘between-the-scenes’ address to his ‘Daily Show’ studio audience (it couldn’t happen during the show…eight-plus minutes of US telly without ads? Pah!).

Players have represented two nations throughout international football history, for reasons ranging from geopolitical necessity to naked opportunism. However, the current issue was described best by Ozil in his three-tweet retirement statement: “I have two hearts. One German and one Turkish.”

Citing his mother’s teachings to “be respectful” and “never forget where I came from,” he claimed his Erdogan photo-shoot “wasn’t about politics or an endorsement of any policies. Not meeting the President would have been disrespecting my ancestors.” After all, “having respect for political office is a view that I’m sure the Queen and Prime Minister Theresa May shared when they hosted Erdogan.”

He lambasted “certain” German media outlets for “repeatedly blaming my dual-heritage and a simple picture for a bad World Cup on behalf of an entire squad. They didn’t criticise my performances (or) the team’s performances, just my Turkish ancestry and respect for my upbringing. This crosses a personal line that should never be crossed.” And he grabbed headlines by declaring “I am German when we win, but I am an immigrant when we lose.”

This concept sounded familiar. My father, in the early-1970s, often spoke of Northern Ireland boxer Danny McAlinden, the then-British and Commonwealth heavyweight champion. Dad claimed that during one fight, the commentator called McAlinden “the British champion” when he was ‘winning,’ but “the Irishman” when he wasn’t.

In 2011, tennis star Andy Murray was asked: “Are you British or Scottish?” and replied, with great deadpan comic-timing: “Depends whether I win or not.” This idea was later dismissed by a (Scottish) university linguistics study of ten years of UK press reports of Murray’s Wimbledon matches. Yes, someone did that. And the encounter was only a (fabulous) Comic Relief sketch.

For Ozil, the distinction was all-too-serious. He noted that former German captain Lothar Matthaus “received almost no media criticism.” for meeting Vladimir Putin at the Kremlin during the World Cup, where Russia’s autocratic leader hosted eight world football ‘legends’ in an obvious PR-exercise.

Yet Ozil was excluded from a charity-PR event at “my former school in Gelsenkirchen.” Just “days” beforehand, the school said “they no longer wanted me to be there, as they ‘feared the media’…especially with the ‘right-wing party in Gelsenkirchen on the rise.’” Unsurprisingly, Ozil was “really hurt” by being “made to feel unwanted and unworthy of their time.”

But “arguably the issue that has frustrated me the most over the past couple of months” was the “mistreatment from the DFB,” (Germany’s FA) “and in particular the DFB President Reinhard Grindel.” Ozil contrasted Grindel with Germany’s national President, Frank-Walter Steinmeier: “Unlike Grindel, President Steinmeier was professional and actually was interested in what I had to say about my family, my heritage and my decisions.” Whereas Grindel was “far more interested in speaking about his own political views and belittling my opinion.”

Ozil further noted that since the World Cup, “Grindel has come under much pressure regarding his decisions before the tournament, and rightly so. Recently, he has publicly said I should once again explain my actions and puts me at fault for the poor team results in Russia. I will no longer stand for being a scapegoat for his incompetence and inability to do his job properly.”

He asked if there were “criteria for being fully German that I do not fit? My friends Lukas Podolski and Miroslav Klose are never referred to as German-Polish, so why am I German-Turkish? Is it because it is Turkey? Is it because I’m a Muslim?” And after that question stopped reverberating, he added: “Being referred to as German-Turkish is already distinguishing people who have family from more than one country. I was born and educated in Germany. Why don’t people accept that I am German?

“I was called by Bernd Holzhauer (a German politician) a ‘goat-f*ker,’ Werner Steer (Chief of German Theatre) told me to “piss off to Anatolia.’ They are no better than the German fan who told me: ‘Ozil, f**k off you Turkish s**t, piss off you Turkish pig.’”

He was “disappointed but not surprised” by Grindel, as “in 2004 whilst you were a member of Parliament, you claimed that “multiculturalism is a myth [and] a lifelong lie…(and) that Islamic culture has become too ingrained in many German cities. This is unforgivable and unforgettable.” And “the treatment I have received from the DFB and many others makes me no longer want to wear the German national team shirt.”

So, “with a heavy heart and after much consideration,” Ozil decided ”that because of recent events I will no longer be playing for Germany at international level whilst I have this feeling of racism and disrespect.” That suggested Ozil’s retirement wasn’t final. But much must change for the 29-year-old to return.

Noah’s African World Cup victory claim was clearly frivolous to those who “watched with great attention,” as Ambassador Araud claimed he had. But if so, he would have heard Noah note that “when Paul Simon wins a Grammy,” black people “are like ’yes, we’ll take that too, thank you very much.’”

Noah, who attended the World Cup, also explained that “France is Africans’ back-up team. Once Senegal and Nigeria got knocked out, that’s who we root for,” which overlooked non-black African finalists, Egypt Morocco and Tunisia. He also provocatively observed that France’s black African players didn’t “get that tan by hanging out in the South of France.”

Araud’s incomplete recall of Noah’s words jarred with his annoyingly complete reference to “the 2018 Fifa World Cup RussiaTM.” And Araud insisted that “nothing could be less true” than France’s victory being African. It was French ONLY, partly because “all but two” of the squad (I know, I know) “were born in France.”

“They are proud of their country, France,” he added, re-hammering home the point. Their “rich and various backgrounds” reflected “France’s diversity.” And “unlike the United States of America, France does not refer to its citizens based on their race, religion or origin. To us, there is no hyphenated identity, roots are an individual reality. By calling them an African team, it seems you are denying their Frenchness.”

So far, so boll*cks. Arnaud had a point, in that Noah’s ‘tan’ comment “even in jest, legitimises the ideology which claims whiteness as the only definition of being French.” But he puzzlingly added that “the identity of the French national team should not be defined by people that are not part of it.” Such as…him?

Noah was “shocked at how genuinely angry a lot of French people got,” which he hardly assuaged by reading Araud’s letter in a stereotypically-French accent. It could have been “less true,” than an ‘African victory,’ he quipped, if he’d “said they were Scandinavian.” And he opined that players’ backgrounds were “more a reflection of France’s colonialism” than diversity

He acknowledged Araud’s point about legitimising right-wing ideology, as “in France, a lot of Nazis” use African descent to “shit on their Frenchness. They go ‘you’re NOT French, you’re from Africa, go back to where you came from.’” But he “vehemently” disagreed that “you cannot be French and African at the same time.” He also lambasted French politicians for labelling “unsavoury” immigrants solely as “African” yet “when their children” win the World Cup “we should only refer to them as France.

“We saw it with that African man who climbed the building to rescue the baby,” (Malian Mamoudou Gassana). “He rescued the child and they gave him French citizenship. So, when he was on the ground, he was African and…as soon as he rescued the baby, he’s French? But if he dropped the baby? ‘The African dropped the baby.’”

Noah vowed to “continue to praise” black French players “for being African because I believe they are of Africa. Their parents are from Africa and they can be French at the same time. If French people say they cannot be both, then they have a problem and not me.”

Ozil’s statement has resonated far more. The photo-shoot was naïve/unwise. The Guardian’s Philip Oltermann labelled it a “PR coup for Erdoğan,” who was seeking presidential re-election. Germany has 1.2m inhabitants with Turkish election votes. The photos neatly side-stepped a campaign ban on German soil, though Erdogan would clearly have won anyway.

The DFB responded with stock gratitude for Ozil’s “outstanding performances” for Germany while “self-critically” acknowledging that they mishandled the photo issue. They emphasised their role in integrating Germany’s “many footballers with migrant backgrounds.” But their “wish to make no public comment” on Ozil’s specific gripes was undermined by their reference to “some statements that for us are incomprehensible in their tone and message.”

They regretted that “Özil, unlike Jerome Boateng, feels he wasn’t given enough protection when made the target of racist slogans” (google “Boateng Pocher blackface” for the unwisdom of citing Boateng). Meanwhile, Bayern Munich president Uli Hoeness said Ozil had been “sh*t for years” and was hiding “he and his sh*tty performances” behind the Erdogan issue.

Ozil’s statement, which possessed rare intellectual power for a footballer, may have an effect. On Wednesday, Grindel made more (i.e. some) effort to address Ozil’s issues, including “much regret” that the DFB’s questioning of the photo-shoot was “misused for racist slogans.”

Grindel added: “As president I should been unequivocally clear about something that is a given for me as a person and for us all as an association: any form of racial hostility will not be accepted or tolerated under any circumstances.”

Modern football nationality remains complex. And ‘football’ has never been great at complexities. But Ozil, and to a lesser extent Noah, have forced re-thinks, or thoughts at all, from some with narrow views on nationality. If that increases understanding/acceptance of modern national identity, in and beyond football, Ozil will, to quote Shakespeare’s Othello, have “done some service.”

The Morning After Coventry City’s Night Before 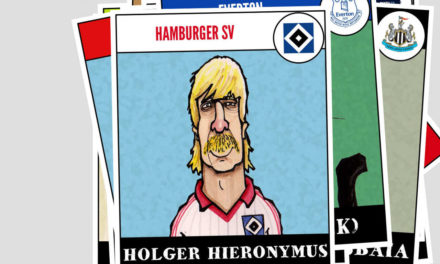