There’s a not unreasonable chance that you’ll have read a lot about the concept of “privilege” over the last year or so. Put briefly, in the context to which I refer, privilege might be considered to be the concept that certain people have greater advantages in life thrust upon them for no reason than their race, gender, or other descriptors that have little to do with their ability or lack thereof. Society, it is argued, grants privilege upon men on account of their sex, upon heterosexuals on account of their sexual orientation, and upon white people on account of their skill colour. It’s a much misunderstood subject – for example, the belief that this means that, for example, all white people have better lives than all black people – and its involvement in association football has been somewhat tangential, but over the last few weeks or so the subject has begun to encroach into the game on account of the language of some of the privileged of all.

It all began in Doha, of course, where at the end of last month Sam Allardyce spent rather longer than necessary – where “as long as necessary” equals “no time at all” – complaining to his depressingly but unsurprisingly sympathetic hosts Richard Keys and Andy Gray about the prejudice that he perceives against British coaches in English football. Allardyce claimed, between bites of gala pie, that British managers are perceived as “second class” and they they have “nowhere to go”. As his appreciative audience looked on solemnly, he claimed that “The Premier League is a foreign league in England”, as the sound of an imaginary Elgar piece swelled behind him. Sympathise with the poor, downtrodden British football manager, he implored.

Then November happened, and we all got to witness just what a load of empty, jingoistic, baseless bullshit was emanating from his pie-encrusted mouth. There have been three new managerial appointments in the Premier League, a number in itself which serves of a reminder of the jittery, hair-trigger times in which we live. First came West Ham United, who offloaded the decidedly Croatian Slaven Bilic with the very Scottish David Moyes. And then, right at the end of the month, came the big double-whammy. West Bromwich Albion replaced Tony Pulis with dancing like a drunken uncle at a wedding’s Alan Pardew. And then Everton, who fired the very Dutch Ronald Koeman so long ago that it started to feel as though they may have just forgotten to appoint a replacement, pulled out their masterstroke. The new Everton manager will be… Sam Allardyce, the poor, put upon soul who apparently no-one will hire.

When Allardyce quit the Crystal Palace job at the very end of last season, it was supposed to be for life. Indeed, his personal statement upon walking away from Selhurst Park stated that, “I have no ambitions to take another job”, that,  “I want to be able to savour life while I am still relatively young, and when I still relatively healthy enough to do all the things I want to do”,  and that “I simply want to be able to enjoy all the things you cannot really enjoy with the 24/7 demands of managing any football club, let alone one in the Premier League”. Sam Allardyce resigned his position on the 24th of May this year. We might assume, not unreasonably, that any Premier League chairmen looking to appoint a new manager this summer would have overlooked Allardyce when considering their options because he announced that he was effectively retiring at the end of last season. The first managerial sacking of this season came, ironically, at Crystal Palace on the 11th of September, so we might reasonably consider that Allardyce, at the absolute best, had “nowhere to go” for the sum total of seventy-nine days.

For Everton’s caretaker-manager David Unsworth, last night’s win against West Ham United provided a slightly surprising coda to his short spell in temporary charge of the club. Wayne Rooney scored a first Everton hat-trick – including, to seal it, a goal so delicious that under different circumstances it might have stood a chance, had it applied to be the European City of Culture – and Allardyce will arrive at Goodison Park in the next couple of days, presumably to single-handedly claim the credit for reviving a team of players plenty capable of ending this season in the top half of the Premier League should they end the season anywhere near the top end of the bottom half of the table.

His counterpoint last night, David Moyes, could certainly be forgiven for wondering when his privilege is going to show its face. The five years since his departure from Goodison Park to Old Trafford have not been kind to Moyes, and the overwhelming majority of evidence that we’ve seen from his handful of games in charge of his West Ham United team so far has only raised more questions than it answered. There is a – probably fair – argument to be made that three games is too soon to judge him. It is also perfectly clear that there is something rotten in the state of Stratford, and that the current smell of dry rot currently emanating from West Ham United can be smelt in the boardroom, amongst the players, and even in the stands, where a sense of alienation amongst the club’s support over the move to the London Stadium coupled with, well, this team only seems likely to grow and grow over the coming months. Whether Moyes turns out to be a symptom of the club’s malaise or the cause of greater ills to come, though, to be considered either after three matches is hardly a strong look for any manager.

The recent trifecta of second class men with nowhere to go was completed by confirmation that Alan Pardew will be the new manager of West Bromwich Albion. Pardew has been out of work since December last year, so perhaps he is the most put upon of the three, and any hopes that he would be arriving to find The Hawthorns in a particularly happy state were dealt something of a blow by Newcastle United coming from goals behind to snatch a draw there last night. Pardew is probably the most popular appointment of the three amongst supporters of their respective new clubs, though how much of this is as a result of a sense of relief at the end of a lengthy period of gruesome football (and recently gruesome results) at the hands of Tony Pulis.

This is Pardew’s fifth Premier League appointment. The Everton gig is Allardyce’s seventh in the same division. David Moyes has only had four jobs at Premier League clubs, though he has also coached in La Liga. When we consider such numbers, thoughts will inevitably turn to how and why these people keep getting appointed into positions in the first place. It certainly couldn’t be on the amount of silverware that they’ve accumulated over the course of a combined career that amounts to sixty-three years. Over the course of that time, Pardew, Allardyce and Moyes have won promotion from the second tier four times, from the third tier twice, and from the fourth tier once, one Football League Trophy, one Community Shield and one League of Ireland First Division title.

If anything, the sixteen appointments that they’ve had between them hint at club owners without a great sense of imagination and a near-paralysing fear of relegation from the Premier League. Whilst their figures in terms of trophies won isn’t spectacular, over those same sixty-three combined years they’ve only been relegated twice – Pardew in 2007 with Charlton Athletic and, of course, Moyes at the end of last season. Not bad for three managers over a combined period of more than six decades. And it’s in this final figure that we see something approaching what feels like the truth about the nature of modern managerial appointments and in turn the nature of modern football, particularly that the game is no longer about winning trophies. It’s about not losing money, and if that means the same old faces keep turning up time and time again, then so be it. The glass ceiling is real, but not in the way in which Sam Allardyce thinks it is. The glass ceiling keeps the same old faces on rotation to the detriment of others. It’s difficult to imagine a more precise example of “privilege” in action, and the fact that Sam Allardyce doesn’t seem able to see this as he waltzes into his seventh Premier League job and Everton supporters collectively hold their breath at the prospect of what the rest of the season might hold doesn’t make it any less real.

Podcast 231: Strength in Depth – A History of Non-League Football, Part 9 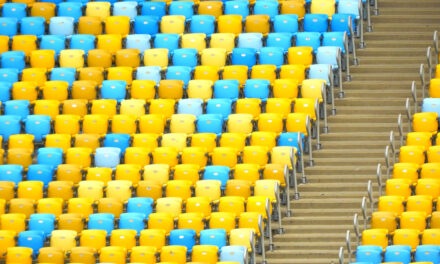 The Steps & The Tiers