As Aston Villa sneaked past Crystal Palace in the Premier League on Tuesday night, a couple of fleeting thoughts may have passed through the minds of the club’s supporters, thoughts that they haven’t allowed themselves to think very often over the last few months or so. Are the plans of new manger Remi Garde finally starting to bear some fruit? Whisper it quietly, but might Aston Villa be able to upset all odds and somehow clamber their way to another season of Premier League football after all?

Going into Tuesday night’s match, there were few signs that something as unlikely as three points and a clean sheet could possibly be on the cards for the supporters of this most beleaguered of clubs. The club hadn’t won in the league since last August, with the appointment of Garde as a replacement to Tim Sherwood having made no apparent difference to the team’s fortunes on the pitch, whilst the team’s last league match ended in a three-one defeat at Sunderland had an air of finality about it, as if a failure to pick up anything from a match they surely needed to take something from was the final confirmation that relegation was now little more than a matter of time.

Last week’s exploits in the FA Cup only added to the sense that where it is possible for something to go wrong for this club this season, it will do. A trip to moderate League Two opposition in the Third Round of this competition should not, under any circumstances, cause any major issues for a Premier League football club in the twenty-first century. The financial gulf between the top twenty clubs and the rest is now so great that justifications for not winning these matches have all but dried up.

The best that can be said for Sunday afternoon’s trip to Wycombe Wanderers is that they didn’t lose the match itself. On the pitch, however, the colour drained from the faces of the players after Wycombe pulled level from the penalty spot and an unwelcome replay was the final result. Somewhere around the perimeter of the pitch, however, things were going much, much worse for Aston Villa – or, more specifically, for the already fractious relationship between the club’s players and its supporters.

It wasn’t a dispute that could be kept under wraps for long, considering the heated conversation between Micah Richards and some supporters behind the goal at the match. The allegation made might not have been one that meant very much to the players of Aston Villa, but it certainly meant a lot to the club’s supporters. It centred around two players, Brad Guzan and Joleon Lescott, and concerned the behaviour of those two players during the match. In the words of one supporter, talking to the Vital Aston Villa website:

We were sat behind the dug out. I watched Guzan and Lescott laughing and fooling around throughout the match. It was a see through dug out. Towards the end I could not stop myself from approaching one of the fans who was showing his anger towards the bench. He told me they were seeing who could spit their chewing gum nearest to the touchline.

The guy next to me with the beard knocked on the dugout, they both turned round, we said they were disgraceful and obviously didn’t care. With that Guzan told him to f**k off, I knocked the dug out Lescott, told him he is supposed to be Villa to which he replied I am, he turned away, I knocked the dug out again and said why are you not acting like one with which he said f**k off. When Micah came round to us he placated the situation and understood our frustrations. I may look aggressive in the papers but was angry more than anything. It’s breaking my heart what is happening at our great club.

Not very becoming behaviour, considering the paucity of performance that so many Aston Villa players have demonstrated this season. Manager Remi Garde, parachuted into this chaotic situation with, it has rather started to feel, very little idea of just how bad the situation at the club was set to become, stated that, “I understand completely the fans’ frustration. I am not surprised because I know that from situations from different clubs I have played and worked for,” and that, “As a professional player, you need to behave in the right way with respect for everybody. It doesn’t matter if you are top of the table or bottom. It’s just a question of being respectful to everybody.” Meanwhile, Chief Executive Tom Fox had to fly out to New York for a crisis meeting with the club’s owner Randy Lerner on the subject of whether the damage done to the club of late might be repaired by using this month’s transfer window to bring in new players.

Today it was confirmed that Lerner himself will be stepping back from the running of the club with the appointment of Steve Hollis as the new chairman of the club, which remains up for sale, as it has been for some time now. What appreciable difference this might make to the club is very much open to question. The closure of the January transfer window – the last chance to breathe some fresh life into a moribund playing squad – is less than three weeks away, and the club is still adrift at the bottom of the Premier League.

Even a stopped clock tells the right time twice a day, though, and at Villa Park on Tuesday night the team scrambled over the finishing line in first place for the second time this season. It had been a somewhat remarkable one hundred and fifty-seven days since the team last won a match, but against a Crystal Palace team that has taken on a habit of blowing hot and cold over the course of the last few weeks or so and with the assistance of a fairly horrendous error from the Palace goalkeeper Wayne Hennessey, they managed it on Tuesday night.

And for all the uncertainty, all the rancour and all the disrepair, somehow this win gives Aston Villa just a chink of light. It would be, surely, one of the the most unlikely recovery stories in the history of English football were they to manage to avoid relegation at the end of this season, but the team is now seven points behind the two other teams that currently occupy the relegation places and only eight points from the dotted line the difference between Premier League and Championship football next season. It remains unlikely based on the evidence of our own eyes over the course of almost the entire season from the second game until Crystal Palace arrived last night, but there remains just a sliver of light at the end of the Villa Park tunnel for the time being, at least. 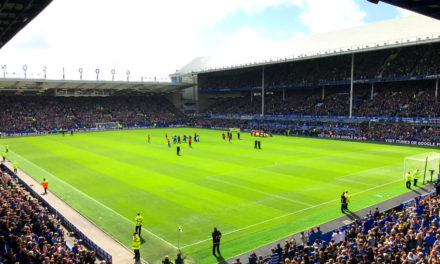