Leeds United: The “Manager-Eater” Takes Pole Position… Or Does He?

So the ongoing saga of the take-over of Leeds United has taken another few twists and turns this week, and now nobody on the outside of the matter seems to have the first clue what, exactly, is going on at Elland Road. It had been widely expected that a purchase of the club by the Sport Capital group, fronted by the millionaire Andy Flowers and the current club’s managing director David Haigh would be done and dusted by now. Since the end of November, it had seemed as if their takeover of the club was all but a done deal. Over the last few days, however, this deal has spectacularly come apart at the seams, with a character waiting in the wings who, in spite of his huge personal wealth, has filled many of the club’s supporters with a degree of apprehension.

Massimo Cellino is, for the time being at least, the owner of the Italian club Cagliari, and it is perhaps unsurprising that the early reports regarding his interest in Leeds United largely focussed upon his activities as the owner of that club. Cellino has become known as a ‘mangiaallenatori’ in Italy, which translates as a ‘manager eater’, on account of his apparent lack of patience when dealing with the individuals charged with running the playing side of his team for him. Since he took ownership of the club twenty years ago, a total of thirty-six coaches have been shown the door at Cagliari, not a figure that will inspire confidence amongst supporters who hope  that a change of ownership might lead to a period of stability at a club that has been in a state of flux for more than ten years, now.

While the appeal of such a headline figure to newspapers is obvious, though, this only tells one part of the story of Massimo Cellino, and there is a far larger partof his story which raises considerable questions over his fitness to be the custodian of a football club. In February of last year, Cellino and the mayor of Cuartu Sant’Aleni, a city near Cagliari on Sardinian, Mauro Contini, were arrested and imprisoned on suspicion of attempted embezzlement and false representation relating to the development of the Is Arena, a stadium to which Cagliari had briefly moved in 2012 after a dispute with the council over the use of their previous home. However, their stay there was brief and unhappy. A match against Roma had to be postponed, whilst another against Juventus was switched Parma and a match against Milan saw the stadium initially not granted a safety certificate before the club appealed this decision and won.

It has been suggested that the charges brought against Cellino and Contini have been politically motivated, and they haven’t yet come to trial, but there’s more to Cellino’s chequered past than this. In 1996, Cellino was held in custody for eight days and later convicted of deceiving the EU and the Italian Ministry for Agriculture out of £7.5million. After plea-bargaining, he received a reduced and suspended fourteen month prison sentence. And five years after that, in 2001, he received a further a fifteen month suspended prison sentence for false accounting at Cagliari Calcio. He’s knocked at the door of owning a football club in England before, too. In 2010, he was closely linked with buying West Ham United, and shortly afterwards was rumoured to have been in advanced talks over the purchase of Crystal Palace. Neither bid, however, came to fruition.

What, however, of the Sport Capital bid? How did that come to fail when it had been widely anticipated that this was a done deal? had agreed the terms of a buy-out with GFH on November 30 and it seems that the consortium had expected the deal to go through in time for funds to be made available for manager Brian McDermott in time to strengthen the team during the January transfer window. However, after undertaking due diligence Sport Capital revised its offer for a seventy-five per cent shareholing in the club ina downward direction and negotiations between the consortium and the club’s owners GFH Capital have subsequently broken down, with Flowers reportedly furious at what he described as a “breach of covenant” on the part of the owners in holding talks with Cellino over the last few days. His statement read as follows:

We are convinced this will not be in the interests of the club, the manager, the players or the fans. We must ask the question whether the prospective preferred bidder understands anything about the culture of Leeds United, its fans, its heritage or British football. We were fully justified in revising our bid because a number of things have come to light which were not as originally described.

This, of course, was always likely to mean a retort from the club of some description, and one followed this evening which told supporters almost precisely nothing about what is actually going on with regard to takeover talks:

Following recent media speculation, GFH Capital can confirm that we are in continual discussions regarding the introduction of new investment into Leeds United Football Club. Since acquiring ownership of the club in December 2012, we have supported the club financially, supported the manager, and worked hard to forge closer links with both the fans and the local community.

We have never made any secret about the fact that our aim has always been to attract investment partners, and we are currently speaking to a number of parties regarding the acquisition of shares. We would ask fans to ignore the media speculation surrounding investment, and be assured that we remain as committed as ever to the club and ensuring any new investment is in the best interests of Leeds United, for now and the future. We’d like to thank our fans for their wonderful support and for their patience, and we will endeavour to keep you updated.

So, in other words, GFH don’t think that they are the bad guys, they’re not saying anything about who these “investment partners” might be, supporters of the club should definitely not take any notice of anybody in the media who might say something mean about them – indeed, the reference to “media speculation” may well be aimed at the Yorkshire Evening Post newspaper, whose excellent coverage of this unravelling takeover has become increasingly critical as time has passed – and, oh yes, please, whatever supporters do, they definitely shouldn’t start getting so annoyed that they start thinking twice about bothering turn out at Elland Road whilst either this pantomime continues or the interloper from Sardinia does take control of the club.

The latter part of the club’s statement this evening is particularly interesting, particularly in light of the widely-reported suggestion that GFH Capital has been struggling to keep up with the club’s day-to-day overheads since it took ownership of the club. As of January 2013, the club’s debt – as evinced by a lengthy analysis of the club’s financial condition carried out by the Leeds United Supporters Trust in the latter part of 2012 – stood at £19.4m, and it has been suggested that this has risen to around £25m since then. Moreover, it was reported by the Yorkshire Evening Post at the start of January that £6m has been put into the club by the consortium headed by Flowers and Haigh.

This, it might be argued, gives them a degree of control over the destiny of the club. It has been rumoured, for example, that Flowers could issue a winding up petition against the club to recover the money owed to him, but the motive to do so would hardly be likely to be a sudden hatred of Leeds United AFC. A winding up petition would certainly force the club to take some sort of action. They could sell to Cellino, but that wouldn’t resolve the matter of Sport Capital getting paid their money. To put it another way, because of the money that they have already invested in the club and if we assume that there is still a chance that the consortium’s takeover could yet have life breathed into it, Cellino’s base figure to have to work from would have to be £6m higher than Sport Capital’s.

The alternative under such circumstances would be for the club to be placed into administration. GFH Capital could do this, of course, but then its future would be taken out of its hands, to a point. Were Sport Capital to do this, the consortium would get to choose the administrator as well. What would happen in the event of administration? There would be two obvious liekly outcomes. The first would be the club being put back up for sale again, only this time by an insolvency practitioner, and the second would be to agree another CVA, but one that would, presuming the £25m debt figure to be correct, make the 25% of votes required to block a CVA an interesting proposition, although what might happen at that stage would come down to who, exactly, was owed what by the club.

This, however, is mere conjecture and counts for little at this point in time. Friday is the last day of the January transfer window, and within twenty-four hours we will havea good idea of whether any of the club’s saleable playing assets – the coveted Scotland international forward Ross McCormack, for example – has been sacrificed to keep the meter ticking over for a few more weeks or months. And the truly sad thing about this is that a month ago, it looked as if the club might finally get itself into a position to be able push itself back towards the Premier League after a decade away. At this moment in time, however, no-one knows exactly what might be playing Leeds United. Normal service, many might feel, seems to have resumed.

Is This How Bolton Wanderers Die?

Ken Bates Loses The Closest Thing He Ever Had To ‘Honour’ 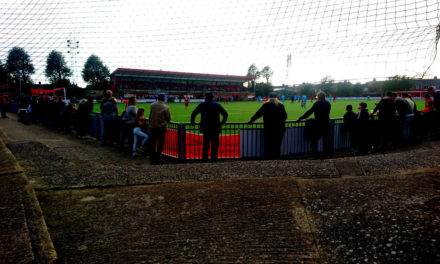