It wasn’t supposed to be like this, of course. The coming together of Manchester United and Jose Mourinho always had the feel of a Faustian pact about it. All connected with the club have long made considerable currency of “the United way”, the fundamental belief that this club should not just win but win with style, but the truth of the matter is that this was always likely to be compromised by a manager whose previous history had entirely been built upon the accumulation of results and trophies to the detriment of any other considerations, up to and including aesthetics.

That, however, was the deal. At the time of his appointment at the club at the very start of the summer of 2016, Manchester United had gone three seasons without a trophy of the stature that this club’s vast support expects and, whilst mild insouciance at having a fallow period is easy when you’ve spent the previous two decades sweeping all before you, impatience over Louis Van Gaal reached a crescendo to such an extent that there was little complaint even when his departure from Old Trafford was treated as shabbily as it was in the immediate slipstream of his ending that brief hiatus from medal accumulation with an FA Cup win.

Last season ended with silverware but few plaudits. Winning the League Cup was an irrelevance to supporters who recall winning the Champions League in 1999 and 2007, whilst winning the Europa League was an achievement in its own right, in a broader context it was considered by many to be little more than papering over the cracks of failing to automatically qualify for the Champions League. Last season might have ended with Manchester United lifting two trophies, but the Premier League was the key stepping stone to a sense that things had dramatically improved and that saw little improvement upon what had been delivered by Van Gaal or even his predecessor, David Moyes.

This season has finally seen the arrival of that long-awaited upturn in Premier League form. Were it not for the imperious nature of Manchester City’s football over the first half of the season, Mourinho would probably be sitting atop the table as 2017 melts into 2017 and all would be right with the world. The problem with this, of course, is that they’re not sitting at the top of the table and that it’s those pesky noisy neighbours who are picking up the critical acclaim and probably unassailable lead at the top of the league table that United supporters might well consider to be their birthright.

Christmas has not proved to be a particularly happy time for Manchester United either. On Saturday, a draw at Leicester City in front of the live television cameras felt like two points dropped rather than one gained, and yesterday afternoon they stuttered and stumbled their way to a home draw against Burnley. And that point about these results being two dropped rather than one gained is significant. Manchester City just keep winning, and winning, and winning. United are having to sprint like Usain Bolt just to remain static at the moment, and the question of whether it’s reasonable for all concerned to feel frustrated at this doesn’t make any difference to they do or not.

After yesterday’s match, Mourinho was back to being the sourpuss with whom we are so familiar when results don’t go his way. It has long be pre-supposed that he makes his “outrageous” post-match comments as an act of self-preservation and in protection of his players through deflecting attention away from their shortcomings over the course of the previous hour and a half. Sometimes they sound so absurd that their isn’t really a rational way of interpreting them any differently. This morning’s newspaper headlines were driven by Mourinho’s comments that “£300m is not enough” for Manchester United to compete with Manchester City at the top of the table.

We live in an age during which self-awareness seems to be diminishing on an almost daily basis. One can only wonder whether Jose Mourinho has any idea whatsoever what he sounds like when he claims that one of the most financially privileged football clubs on the entire planet, one which broke the world record for a transfer fee almost as soon as he arrived at Old Trafford, isn’t spending “enough” money on new players. Defeat at home to Manchester City in a match that was already being identified as a last opportunity to rein in some of Manchester City’s huge lead at the top of the table? Blame the opposition for celebrating too much. Knocked out of the League Cup by Football League opposition? Call them lucky.

The other expedient argument to put forward is that Manchester City have been “throwing money” at players, and that competing against them is all but impossible. But this only tells a part of the story of how City have arrived at the juncture at which they have this season. There is a lot to say about the way in which the owners of the club came by their money and of the financial imbalance that the arrival of money from the Middle East has brought to football across the entirety of Europe. But few would even attempt to argue that Manchester United, of all clubs, would argue against financial imbalance. They have, after all, been one of English football’s greatest beneficiaries of the opportunities afforded by the explosion in the value of television rights and commercial contracts that came about with the formation of the Premier League.

This criticism is more about the way in which money has been spent. Manchester City have rebuilt from the ground up, with what has increasingly become clear as a plan to position itself as one of European football’s super-clubs. Manchester United, on the other hand, have occasionally thrown vast amounts of money at the transfer market, but otherwise the investment has simply not come to pass. There has been persistent talk over the last ten years that Old Trafford is due renovation and the old place has been criticised in the past as being a little tatty around the edges, but nothing concrete has happened yet. The club doesn’t even operate a women’s team, whilst it has been claimed that the club’s academy is now an “underfunded afterthought” and that the club “continues to trade on past glories” in terms of its youth development.

None of this is Mourinho’s fault, of course, but it is striking that he doesn’t offer a great deal of substance to his press conferences other than to talk of the present and the immediate future. His solutions speak to more of the same short-termism. Throw even more money onto an infinite bonfire of players wages, agents cuts and transfer fees. There comes a point at which the buck has to stop with him, and he has the built-in excuse that it seems highly unlikely that anybody will be able to live with the likely champions this season. A decent run in the Champions League or a win in the FA Cup would provide some degree of emollient, but football’s landscape and the requirements to be successful have changed dramatically over the last five or ten years, and Manchester United have not kept pace.

That ultimately rests with those running the club, and it could be argued that the appointment of a short-termist like Mourinho is a symptom rather than a cause of the club’s ongoing post-Ferguson struggle to find itself a fresh identity. There is every possibility that Manchester City will remain unassailable until such a point that Pep Guardiola decides that he needs another challenge. It might make more sense for Manchester United to use this indeterminate period of time to prepare for being able to challenge again, to invest heavily in the club’s academy, to bring Old Trafford into the twenty-first century, and the feed through an entire coaching staff that can challenge at the very top end of the European game.

With the Glazers in charge of running the show and Mourinho as focused on quick fixes as ever, though, there doesn’t seem to be any institutional will whatsoever ever for Manchester United to change in a substantial success, and herein rests the question that will come to determine the medium-term future for the club: above and beyond occasionally chucking money at the transfer market, what’s the plan? Because blaming others for being too good, too lucky or having too much money can only buy a manager so much time. Losing at home to Manchester City a couple of weeks or so seems to have knocked the Christmas stuffing out of Manchester United, and when the manager with no sense of the long-term is suffering in the short-term as well, one can only wonder what is the point of him even being there in the first place. 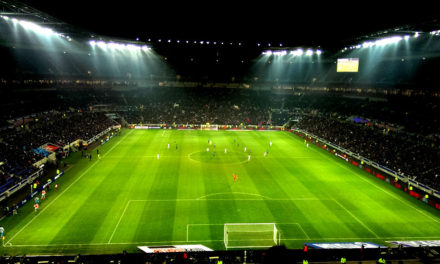 AFCON 2017: The Group Stages, Round Three