When it came to Britain’s entry into the world of home computing, the first generation of games may well have been skewed towards the strategical and the adult, but the influence of the arcades was also there from the very beginning. Clive Sinclair’s vision for the ZX Spectrum, which was released in 1982, might have been that this computer would be a serious machine to serious jobs, but this arguably noble aim was always likely to be undercut by market forces. Early ZX Specrum games were serious in nature. Flight simulators, chess and other boardgames. But by the end of 1982 third party software development companies were already springing up all over the place, and the pester power of the teenager would prove to be one of the driving forces behind the Spectrum’s huge sales throughout the decade.

But first of all, a quick recap. At the birth of the video games revolution, consoles had failed to quite get the hold in the UK that they had in the USA. There were also home computing communities in both countries, but the British market leant very heavily towards the home computer market. The introduction of the ZX Spectrum in the summer of 1982 had been a game-changer in terms of affordability – they started at £129.99 for the 16k version – and pretty soon the market was flooding with alternatives. The Commodore 64, with a bigger memory, far better sound, but also considerably more expensive, also landed in 1982. These two were followed into the market by the Amstrad CPC, which launched in 1984 and was partcularly popular in France.

At the more “educational” end of the market were the BBC Micro, which was actually released several months prior to the Spectrum in December 1981, but which had a price level high enough to deter many, and the Acorn Electron, a budget version of the same which sold well intially but failed to keep pace with the main market. There were also variants of Commodore machines, such as the VIC-20, the Commodore 16, the Commodore 128 and the Plus/4, and a whole heap of relative failures, such as the Jupiter Ace, the Dragon 32, or the Sinclair QL.

The game that would come to set the template for football games for much of the 1980s, however, came from Commodore. International Soccer was released by Commodore’s own games division in 1983, and has been described as the first great football game. Leaning heavily on Intellivision’s game of the same name (discussed in part one of this series), International Soccer set a high bar, by the standards of the time. The players moved quickly but smoothly around the pitch. It felt like playing football. Having been released by Commodore’s own game division, though, it remained out of reach for a growing Spectrum userbase.

The earliest attempts at football games are postscripts in the history of football video games. Titles such as Wintersoft’s Star Soccer were out from the beginning, written in BASIC and resembling board games such as Subbuteo or Striker as much as anything else. Better known was Arctic’s World Cup game of 1984, in which you play as post-apocalyptic zombie footballers, was a better known early attempt to play football in the style of the arcades, with its view snatched from International Soccer, but all of the charm of the original replaced by the harshness of faceless, black and white player sprites charging around on a harsh green background.

The breakthrough on the ZX Spectrum came in 1984, with the release of Ocean Software’s Match Day. Written by experienced programmer Jon Ritman, Match Day finally got some way towards creating a really football experience on the ZX Spectrum. It was slow – sometimes glacially slow – but it did have better options, the ability of change all names, and even to refine the colour of the pitch that you played on. Its follow up, Match Day 2, was released in 1987 and introduced an oscillating power bar, which meant that any attempts at shots or passes had to be timed accurately as well as positioned accurately. Both games were massive sellers.

The 1986 World Cup finals, however, became a cautionary tale in the history of officially licensed games. US Gold acquired the rights to the World Cup in 1985, giving the company a full year to get its game worked out. As time progressed, however, the project to write a game that would revolutionise football gaming on home computers became mired in problems, and as 1986 begun the company had to face an unpalatable truth – their game would be nowhere near ready for commercial release by the start of the tournament in June of that year.

Faced with the possibility of not having a game to release at all by the time of the tournament, US Gold resorted to an action that would go down in infamy within the gaming industry ever since. They licensed another, older game, threw it into a box with some assorted World Cup related tat, and released it anyway. The game that they chose to use was… the aforementioned Arctic Software’s World Cup Football. A “training mode” of penalty shoot-out and ball-juggling games (which bore no relevance to the actual game play and, as such, could hardly be described as a “training mode” at all) were tacked onto it, a few souvenir extras were thrown in, and the game was pushed out for sale at the – by the standards of the time – premium price of £9.95 under the name of World Cup Carnival.

The press reaction to the game was predictably derisory. Crash magazine, one leading publication for the reviewing of ZX Spectrum, gave the game a score of 26% and noted, “nice freebies, shame about the two year old recycled game”, whilst its sister publication for the Commodore 64, Zzap 64, reviewed the game with a score of just 11%, Your Sinclair magazine asked whether “Maybe US Gold should go in for the souvenir market full time”, and even the normally staid Sinclair User magazine described it as “mutton dressed as lamb”. There were reports that US Gold staff had been instructed not to speak to journalists or the public on the phone and magazines were flooded with letters of complaint from buyers.

Hints were there from the outset that there was a major problem with the game. To house all of the bits and pieces that World Cup Carnival came with, it came in a huge box, the size of a video cassette case, yet there were no screenshots from in game play on either the front or the back of the box and, if one looked very carefully at the cassette upon which the game was recorded, the big giveaway of all was written in black and white – “© 1984 US Gold”, the year of release of the original game. It sold a few copies, of course (officially licensed versions have always sold well and often regardless of their quality, which is no small part of the reason why the official licensing of video games has become such big business), but US Gold was attacked from all angles and its repution was permanently tarnished.

None of this, however, slowed the onslaught of licensed games that would follow, but licensing then was very different to now. In the early days, it was all about the individuals. The players, the managers, the squeaky-voiced panel show team captains. Gary Lineker, Peter Beardsley, Emlyn Hughes and Brian Clough were amongst those who their names to games, with the oddest probably being Peter Shilton’s Handball Maradona which, despite the none-more-1986 name, was really no more than… a goalkeeping simulator. There was no Official Football League game, and no Simod Cup Simulator. There was an official FA Cup game, but it playing it seemed to consist of little more than watching results come in on a computer-generated vidiprinter. Footballer Of The Year, on the other hand, took a completely different path and placed the player as a professional footballer embarking on a career.

By the time of the 1990 World Cup finals, though, the question of whether the official game on the ZX Spectrum was any good or notwas broadly an irrelelvance. (It wasn’t, by the way – it was an absolute dog’s breakfast.) Sinclair Research, Clive Sinclair’s company, had got into financial troubles at the height of the Spectrum’s success, which were the twin disasters of the QL, a business compuer, and the C5, the infamous electric tricycle. The Spectrum name and brand was sold to Amstrad in 1986, but they would only continue to produce slightly upgraded versions of it until 1992. The Commodore 64 followed in 1994, dying with the Commodore International company, which filed for bankruptcy in April of that year. It had been due to end production the following year.

For a few years, though, these games were a cauldron of experimentation, although economics ended up stifling innovation fairly quickly. Football gaming was about to take its truly great leap forward, as the technology required to be able to feed in the amount of data required for a truly immersive football experience became available for the first time. In the next episode of this series, though, we’re going to be stepping out of our bedrooms, getting a handful of loose change, and heading to the arcades, because football games at the arcades have evolved very differently indeed. Because football at the arcades had a very different set of priorities those produced for home consumption, and they forked in some very curious directions as a result. 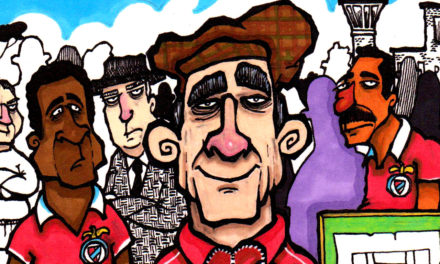