Horsham: At Home, And Away

A little under a quarter of a century ago, my sister moved to Horsham. She married a man, had two children, and has lived there happily ever since. A little over a decade later, with me having decamped at first to London, and then to Brighton, my parents joined her, moving to a house about a mile away from hers. I have a family of my own, now, living twenty miles away in Worthing, on the coast. Horsham, however, remains enigmatic to me. It’s the first town or city that we haven’t all called home, and even after more than a decade of visiting our still get mildly baffled by my own apparent lack of a sense of direction. On the coast, if you walk too far south, you end up with wet ankles. The internal monologue question of, “Is the sea in front of me, behind me, to my left or to my right?” can be an extremely useful one, when it comes to the prevention of getting lost.

Horsham Football Club have had a difficult last few years. Founded in 1871, they joined the Isthmian League upon its expansion to two divisions in 1973, getting promoted to its top division in 2006. Off the pitch, however, the seeds of a set of circumstances that still haunts the club to this day were being sewn. An FA Cup run during the 2007/08 season which saw them beat Maidenhead United of the Conference South and – inconceivably to 2016 eyes – take Swansea City, then of League One, to a replay raised the club’s profile, but this couldn’t prevent a state of affairs that might well have killed the club. Queen Street had been the club’s home since 1904, but the club sound the ground to property developers and moved out in 2008. The club had bought a social club called the Holbrook Club with a view to redeveloping the site to include a new stadium, but locals were unhappy and planning permission for a new ground there was rejected. Not only this, but the same fate befell an application at a time in Hop Oast, on the south side of the town. A third planning application has just been submitted, and will be heard this year.

The club ground-shared twenty miles away at Worthing for a year but since then have been ground-sharing a short distance from the site of their old ground at Goring Mead, the home of another local club, Horsham YMCA. YMCA spent much of the last decade bouncing between the Sussex County League and the Ryman League Division One South. The Sussex County League renamed itself as the Southern Combination Football League at the beginning of the 2015/16 season, and it’s first winners under it’s new name were… Horsham. The club’s eight year stay in the Ryman League Premier Division came to a crashing halt in 2012 when they were relegated with a dismal fourteen points, and three years later they dropped from the Isthmian League for the first time since joining it for the first time, forty-two years earlier. The club’s stay in the Souther Combination Football League, however, lasted just the one season. Promoted straight back as champions, this year they’re back in Division One South of the Ryman League, where they go into their Boxing Day fixture in a relatively modest lower mid-table position.

What Godalming Town would give for such mid-table anonymity. The club transferred from the Southern League to the Ryman League for the start of this season, and to describe it as something of a disaster veers into the territory of understatement. They go into the match six points adrift at the bottom of the table, but even this doesn’t really tell the story of just how bad things have been. They have just nine points from their twenty-five games, which have seen them concede seventy-five goals into the bargain. On top of this, shortly before Christmas they relieved themselves of their manager, which has probably only added to the impending sense of doom amongst their supporters. The club’s former development manager is in charge for this game, but at a level of the game at which bringing in new players can be a financial challenge at the best of times, how on earth will anybody be tempted to join a team that has been displaying many of the characteristics of a sinking ship?

Goring Mead is still not quite home to Horsham. There’s a table one side of the bar selling scarves, mugs and key rings, but the signage around the ground talks of “the YMCA” and the goalnets are red and white, whereas Horsham wear yellow and green. And there are more significant issues with Goring Mead than this, too. The ground is hemmed in by housing on three sides, to the extent that behind the goal by its entrance is a tarmaced car park, whilst the pitch feels crammed into a space that’s marginally too small for it, with huge nets in place to mitigate damage to the houses that overlook the ground. When the ball goes into the goal, it cracks out off the advertising hoardings around a perimeter fence that is no more than four yards from the goal line. And this, even in the event that Horsham were to arrange a permanent ground-share here and redevelop, is a big issue. Access for cars is challenging, and there’s almost no room to expand the ground at all. For a non-league club, having this sort of problem can mean the difference between promotion and being denied it. The question of “why can’t they just play at the YMCA?” is an appealing one, but there are good, solid reasons why the club should want a home of its own.

A two o’clock kick-off is an unusual time to start the match. Perhaps they’re trying to save a few coppers by not switching the floodlights on at Gorings Mead, but the slow descent of the sun in the sky coupled with a completely clear day makes viewing the match from some parts of the ground something of a challenge. And the slightly earlier than usual kick-off time doesn’t seem to Horsham. A mid-table season can make for a schizophrenic and febrile type of self-confidence. It takes twenty minutes of pot-shots from optimistic distances, pass and moves that have plenty of the former but perhaps too little of the latter, and even the occasional surprised looking Godalming break into their own half. A glanced header from Charlie Farmer after nineteen minutes and quite lovely curled shot from Tom Lawley a little over ten minutes later seem to kill the game, but three minutes after this Matthew Males pulls a goal back for Godalming from a position that looked sufficiently offside for the Horsham defence to briefly strike something akin to a mannequin challenge pose. At half-time, it felt as though we might yet have a game on our hands.

Of course, a major part of the non-league football experience cannot be summed up by dry match reports, valuable though they are. Behind the Godalming goal in the opening stages of the second half, the home supporters are becoming skittish, and none more so than the chap standing next to me. He has a jacket adorned with trinkets of varying sorts, two Horsham flags, an Arsenal rucksack and, most troublingly for my tinnitus-ridden ears, a klaxon. He asks me whether I think a fiver will be enough to persuade the visiting goalkeeper to throw in two, three or four goals, but my answer is curtailed when he picks up his klaxon in preparation for goal-kick. I dissuade him from sentencing me to life standing inside a clear plastic box like Pete Townshend has to when The Who play live, but it’s probably time for me to leave to stand in a different part of the ground for the remainder of the match.

As the evening continues to descend on Gorings Mead, Godalming wilt like sunflowers. Steve Metcalf adds a third goal eight minutes into the second half, but it’s only really as twilight arrives that their decline accelerates. Substitute Darren Boswell adds a fourth goal with fourteen minutes to play, but it’s with the arrival of another substitute, George Gaskin, that the floodgates really open. Has a footballer ever had a day like George Gaskin’s Boxing Day? Dual-registered with Southern Combination Football League side Littlehampton Town, Gaskin had already played in the morning, scoring a hat-trick for them in a four-one win away to Worthing United. Introduced with a quarter of an hour to play, he repeats the (hat) trick for Horsham, shooting in off the post with his first touch for his first, tapping the ball in at the far post with his second touch for his second, and then driving a first-time shot into the top corner to complete a most extraordinary day.

Even this achievement, though, comes close to being eclipsed in the very dying seconds of the game when George Branford brings the ball under control with his chest, flicks it over his own head and crashes the ball into the goal. Showboating in the nether regions of the Ryman League Division One South? On a day when a player can score hat-tricks within a fwe hours of each other, perhaps anything is possible. The full-time whistle blows a few seconds later. The home supporters make no secret of their desire to “all have a disco”, and this is hardly surprising. This is Horsham’s biggest league win in more than twelve years. It’s eradicated their negative goal difference and nudged them to eleventh place in the table. Fifteen points off the play-offs, much more than consolidation is probably beyond the club for this season, but it’s entirely possible that their biggest result of the season one way or the other may well come in the chambers of the local council, upon hearing what the club itself has described as a “third and final” planning application for a new ground of its own.

It’s difficult to see a way back for Godalming Town this season. They have just twenty matches of their season left to play and are already fifteen points adrift of safety. Where salvation comes from under the circumstances of the first half of their season is just about anybody’s guess. For Horsham, however, the play-off places remain mathematically possible and the team has received a not insignificant confidence boost ahead of two matches in three days, just either side of the New Year. Who knows? Maybe they will find themselves in contention for something more than a mid-table finish, with the right wind behind them. For now, going home might be enough, but that’s far from assured at the moment. At least, however, Horsham seem to have overcome the very worst of their recent problems.

There are a small number of photographs from yesterday’s match between Horsham and Godalming Town available here. You can support our work here on Twohundredpercent by subscribing with us through Patreon, right here.

Premier League Ticket Prices: Money For Nothing & Kicks For… 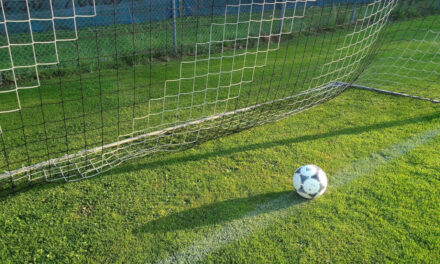