Farewell for now, then, George. At six o’clock this evening, the Football Association issued a statement confirming that George Rolls, the former chairman of Cambridge United and Weymouth, latterly of Kettering Town, had been found guilty of over 3,000 charges of their rules relating to betting, along with a small number of charges of “Misconduct relating to his conduct during the investigation of the alleged breaches of the Betting rules.” The punishment for his misdemeanors was strong, to say the least. Rolls has been banned from any involvement in football for five years, fined £10,000 and warned about his future conduct.

The charges related to betting irregularities between the years 2007-2010, when he was on the board of Cambridge United and also associated with Weymouth FC, although it should be pointed out that both of these clubs have already been advised by the FA that these charges were personal to Rolls and that their clubs would not face investigation regarding them. He has been left with no option but to leave Kettering Town with immediate effect and, with the FA having issued a thinly-veiled warning that this ban would include any influence, management and administration in football – which would seem to hint at concerns over the idea of him getting involved in some form of shadow directorship – it seems that his involvement in the game may actually have come to an end for now, though the FA may wish to keep an eye on any rumours of him getting involved at any clubs in the future. Rolls, meanwhile, was bullish on the subject in his statement on the matter earlier today:

I am flabbergasted and shocked at the decision. I believe thousands of participants are falling foul of the FA rules as they are not aware of them. I am sure many more people will fall unwittingly into the same trap as I have done and further charges may well be levied against individuals. My involvement as club chairman will have to cease with immediate effect for the next five years. But the hard work that has already been going on behind-the-scenes at Kettering Town – with strong leadership qualities from the new board alongside the new manager – will hopefully continue. This matter has never been a criminal investigation and I will not incur a criminal record because of it. I have merely fallen foul of FA rules [for] which I am very sorry.”

Of course, ignorance is no defence in terms of any aspect of the law and this applies just as much to that weird parallel universe of the football authorities and their rules and regulations. It also seems reasonable to say that Rolls doesn’t this evening seem to be on the receiving end of too much sympathy from the supporters of the club at which he was previously involved. It could also argued that, having been the chairman of Weymouth at the time of their CVA and the “acting chairman” of Kettering Town at the time of their pre-pack administration (a process by which the assets of a company immediately are sold after it has entered administration, often to the previous directors or management of that company, who set up a new company and usually leave unsecured creditors with next to nothing), he should have failed the FAs Fit & Proper Persons test regardless of todays events. The FA need to revise their rule-book in relation to pre-pack administrations as quickly as possible, and if they are looking for reasons why, they should perhaps look no further than these criticisms of them, from Dr Peter Walton, of Nottingham Trent University:

Meanwhile, Kettering Town FC itself had a statement on the subject to issue, which was sufficiently obsequious to cause some to wonder whether it might have been written by a member of the Rolls family (regular readers may also wish to roll their eyes at the now apparently obligatory use of the this centurys football crisis buzzwords, “sustainable” – from a club which, in going down the pre-pack administration route, stepped into territory so amoral that even the overwhelming majority of football clubs in desperate financial situations have not dipped their toes into it – and “community-focused” – from a club which moved eight miles away from its community a year ago):

The club would like to take this opportunity to thank George and his family for their support during a very difficult time in the clubs 140 year history. The club also acknowledges the stability and structure George brought to the club, without which the club may not have survived to see the start of this new season. The board will be meeting over the weekend, where the vote for the new chairman will be undertaken and announced. The board are committed to building on the structure put in place, to make Kettering Town FC self-sustainable and community focused.

The club also had a further announcement to make this evening, regarding rumours that have began to circulate again regarding a winding up petition that was due to be heard on Monday morning. This time – and yes, what is  below is it, in its entirety – their statement was a little shorter:

The Club would like to assure fans than the news of the winding up order is pre CVA action.

Well, that’s okay then, but it doesn’t mask that the good name of Kettering Town Football Club has been tarnished, probably beyond repair, by the actions of those running it over the last year or so. We shall have to wait to see who ends up running this club, and there can be little doubt that the only moral leadership left at this club can come from the supporters themselves, and it should, in theory at least, be this organisation which steps up to the plate and takes controls of a football club that has, over the last twelve months or so, become a discredited disaster zone. With the club now debt free, however, the likelihood of this happening is not necessarily great. Supporters trusts only seem to be entrusted with the running of clubs when unresolved financial crises lay either on the horizon or very much in the present. If there’s a dollar to be made at Kettering Town FC, someone will likely step in and try to make it. This, however, doesn’t mean that they should try. An unexpected opportunity has presented itself to the trust today, and it is one that they should attempt to seize. In its one hundred and fortieth year, Kettering Town could do with some moral guidance. It doesn’t seem to have had too much of it of late. 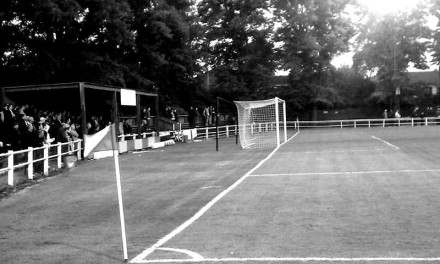 Podcast 295: This is our Everest, Part Forty-One – Splash!