Munster’s hurling championship was expected to provide May’s GAA fun and frolics. Ulster’s football championship (UFC) was not. And yet…

No-one would have pinpointed the ultra-local ‘derby,’ and Ulster championship quarter-final, Down v. Armagh, as the match of any weekend with ANY other games. But Pairc Esler in Newry, the Down GAA town straddling the Down/Armagh border, was the unlikely place to be on Sunday.

“Ulster will fight” could be the UFC’s 21st-ventury motto. ‘UFC’ couldn’t be a more appropriate acronym. And with referees instructed in midweek to ‘crackdown’ on high-tackling in football and hurling, BBC Northern Ireland match commentator Thomas Niblock’s stock phrases in Newry were almost inevitably “big hit,” “another high challenge, there” and “what colour will the card be?”

For Down’s Caolan Mooney, the colour was red, after a shoulder-charge in first-half stoppage-time  visibly knocked Armagh player Aidan Nugent’s head back (the shoulder-charge is allowed in Gaelic Football…but not to the chin). Down were only a point up at half-time. Yet the 14 men were still a point up 17 minutes later. Then keeper Rory Burns misplayed the ‘sweeper-keeper’ role and was ‘black-carded’ (effectively an enforced substitution) for hauling down the Armagh sub, Stefan Campbell, who’d dispossessed him, fifty (!) yards from goal.

Sub keeper Mark Hynes’ second act was picking the ball out of the net into which another Armagh sub, greying veteran Mark Shields, thumped it. And within three minutes of Burns’ departure, and with 15 minutes left, Armagh were five points ahead. “There’s only going to be one winner now,” BBC Radio Ulster pundit Conleth Gilligan opined, as Armagh were still five-up with three-and-a-bit minutes left. And few could argue. Armagh surely couldn’t lose.

They didn’t, ultimately. But they gave it a bloody good go. Their retreat into un-necessary defence poured the initiative and momentum onto Down. Donal O’Hare’s goal forced handbrake turns on the hundreds of Down fans leaving the ground. And young, yes, sub James Guinness hit the equalising point from miles out, with Armagh players furiously, and possibly correctly, signalling the shot wide.

Armagh wasted two good stoppage-time chances. Their frustration was evident in an on-field brawl instigated when Armagh manager Kieran McGeeney ‘accidentally’ shouldered Down’s Kevin McKernan after the full-time whistle. And Down, restored to 15 as extra-time is deemed a ‘new’ game, soon pulled three clear. But Armagh fought back and won the game again when starman Rian O’Neill pinged a high ball towards the Down goal where it was impossibly acrobatically punched into the net by Armagh, right again, sub Andrew Murnin.

O’Neill quickly grabbed a magnificent ‘insurance point,’ to give Armagh an ‘insurance’ of being two scores ahead. They needed it. Gaelic Football own goals are almost as rare as rocking-horse s**t, but Armagh conceded one. It was JUST too late, though, to allow for any more dramas.

Armagh will meet Cavan in the semi-final considered to be on the ‘weaker’ side of the draw, as two of Ulster’s modern ‘big three,’ Ulster champions Donegal and 2018’s All-Ireland runners-up Tyrone are on the other side. The third of the big triumvirate, Monaghan, brought an ageing team and an ageing strategy to Cavan’s Breffni Park, and paid the ultimate price.

Cavan employed a rare brand of football for Ulster, known technically as “good.” They were helped to an early six-point lead by some ‘Scottish’ refereeing; Monaghan being denied a clear penalty moments before Cavan were awarded one for nothing. But there was no doubting the merit of their eight-point half-time lead and ultimate four-point victory, as they staved off Monaghan’s second-half rage against the dying of their light, to avenge one-point home defeats to Monaghan in 2015 and 2017.

Overshadowed though it was for once, Munster hurling produced two outstanding, headline-grabbing team performances last weekend. Tipperary thrashed Waterford in Thurles. And Cork, comfortably beaten IN Cork by Tipp last week, comfortably won IN Limerick against the reigning All-Ireland champions. After a 2018 Munster Championship bereft of away wins, away teams can barely stop winning in 2019.

Waterford’s woes continued woefully. Eight points down and a man down after influential defender Conor Gleeson was sent-off for two quick yellow cards before half-time, they brought the deficit back to three points midway through the second half. And the game looked ready to approach last year’s recovery dramatics, when Tipp drew after being eleven points back. But then Jason Forde finished a terrific Tipp move to the net. And 14-man Waterford collapsed in 14 heaps, to lose by…ulp…EIGHTEEN.

Waterford finished fifth-out-of-five in Munster in 2018 and look likely to again in 2019. Last year, this was attributed to a lack of home games. And home defeat to Clare two weeks ago was attributed to their small Walsh Park home pitch not being suited to their style of hurling. It now seems that, good though they are, and wherever they lay their hat, Waterford are simply Munster’s fifth-best team just now. Which is no shame. Munster’s third-best team in 2018 ended up as All-Ireland champions.

And Munster’s best team in 2018 and 2017, Cork, could end up anywhere in 2019. Taken to task by the critics after being taken to the cleaners by Tipp, Cork were worth each-and-every-one of their seven-point winning margin against a Limerick team who were pucking their first championship balls since becoming All-Ireland champions…and at times looked like it, however you define ‘balls.’

That said, Cork’s second-half would have beaten anyone anywhere. And the game had a very pivotal 51st minute. Limerick nearly levelled when Cork back Mark Coleman and keeper Anthony Nash  fumbled balls near goal. But the danger passed, 17 seconds later, Cork’s Patrick Horgan capped his terrific afternoon with a terrific flick, turn and fire into the net to put Cork six points up, and the game was theirs. (“He’s got an eighth,” RTE commentator Ger Canning said earlier, referencing Horgan’s eighth point of the game, not any stash he may have used to reach such hurling heights. I assume).

Hurling’s match of the weekend, though (bar Roscommon’s terrific 10-point win in London in the third-tier ‘Christy Ring Cup’…he says without a hint of bias) was in Parnell Park, Dublin. Dublin’s recent record in Leinster hurling is one of lost leads and narrow defeats. And Sunday’s story against Wexford looked like the same old one. They were five points up with 15 minutes left, which, while ‘nothing in hurling,’ was a strong position as the sides were inseparable for 40 of the first 55 minutes. Then Liam Og McGovern and Rory O’Connor goals helped put Wexford three-up by stoppage-time. And THEN…

In Kilkenny eight days earlier, full-forward Liam Rushe twice barged into defenders who darkly noted penalties being given as they crashed to the turf. This week, Rushe was ‘fouled’ outside the area. But Sean Moran, as he did for Cuala in the 2018 All-Ireland club final, netted to snatch a draw, though his free was mishit and squirmed under keeper Mark Fanning and the SIX defenders he had for goal-line company. It was harsh on Fanning, who earlier made a wonder save to stop Dublin going six points clear. But the corollary of that is that defeat would have been harsh on Dublin.

Nonetheless, Leinster’s top three still look likely to be Wexford and Galway, who meet this Sunday, and Kilkenny, who won well in Carlow last Sunday. In the first half, it looked like Carlow were in the Leinster Championship because of a clerical error. Kilkenny hit the net in the first minute and were 15 points up at half-time. Thankfully, Carlow dragged their way back into plucky territory by ‘winning’ the second half by a point. And their home match with Dublin this Sunday could go either way.

But Ulster football is currently where it’s at. We live in interesting times.

Intrigued? Fascinated? Aroused? You can catch up with the Ulster Senior Football Championship on IPlayer. The 2019 GAA Championship is available on Sky Sports. 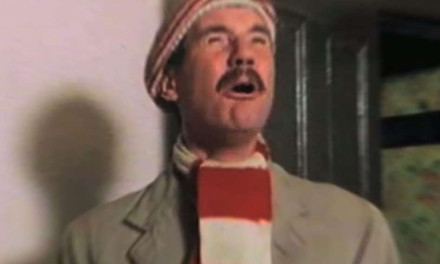