There is plenty of debate over the relative standard of the various British football leagues, usually focusing on whether the Scottish or Welsh top-flight is “Championship” or “League One” standard. After an evening in the company of the League of Ireland (LOI) last month, my internal debate was whether I’d been watching “Championship” or “National League” standard RUGBY.  Two days after my LOI experience, my cousin’s husband John, a keen football fan, likened a League Cup tie he’d seen to “ninety minutes of kicking for touch,” before declaring the LOI “not for me.” I knew exactly what he meant. If there was a pass to be over-hit, then the two teams I watched over-hit it. And for the first half-hour at least, the referee’s assistants were getting better service than any strikers on show.

John hadn’t named the teams he’d seen – largely to protect the innocent, I suspect. I won’t be so shy. Saint Patrick’s Athletic, from the West Dublin suburb of Inchicore, were hosting Athlone Town, from the very centre of Ireland. The LOI table half-explained the fare on offer, as Athlone were bottom of it – played nine, lost the lot. But St. Pats had no such excuse, as wins in their previous four games had taken them into the top three, in what one flag in a corner of the ground reminded me was their defence of the LOI title. A good job that flag was there, as the football offered little indication of 2013’s glory.

I was in Dublin for a long weekend, with the Gaelic Football team from my parents’ home county, Roscommon, playing in a biggish match in Croke Park (they won, thanks for asking). And in searching through the Friday night LOI fixture list, I was hoping to see either Shamrock Rovers or Bohemians at home. They were bigger names, with bigger grounds – Ireland used to play their home internationals at Bohs’ Dalymount Park and I positively fancied a trip there. There was Shelbourne too. But I’d already “done” their tiny Tolka Park ground, watching them dismantled by Spurs in a pre-season friendly.

As St Pats are reigning champions, my initial disappointment at discovering that the “big” two were away was, technically, misplaced. The latent groundhopper in me also provided feelings of consolation – it was a new ground and a new part of Dublin for me. Part of Athlone is in Roscommon, so I had a team to support if required – although Town were so bad, I was a neutral again minutes after kick-off.  And it was a pleasantly warm spring evening to make the mile and a bit walk from the city centre. So there was plenty to enjoy. And, eventually, I did enjoy the experience, as it contained all the good points of the non-league football game I follow regularly in England – even if the football on show was all-too-frequently comparable.

The journey to the ground was also comparable. Locals looked puzzled when I asked where the ground was. And there was no opportunity to “follow the crowd” as I approached where my Dublin map said the ground was, even though kick-off was twenty minutes away. In my defence, St Pats’ Richmond Park ground wasn’t easy to find even when I could hear the monotone of the tannoy announcer (another regular facet of the non-league experience) blowing in and out of earshot by the breeze.  Like the Bernabeu in Madrid – and that’s the last time you’ll read that comparison – Richmond Park is below street level. So my search for floodlights was at the wrong height altogether, me looking skyward while lights poked through the park’s trees at ankle height. And with Dublin being someway west of London but in the same time zone, the lights weren’t needed on a sunny late April evening until much before kick-off. But, eventually, I saw them, found a crowd to follow and found my way in with minutes to spare.

The LOI is a summer competition, hence Athlone having lost only nine games by the end of April, with full fixture cards on a number of Fridays. Such moves were designed to boost attendances – avoiding the direct weekend competition of English football on TV (Setanta Ireland show live EPL football at three pm on a Saturday) and Gaelic sports. Like the country itself, the league is undergoing considerable financial “re-adjustment” after over-spending wildly during the “Celtic Tiger” years. So whatever move could be made to boost attendances without cost has been made. But the idea of a trip halfway across a country – even one as small as Ireland – through a Friday rush hour has little superficial appeal. And it was little surprise that the “Friday Night Fever” emblazoned on one of the three impressively large Athlone flags behind one of the goals appeared to have laid low almost all their support.

Indeed, there were no supporters at all stood by the flags. And it took a while before the team did anything in the match to bring a noise from the merry midland few, which pinpointed them in a little knot in the corner of the main stand nearest the flags. Pats fans, meanwhile, were as “massed” as you could be in a crowd of 1,257, even one which looked a good few hundred more (and years of watching football at the level my team play has taught me to recognise such “gatherings”). They had flags too. And they knew how to wave them, in time to a drumbeat which rarely stopped all night – and not at all during the first half. The flags were a resplendent red and yellow – a little odd given the lack of yellow in the team’s kit, bar a couple of the boots on show. And they gave proceedings a carnival atmosphere which was more impressive for its incongruity alongside the football.

Athlone looked every inch the injury and suspension-hit strugglers they were. They were promoted to the LOI’s Premier Division as First Division Champions last season and simply haven’t, yet, bridged the gap in class, not helped by the post-season departure to Derry City of title-winning manager Roddy Collins. It wasn’t clear from the exchanges whether their number two, Conor McMahon, was a right-back or the right-sided defender in a back three. Either way, the overlap was not for him – he appeared to do a handbrake turn whenever he stepped on the halfway line. And the way he kept hold of his shirt cuffs reminded me of…me shivering on the wing at schoolboy rugby. His body language did NOT say “I really want to be here.” By contrast, centre-back Alan Byrne wanted to be everywhere. Unfortunately, he needed to be when Pats eventually got their game going. And that just wasn’t possible, even while showing an authority which explained why he was vice-captain despite being on-loan from Drogheda United. Little wonder he’s going bald at 30.

For much of the first-half, Pats looked anything but defending champions. Unlike Brazil, whose domestic league has enough money to bring native players back home for their club football, the League of Ireland has hosted few prodigal football sons. And one of the few returnees, ex-Birmingham midfielder Keith Fahey, didn’t stand out as much as his pedigree suggested he should, despite his early impact – a neat through-ball to James Chambers, who sprang what passed for Town’s offside trap and slotted the home the opening goal. We had to wait a bit for any more such quality. Athlone’s Kealon Dillon was sent clear by an accidentally Pirlo-esque through ball. But Dillon’s shot had already cleared the stand behind the goal before we’d finished wondering whether the pass was intended or just an attempt to win a centre-circle tackle.

Pats’ second goal was a tap-in by their number nine, Christy Fagan, who was by then turning into the star of the night with his willing running and determination not to give up on the lost causes regularly belted into orbit by his midfield colleagues. The goal was created by Peter Crouch stunt-double Craig Forrester, whose 45-yard volleyed strike at Drogheda the previous week has become a huge YouTube hit. “Forrester scores absurd goal in Ireland” was the semi-disbelieving but accurate headline. Fagan’s goal didn’t quite end the match as a contest. And immediately after the interval, there was genuine hope among the Athlone few, alongside whom I sat in the second half. But having sat behind the goal Pats occasionally played towards in the first half, I only really joined the travelling Towners to get close to the majority of the second-half action, which was eventually proven wise.

I was further rewarded with a bird’s-eye view of a comedy third goal on 75 minutes, Town keeper Craig Sexton swiping at thin air as a backpass bobbled over his right foot and then slipping…TWICE…as he scrambled in vain to stop Lee Lynch laughing the ball into the unguarded net. Think Sunderland’s Vito Mannone at Manchester City…and add an imaginary clown costume. Two minutes later, Fagan side-footed home a deserved second goal, before adopting a shoot-on-sight policy in search of a deserved hat-trick, which nearly burst the side-netting on two occasions. If Roy Keane had been in Inchicore in search of domestic talent to boost the Ireland squad, Fagan was probably the only player he would have even considered considering. And even then, admirably though Fagan played, Keane would not have considered considering him for long.

Four-nil it finished, then. And Pats look strong candidates to retain their title, as they are in an LOI top four – with Cork City, Dundalk and Shamrock Rovers – already opening up a gap on the other eight teams. Athlone have since picked up their first point of the season with a 0-0 home draw against mid-table Bray Wanderers. But defeat in Inchicore put paid to the management tenure, by what looks like a reasonably friendly mutual consent, of Mick Cooke. Hapless though they were on the pitch against Pats, their predicament was perhaps best summed up when they attempted a second-half substitution. The fourth official held up the number 12, which brought no reaction from any Town player, other than quizzical looks at each other. It was some time before the fourth official was told that Athlone hadn’t fielded their number 12, the injured Neill Harney. New boss Keith Long is appropriately-named for the task that lies ahead of him.

But as I say, for all the night’s faults, it was as good a way to spend a Friday evening in Dublin as any. If Roscommon’s Gaelic footballers have as successful a season as their promising young side are suggesting they might, I could be back in Dublin again during the LOI season. And if St Pats are the only Dublin side at home that Friday, I won’t mind at all.

Odd Goings-On At Blackburn And Watford 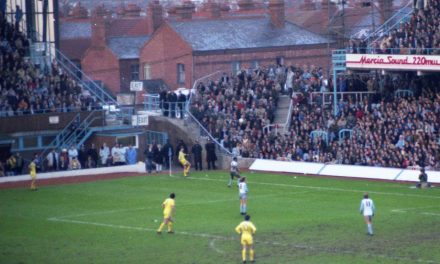