Hello boy. By the time you’re old enough to read and fully understand this, most of what I’m going to tell you about here might well be redundant. You’ll be old enough to make your own decisions, to have found your own moral compass. Having said that, though, I’m your father. I’m also British, though, and it’s a fairly well established fact that the typical British parenting style falls under the category of being polite yet distant, so I thought I’d write these now, in the few days before you issue forth into the world and take it over. And one day, perhaps, we’ll read these together, see how I’ve got on and, considerably more importantly, see how you’ve got on. At the moment, when I’m writing this, you’re due to be born in two days, on Monday 14th September 2015. It looks like you’re going to miss that date, though. As I write this, I don’t even know when your birthday will be, and it’s not even because I’m hopelessly forgetful (like your  grandfather) or because I’m completely senile, though there is a chance that there may be by the time you’re old enough to read this. Crazy, huh? I’m pretty certain that I’ll be able to remember it, if that’s any consolation for the crushing embarrassment that you’re feeling right now.

You’re reading these words on the internet (I assume – there’s a strong possibility that the internet will have been superceded by something even more extraordinary than the internet by the time you’re old enough to understand the meaning of the word “superceded”), so I should probably start by pointing out that your father writes about football on the internet. I don’t do it for money. I do it because there are stories to be told, because I have next to no appreciation of art whatsoever and this is the nearest I can manage to being creative in anyway, and because I do, often in spite of myself, love this ridiculous sport. By the time you read this, it will almost certainly have played a role in your life, too. But here’s the thing. Football can do weird things to people. It can make them behave extraordinarily badly. It can be unhealthy. I do, however, believe that for all my many, many faults, my personal relationship with it is quite healthy, so I thought it would be a handy exercise for me to give you some handy hints and tips to help you with your relationship with it all.

There’ll be little point in speaking to your mother about it. She know very little about any form of sport and somehow contrives to find a way to care even less. She’ll feign interest, of course, and she’ll be quite convincing. I might even say that she’ll care about it to the extent that she can because she cares so much about you. This particular pastime has been set aside for you and I, though. I’ll be at work a lot, so won’t be able to spend too much time with you during the day. I’d love to, of course, but those toy dinosaurs and your Christmas and birthday presents don’t pay for themselves, you know. Saturday afternoons, though, will be ours, to go out and bond, to build our own little world that is ours, all ours. But I’ve seen first hand how football can make people make people behave incredibly badly and I don’t want you to fall into this trap. So here are promises, some advice, and some hopes for a future that hasn’t been written yet, but will have been by the time you see this for the first time.

– A few months ago, earlier I’m 2015, I wrote something about fatherhood and football. It was meant humorously, but I think there was probably a serious message at the heart of it. I’m not going to tell you which football team to support. Ultimately, that’s your decision and not mine. But if you are to watch it and enjoy it, then there really is no substitute for being at the match, and if you do end up supporting Real Madrid or somebody like that, you’re not going to be seeing them live very often. Your grandfather supports Tottenham Hotspur, just as I do – nominally, at least. But I’m not going to force you to form a bond as strong as that between a supporter and his football team based solely on my preferences. I mean, quite asides from anything else, pushing you to support Spurs might be considered psychological abuse, in some quarters. You’ll find the one that fits when you’re good and ready.

– I hope you play football, boy, I really hope you do. It’s good for your health, for one thing. But it can be very good for you in other ways. Quite a few people reading this in 2015 will probably roll their eyes at me saying this, but there was once a French philosopher called Albert Camus who famously said that, “All that I know most surely about morality and obligations I owe to football.” It’s a very famous quotation but, having played a bit myself, it happens to be one that I agree with. Playing football teaches you about teamwork and co-operation, about understanding the physical strengths and limitations of others, about highs and lows, and about being important to other people for a common cause while those people are just as important to you. Some people behave very badly on football pitches but, when you think about how seriously so many people take it, the fact that so many don’t should tell you something about the human condition. We’re capable of being good, too.

– Winning isn’t everything. You’ll probably come across a lot of people who’ll tell you otherwise and I don’t want you to think that winning isn’t something that you should strive for, but when all is said and done, if you’re not enjoying it, you shouldn’t ever be doing it. If you’re playing football and your team is losing heavily, you might want to reflect upon the fact that stories about losing 10-0 are always funnier than stories about winning 2-1, and about the fact that in the overall scheme of life’s rich tapestry, having a story or two about getting thrashed at football will stand you in good stead in conversation for the rest of your life. It’s plenty possible to enjoy football without winning. Should you end up supporting Brighton and Hove Albion, you’ll probably already know this by the time you read these words.

– I’ve been reading quite a bit in the newspapers (they were like websites in the old days, but printed on paper) recently about the decline of parental behaviour at their children’s matches. I doubt if this is a fashion. I think it’s probably been declining for years on the part of some people. But money does strange things to a person, boy, and being very good at football can earn people a lot of money. I promise you now, and you can hold me to this, but I won’t scream and shout at you to “get back into position” or whatever, that I won’t put undue pressure on you to win at all costs. I’ll cheer for you, and every other player on your team. Should you ask my advice, I’ll give it, but I’m not your coach and I’m not the referee.

– Professional sport has always felt to your father like a blank slate upon which we scrawl a lot of secrets about our inner selves. Those that do the scrawling, however, often only speak for themselves. I’m going to try to teach you to be compassionate, boy, to be caring and tolerant of others. I’m going to try to teach you that hatred and jealously are destructive emotions that don’t benefit you, in the long term. But it’s important that you remember that football is something that you should do, whether as a player or as a supporter, because you enjoy it. Life’s too short to tie your brain in a knot of anger, so appreciate it for what it is, learn to see the good in it, laugh at the humour, at the hubris, and the absurdity of it all. Abs of you only take one thing from all of the words that I’ve written for you, remember this before anything else: it’s only a game, and there’s nothing wrong with that, at all.

Good luck on your journey, boy, and try not to hurt your mother too much en route. We’ll see you in a few days. We can’t wait to meet you.

You can look at embarrassing old photographs of your father on Facebook with Twohundredpercent by clicking here. 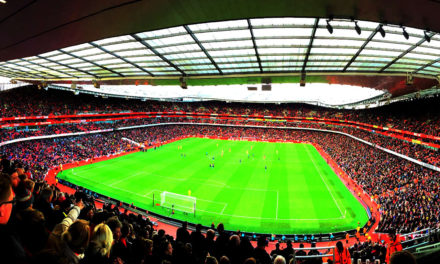