Football Is For Life, Not Just For Christmas

When call me negative, I simply say “no, I’m not” and wait for the laughter…and wait… But the just-finished festive football fun showcased much of the negative in the modern game.

Some other negatives are on-going. In 2017, Rangers were confirmed as cheats when the UK Supreme Court ruled that their scheme to wilfully avoid tax on player salaries was illegally funded. Rangers failed to meet legal obligations to tax AND football authorities, admitting to doing so to sign players they, ahem, “perhaps” could not otherwise afford. Yet Scotland’s football authorities want them to keep the titles they cheated to win. Corrupt, Scotland’s football media would call it, if it wasn’t itself so…oooh, what’s the word?

(NB: Even West Brom boss Alan Pardew called Dean’s decision “fortunate,” though who knows why he didn’t just say “it wasn’t a penalty.” Such honesty could surely only be beneficial).

Wenger subsequently succumbed to his more trademark persecution complexities. Before Wednesday’s Chelsea game, he called Arsenal’s 2017/18 penalty concessions a “concerning co-incidence.” In THAT post-match interview, he told Shreeves that “when its repeated, it’s not co-incidence.” And he labelled Chelsea’s penalty a “farcical” decision, as Shreeves made a non-existent controversy the focus of a fantastic match (Sky’s refereeing ‘consultant,’ ex-EPL ref Dermot Gallagher, having already backed match ref Anthony Taylor’s decision).

But at West Brom, Wenger seemed pre-determined to rant at the EPL’s oddball festive season scheduling. And despite Arsenal’s pulsating display against Chelsea undermining his narrative, Wenger had a point; his rant also providing the most delicious visual irony.

“If you should have won and you make a mistake, you deal with it,” he began, “but…the schedule is not right. West Brom has five days to prepare (for) a game like that, we have three. Chelsea has four days to prepare (for) the game on Wednesday, we have three. The Premier League has to become serious and look at how the schedule is fair or not fair. On our side its completely unfair.”

The holes in this argument were legion. Every EPL team had a four-match festive season schedule and Arsenal had more time, 13 days, to complete that schedule than everyone else, bar Tottenham and West Ham. Each team playing on New Year’s Day completed four games in TEN days, bar Liverpool, who took 11. Crystal Palace had five days to prepare for their game against Arsenal, Arsenal had six. But he still had a point.

“Jose Mourinho complained about the schedule,” Shreeves asked, suggesting that “lots of managers are unhappy with the schedule.” But if Shreeves was trying to trick Wenger into inadvertently agreeing with Manchester United’s attention-seeker-in-chief, Wenger was happy to be tricked. “Yes, of course,” Wenger replied, adding the unexpected, possibly unprecedented suggestion that Mourinho’s moaning was an “even better reason to look at it.” And he STILL had a point.

“Don’t give them ideas” must have echoed across the football-watching nation when Wenger added: “If we play every day, I have no problem, if the team we play against has played the day before as well, I accept it completely.” Full Christmas and Boxing Day schedules next season, then. “But the way they organise the schedule cannot be right, its nothing to do with top-level sport.”

And here was the irony. The “they” was not just the EPL. Part of the problem was LITERALLY UNDER WENGER’S NOSE, the Sky Sports microphone Shreeves was probably holding rather nervously, if he’d spotted the irony. “You think…you were maybe not as sharp today as West Brom were?” he asked. “Of course,” Wenger stressed, adding the killer that if “you have played top-level sport, you wouldn’t even have questioned that.”

Naturally, Sky’s pundits echoed Shreeves’ reluctance to address their fundamental role (with emphasis on the “mental”) in the scheduling. And, as naturally, commentator Martin Tyler was less reluctant to credit Transport for London for hooking Tottenham v West Ham out of last weekend’s schedules, responding to Pardew’s echoing of Wenger’s complaints.

Switching Tottenham v West Ham to Thursday left both teams playing twice in 48 hours, starting their two-match “New Year” schedule after half the EPL had completed theirs and stretching Sky’s “Christmas is for football” sloganizing towards Easter. West Brom also had a two-day, two-game spell. “Terrible” scheduling, which put players “at risk of injury,” said Pardew. “The league has to be stronger and say that two days is not right.”

The commercial logic of Sky’s scheduling was plain enough. Showing games on 11 days out of 14 could only boost the sponsorship/advertising revenues which are such a bog part of their business model (I mistyped “big” as “bog” there but either seems appropriate). But the quality of football on offer between Saturday and Tottenham’s win at Swansea on Tuesday demonstrably suffered (it was hard to know if commentator Alan Parry(CHK) was saying “this is Dyer, Dier or dire”).

On BBC Radio Five Live on Saturday night, Robbie Savage declared that he’d “seen better games in the Championship” than the unforced-error-riddled Celtic/Rangers encounter. He probably had. But this crass attempt to equate Scotland’s Premiership with England’s Championship was spectacularly Ill-timed, hours after Newcastle v Brighton and Huddersfield v Burnley, and at half-time in Manchester United v Southampton.

On New Year’s Day, Everton v Manchester United had even less excitement than expected from a Mourinho/Sam Allardyce encounter. And even the normally thoughtful Graeme Souness blurted out criticism of the schedule to excuse a wretched first half, with the crowd so little-enthused that you could hear Sammy Lee from the Everton bench. Which is NEVER a good thing.

But whether by instinct or instruction, proverbial punches seemed to be pulled as soon as it emerged that the logical conclusion to the scheduling argument was to blame the ultimate schedulers, Sky themselves, who have paid billions of pounds for the privilege. And the tension this dawning realisation caused made for rather better telly than much of the football.

Manchester City are MANY petrodollars, and 15 points, above this fray. And boss Pep Guardiola’s festive-schedule criticisms were born of pure footballing disbelief, after years managing in leagues with December breaks. He was probably thinking “what the fcuk?” rather than “why the fcuk?”

But despite BT Sport’s emergence as an EPL broadcaster, Sky still pay too many of the bills at too many EPL clubs for their role in the festive fixture fcukwittery to be truly exposed. Certainly not in public. And VERY certainly not on-screen. How long that dynamic lasts will also make for more interesting viewing than a tired, listless, Mourinho-coached Manchester United.

Sky also addressed an interesting side-issue from the wreckage of Dean’s penalty-box whistle-happiness. Sky fielded a weakened punditry team at West Brom, arguably taking a cue from Stoke City boss Mark Hughes resting players last Saturday with ‘bigger’ games in mind. And with similar success (I suspect Hughes will be ex-Stoke manager when you read this…possibly before I’ve finished typing it).

It took Thierry Henry nearly half-a-minute to say “percentages” on New Year’s Day (Souness: “Were you out last night?” Henry [sternly]: “Yes”). Yet even at the height of his linguistic struggles, he was offering perceptive insight beyond ex-Arsenal midfield scuffer Ray Parlour’s capabilities. So, hopes were not high when Parlour, Jamie “I’m turning into my Dad” Redknapp and ex-West Brom defender Liam Ridgewell broached the subject of VARs’ possible role in a controversy such as Dean’s penalty howler.

It should have been a short discussion. Redknapp raised the “problem” of Dean’s decision being a matter of (mis)interpretation and an extra official only adding another interpretation. It wasn’t a huge leap of logic to suggest that this was precisely why VARs would not HAVE a role in such a decision. VARs would only determine if Chambers had handled the ball at all, not determine his intent.

But it was too huge a leap of logic for Redknapp and his colleagues. Redknapp’s “problem” won’t exist, if published VAR guidelines are followed. And that would have been clear, if published VAR guidelines were studied, which ought to be a given before debating VAR’s potential effectiveness or otherwise. Even Ridgewell was no help, despite now captaining Portland Timbers in Major League Soccer in the United States, and thus playing under a VAR ‘regime.’

This, of course, is an old bugbear of mine. Former and current players parachuted into presumably well-paid broadcast journalist roles and exposed as charlatans the moment they are required to BE broadcast journalists. Like Steve Claridge pontificating on Financial Fair Play (FFP) on Radio Five Live in 2011. Reporter Ian Dennis took personal issue with my article on this site condemning this ill-informed coverage, despite my exempting him from the criticism (I was, and remain, an admirer of his work).

The Independent on-line newspaper recently stated that Sky audiences “deserved better” than Noel Gallagher (formerly of popular beat combo Oasis) as a pundit for their Manchester derby coverage. Yet Gallagher is a genuine City fan who was, in response to the popular song, “there when they were shit.” So, he could, and did, offer an informed genuine fan’s perspective and, for a bit anyway, had genuinely interesting things to say. The Indie’s criticism would have been far better applied to ill-researched nonsense from ex-players.

As I type, defence have held attack to a 1-1 draw at Wembley, with West Ham’s forward players as involved in the game for 70 minutes as Lionel Messi in that pretentious w**k of an Adidas commercial. And Hughes is, surprisingly, still Stoke manager. But “Christmas,” now officially “for football” rather than that ‘birth of our Lord’ malarkey, is over. And EPL clubs can take time to evaluate the effects of the hectic festive sched…sorry…what?… FA Cup Friday, Saturday and Sunday? Carabao Cup Tuesday and Wednesday? (Oh…and my team, Kingstonian, are at home on Monday, in case you were worried that I’d have nothing to do).

When they say “football is for LIFE,” they mean it. 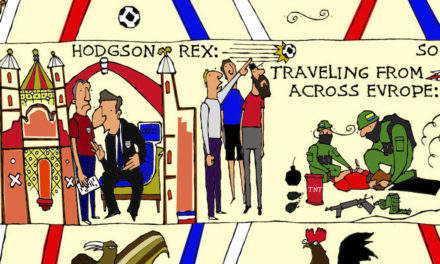 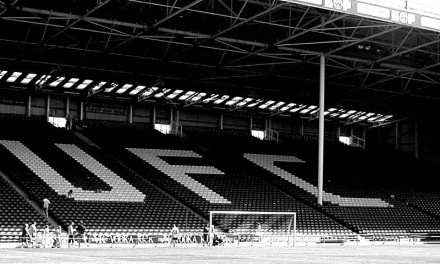 Ched Evans & A Hole Too Big To Be Dug Out From

Is Hull City’s Hell Nearly Over?