Press reports of a recommended 90-day suspension of Fifa president Joseph Blatter were expected by approximately no-one. Not only because Blatter has yet to appear before, or present any evidence to Fifa’s Ethics Committee (EthCo) concerning the most recent allegations. But also because the EthCo has long since proved an oxymoron and, increasingly, a tool for the elimination of Blatter’s electoral opponents. Even Blatter’s investigation by said committee was an echo of 29 May 2011, when the up-for-election president was interviewed along with rival candidate, Qatari fixer Mohammed Bin Hammam, and the repugnant Jack Warner, a mere three days before that election was due to take place.

So when it was announced on 26th September that Blatter was in the EthCo’s sights alongside Uefa president and… guess what?… Fifa presidential candidate Michel Platini, hopes of Blatter’s demise had to be tempered by the lessons of recent history. Furthermore, the expected EthCo appearance of South Korean former Fifa vice-president and…yep…Fifa presidential candidate Chung Mong-joon hinted at a systematic shredding of the ballot paper. If this continued, some cynics mused (well, I did anyway), there might be nobody left when nominations closed on October 26 and Blatter would, “reluctantly” I’m sure, have to pick up the presidential mandate he “laid down” in June.

In his opening remarks to the July 16th United States Senate sub-committee hearing into “the governance and integrity of international soccer,” the world’s top Fifa-scourge Andrew Jennings referenced Blatter’s “hand-picked Ethics Committee” who “obey his instructions.” And it was not a difficult description to justify. The Bin Hammam EthCo hearing in 2011 got ball-by-ball coverage in the recently-published book The Ugly Game. Then, Blatter was exonerated, Bin Hammam was not and Warner…retired from all football positions, thus placing himself beyond Fifa’s disciplinary capabilities, with his “presumption of innocence maintained.” Handy, that.

Many 2015 presidential election candidates struggled for credibility. “Publicity stunt” would glamourise former French international David Ginola’s bookmaker-backed “campaign.” Former Portuguese international Luis Figo’s bid was only credible by comparison and carried as much weight as you’d expect from someone who was last seen advertising grey hair destroyer Just for Men (“for me it’s still number one”). While Bahraini Prince Ali Bin Al Hussein’s genuine opposition credentials were undermined by his transparently Blatter-backed election victory over Chung Mong-joon for the Asian Fifa vice-presidency in January 2011. But for those left, the EthCo loomed.

Aside from consecutive triumphs in the “most English-sounding Chilean” competition, former Chilean FA president Harold Alfred Mayne-Nicholls had a body of credible Fifa work behind him including his role chairing the 2018 and 2022 World Cup Bid Evaluation group. Unfortunately, this role was to prove significant for “unusual” reasons. On July 6th, Mayne-Nicholls was banned for seven years from “taking part in any kind of football-related activity at national and international level” by the “adjudicatory chamber of the independent Ethics Committee.” However, contemporary newspaper reports struggled to quantify his crime.

His “conviction” centred on a 2010 email exchange with Andreas Bleicher, head of Qatar’s Aspire sporting academy. During his inspection tour of Qatar that September, Mayne-Nicholls was given a grand tour of the facility. And so impressed was he that he asked Bleicher if the Academy could see its way clear to allowing his sons to train and his brother-in-law to coach tennis there. Bleicher saw the potential danger in such a request, even though Aspire was not involved in the Qatari bid. He emailed Mayne-Nicholls suggesting it “might be advisable not to follow up on these topics at this point, as this might leave space for incorrect interpretation.” It was a prescient warning. Mayne-Nicholls took Bleicher’s advice and nothing came of the requests. In December 2010, however, Qatar was awarded host nation status for the 2022 World Cup. In this context, a bid inspector chairman’s request to use Qatari sports facilities might indeed have “left space for incorrect interpretation.”

However, to paraphrase BBC comedy classic Blackadder goes Forth, there was one TINY flaw in this theory. It was b***ocks. As even The Ugly Game, sub-titled The Qatari plot to buy the World Cup, noted, Mayne-Nicholls’ evaluation report, released on November 17 2010, was “a complete demolition of (Qatar’s) plans.” So Mayne-Nicholls received no favours from nor did any favours to Qatar in the bidding process. Yet banned he was, scuppering any presidential ambitions he had. Handy, that. And with Platini and Mong-joon’s ambitions potentially similarly scuppered, at least until after the closing date for nominations, the EthCo’s work appeared done. There’s a potential repeat run by the underwhelming Prince Ali. And feelers were put out by the magnificently-named and Blatter-endorsed South African Tokyo Sexwale (pronounced “Sehwalay” by the humourless, with the BBC pronunciation unit helpfully suggesting the ‘x’ be “pronounced as a velar fricative”). So the chances of February’s election heralding any worthwhile new era for Fifa governance looked slim. When suddenly…

It remains to be seen whether the Ethics Committee’s action against Blatter is a “game-changer.”  The first question for many is still “how” not “if” Blatter will get out of this. Yet it may be his biggest task, as the EthCo frontmen are two former reliables, Hans-Joachim Eckert, who helped submerge the Garcia report into the 2018 and 2022 World Cup bidding process, and Cormel Borbely who helped submerge Mayne-Nicholls’ presidential ambitions. In 2011, wholly-justifiable calls for the presidential election to be postponed were swatted away by Blatter and a nauseatingly-supportive Congress. If these 2011 calls echo in 2015, Blatter and his congressional lickspittles may be a touch more receptive. After all, there’s no presidential vacancy yet. Blatter can just pick up his mandate again once his suspension is lifted. Yet how can an organisation function legally, let alone effectively, with a president, general secretary numerous vice-presidents and other leading executives, past and present, under various forms of legal suspicion? Well, as a September 2014 Reuters headline read: Fifa’s ethics are unmatched by other sports organisations. All too true.

Bolton Wanderers: Tales From The Gartside 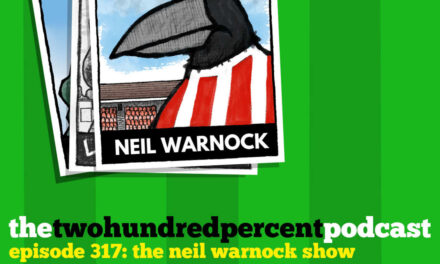 Some Words About The Situation In Dulwich