Dundee On The Brink

It’s a fortnight now since Dundee were plunged into their current crisis, and more than a week since the promise of a statement within 48 hours. Nothing has been forthcoming – at least in terms of official statements there’s been almost no news since then. Discussions and negotiations are ongoing behind the scenes to try and reach a deal with HMRC, but all the fans have had to go on is such gossip and hearsay as has been doing the rounds.

Obviously it’s very hard to know how seriously to take most of this – but the longer the situation goes on, the worse the likely outcome, and that gossip has become much more pessimistic this week to the extent that the BBC are now reporting the club as being “99% certain” to go into administration. Again.

The only concrete development in the past seven days was the news that the club failed to pay its wages at the end of September (the lastest update is that they “hope” to pay 50% of them today). And such is the speed of their descent from a seemingly healthy position to a club in meltdown that this non-payment barely came as a surprise. Unlike, say, the Sheffield Wednesday crisis which has been brewing for months or even years, this one has come down on their heads at remarkable speed. Only at the start of last month Chairman Bob Brannan was still boasting of their lack of debt and strong financial position in an interview on Radio Scotland. Okay, we weren’t to know that the claim to owe nothing except soft loans to directors was a flat-out untruth – but *he* should have known it, right?

But nothing suggests they saw this coming. Indeed, Dundee signed two players during September – Njazi Kuqi (Shefki’s brother) for the season and Milan Misun on loan from Celtic. Yet within a couple of weeks it was panic stations. Privately, the word was that the money was available to pay the wages (apparently £140K – but again, we’re relying on unofficial sources here) but they were advised not to. The advice came from Blair Nimmo, the insolvency practitioner best known for liquidating Airdrieonians a few years ago, and who has now been drafted in to advise and help negotiate for Dundee.

To be fair, there were some who predicted all this. There are those who were preaching doom a year ago, when benefactor Calum Melville first got involved and Dundee started spending his money. There were some promising us this would come to a sticky end simply because of the nature of the project and who are now basking in I-told-you-so’s. And I suppose they were right, so fair play, I can’t really argue.

But I don’t accept that it had to be seen as inevitable that it would end this way – it’s simply rank bad management. The immediate problem, as reported last week, is this HMRC debt, some £365K on which they are demanding immediate payment. Spending excess money on wages while neglecting the tax bill is a crass and obviously stupid thing to do – but it could just as easily happen on any level of income. You could make the same mistake, if you were an idiot, on whatever money you had available to you. Conversely, there are many clubs getting by just nicely with additional help from benefactors without running themselves into trouble.

So I don’t think it can be levelled at Dundee fans that they should have realised that this scenario was on the cards. But on the other hand, nor do I think they can be excused from knowing there had to be a risk of it. Any club spending so far beyond its operational means, and relying on someone else to keep coming up with the money to pay long-term contracts, has to be aware that there’s some danger involved. It only needs one boardroom bust-up, or a change in personal circumstances, or for that someone else just to turn out to be a bit of a guiser and you’re left stuffed. In Dundee’s case all of these things may have come to pass, but most fundamentally there seems to have been a major misunderstanding as to just what Melville was, and wasn’t, willing to fund. Or else, he’s just changed his mind. Judge for yourself – compare and contrast this interview from summer 2009 … with this one from the week before last:

I came here to help, not provide all the money that was needed and I’ve always said others, including fans’ groups, have to keep coming up with finance. For a long time now that’s not been happening. I appreciate their support and what’s been done in the past but they do own 26 per cent of the club and have a responsibility to keep trying to raise funds.

This last comment is almost breathtaking. If he wants to put some extra cash into a football club, that’s his lookout. He’s got no particular grounds on which to hope or assume someone else will do the same, but if he’s only willing to fund it on that basis, fine. Just don’t change your mind midstream. To rack up debts and commitments and only then say, well hang on, the fans need to put some more money in too – what other business in what other field would dream of speaking of its customer base that way? To expect or even demand that the fans, the same ones who put so much effort in to save the club in 2003, should rally round again to help bail out his own hopelessly-mismanaged vanity project … I’m pretty much lost for words here.

Whatever the cause, and whoever is to blame for this huge misunderstanding, it is of course the board who have to carry the can for it (and unfortunately that includes the Supporters Trust rep on the board). It’s their responsibility to make sure the club can meet its liabilities, and no amount of duplicity on Melville’s part can excuse them allowing the tax debt to reach its current extent before they flagged up that their might be anything amiss. Again, that’s simply bad management.

So what happens now? Once again we’re having to rely on gossip and some reading between the lines, but – initially at least – it seemed that between Melville and some other money raised from local businessmen, this tax debt in itself would not be an insurmountable obstacle. But then what? It’s the first week of October and evidently the season ticket money is (apparently) long since gone. Their operational income is clearly inadequate for funding their inflated wage bill. Someone will have to prop the club up, at least until January when they can try and shift players from the wage bill and cash in on their one saleable asset (Scotland U21 striker Leigh Griffiths) – and probably for the rest of the season.

So on the one hand Melville has now proved so unreliable and helped get the club into such a mess that he really needs to be drummed out as soon as possible; on the other hand, they probably can’t get by without his continuing to fund the commitments he has encouraged the club to take on. If he’s not willing to do so then it’s trouble. That’s the scenario they’re having to face now – indeed the latest rumour is that Melville has disappeared again and may not even come good on the limited pledges he made to contribute to the tax bill just last week. If that turns out to be true then they will go into administration, possibly as early as today (Wednesday).

The implications of that are very much up in the air. One report last week claimed that soft loans (to Melville, Brannan, and John Bennett who owns the ground) amount to more than 75% of the debt, which would allow them to force through a CVA. However, it’s not clear that Bennett, in particular, is willing to write off his loan in such fashion (he has never been on the board and is not responsible for any of this mess). It also rather contradicts earlier promises that Melville’s money was all being given and not lent. Given that so many earlier comments have turned out to be untrue that isn’t in itself much of an objection – but if they’re going to try and claim retrospectively that money was loaned even if it wasn’t correctly recorded as such then things could get messy.

In any case there are more immediate concerns. The debt may be paltry compared to their previous administration in 2003 – but this time there are no assets, there is no income to speak of except matchdays, and none of those for three weeks, which will not be sufficient to get anywhere near covering another month’s outgoings. And of course, first and foremost the administrator will have to satisfy themselves that there’s going to be enough money to pay their own not inconsiderable fee. Before we worry about what sanctions might be applied by the SFL and what the long-term implications would be, it cannot simply be assumed that the club would continue to exist at all.

I can’t really believe that a club of Dundee’s stature would be allowed to fold, but unless Melville comes good at the last, it’s probably going to need someone else to come forward who’s willing to put some cash in more or less immediately. The danger is real and it may come to a head as soon as this week. 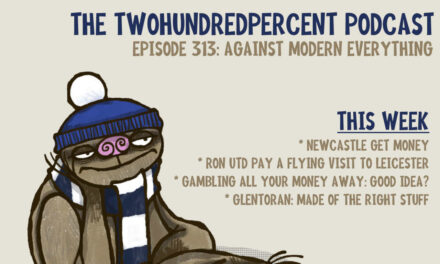 Podcast 313: Against Modern Everything

The 200% World Cup: I Can’t Help Falling In Love With You