This season was always going to be a curious one in the Premier Division of the Isthmian League. With only one automatic promotion place at the top of the table and the heavily financially-doped Billericay Town grabbing most – though, as supporters of Dulwich Hamlet will attest, not quite all – of the headlines, clubs with aspirations of stepping up a level might have been forgiven for putting any explicit displays of ambition on hold for a year. Meanwhile, at the bottom of the table, league reorganisation meant only one relegation place. In such an environment, there were always likely to be a lot of relatively meaningless games as the season wound down, but even against this background one club has contrived to make its fixtures for the remainder of the season even more inconsequential than they might otherwise have been.

Earlier this week, the league confirmed that it has received notice of resignation at the end of this season from Thurrock FC. None of this is much to do with what has been going regarding the first team this season. At the time of writing, Thurrock sit in thirteenth place in the league table, and will not be troubling either end of the league table. The story of Thurrock’s imminent demise is instead tied up with the South family, who have owned and supported the club since its formation, as a result of a merger between two junior clubs, as Purfleet FC in 1985. The club changed its name to Thurrock in 2003, in order to try to capitalise a little better on its immediate surroundings, close to the gargantuan Lakeside Shopping Centre.

Throughout its early years, the club made steady progress up through the divisions of the non-league pyramid. Having initially joined the reserve section of the Essex Senior League, Purfleet transferred into the main division the following year. Their stay, however, was brief. After finishing in third place in their first full season, they were promoted into the Isthmian League the following season and, at the end of their firsts season in Division Two North of that league, they were promoted as runners-up. Relegation followed the next season, but after jumping between this division and Division One of the same league, promotion into the Premier Division of the Isthmian League was achieved in 1994. The club wouldn’t be relegated again until two successive relegations dropped it from the National League South back to Division One North of the Isthmian League in 2012 and 2013.

The clubs most successful period on the pitch came at the end of the last century and at the beginning of this one. Between 1999 and 2004, Purfleet finished in the top five in the Premier Division of the Isthmian League in four, and were invited to join what is now called the National League South upon its formation in 2004, the year after their name change. At the end of their first season in this division, they had a shot at promotion into the National League after finishing in third place in its inaugural season, but defeat in the play-off semi-finals at the hands of Eastbourne Borough turned out to be a high spot in the history of the club. A high concentration of clubs and the close proximity of London has always meant that attracting paying punters through the turnstiles can be difficult, and the name change and relative success of the period surrounding the millennium couldn’t translate into a higher profile and higher attendances for the club.

The last couple of seasons, however, had seen an upswing in the club’s fortunes on the pitch. Following relegation back to Division One North of the Isthmian League in 2012, they finished in the play-off places in three of their first four years back before getting promotion back to the Premier Division last season after beating AFC Hornchurch in the semi-finals and Maldon & Tiptree in the final. This season’s perfectly respectable mid-table league position has confirmed that, from footballing perspective, the club certainly wasn’t out of its depth. Over the course of its history, cup competitions proved to be less rewarding for the club, although its only appearance in the First Round Proper of the FA Cup saw Thurrock hold Luton Town – then undergoing a financial trauma of their own after the disastrous ownership of John Gurney – to a one-all draw at home before being beaten by three goals to one in a replay at Kenilworth Road.

In August of last year, however, came the news that many had been expecting for some time. The poor health of owner Tommy South had been known for some time, but the statement made for sad reading nevertheless:

I have decided due to health reasons that this will be my last football season and have come to the decision to put Thurrock FC up for sale. I will see this Season out my commitments stay as agreed.

It is a decision I have not made lightly and much thought and consideration has gone in to this. Many sleepless nights have been had and I feel the time is right for me to now put my health first. Everyone that knows me well knows for the past year I have had my own extremely tough battle with cancer and I am finally after a long fight now in remission. The loyalty and support my Manager, Management staff and Players have shown me has been outstanding and I will be forever grateful to them.

By the new year, however, it was becoming increasingly clear that finding a buyer for the club was proving to be a challenge. Focus instead started to turn to selling the club’s ground itself, and this week’s resignation is really little more than confirmation of what non-league insiders had been aware of for a long time already, that the land upon which the ground is built is worth considerably more than Thurrock FC itself. South himself is understood to be in remission from cancer now, but such circumstances have a tendency to make one re-evaluate one’s priorities in life, and in this case the owner of the club appears to have arrived at the conclusion that he is at the end of the line in terms of what he can do for the club. The Isthmian League’s chairman, Nick Robinson, meanwhile, had this to say upon receiving the club’s resignation this week:

It is a very sad day for us to have a resignation in these circumstances. The Club have been fine members of the League for some 22 seasons in total. We have many happy memories of the Club and particular their exploits in The FA Cup. I hope it is not the last we will see of Tommy and his colleagues.

Ship Lane, the club’s home, is one of Essex non-league football’s more idiosyncratic venues. Built into the side of the Thurrock Hotel, it was smartly painted in the club’s green and white colours, with covered terracing behind each goal – which is even now far from guaranteed at a non-league ground – and the air of what a non-league football ground really should be, far removed from the money and avarice of the professional game, a place to watch a football ground of a Saturday afternoon. It’s problem, however, was its location. With the nearest railway station two miles away and no housing particularly nearby, and an average home attendance of just over 150 tells its own story in terms of what must have felt like an increasingly uphill battle, both financial and to keep functioning every other Saturday afternoon.

If we step back and detach ourselves slightly from the emotional pull of a non-league football club going to the wall, though, we might consider that it is somewhat surprising that this doesn’t happen more often than it does. There are 252 clubs between Steps one and four of the non-league game, and dropping a division to Step five adds a further 298 to the list, and this is before we take into account the 92 clubs of the Premier League and Football League, who take up 99% of the attention lavished upon the game by the media and possibly a higher still percentage of the money. These 550 non-league clubs largely live a hand to mouth existence, dependent for their survival on volunteers to keep grounds staffed on match-days, the munificence of benefactors of patrons to keep them financially afloat, and people to actually turn out to matches to keep cash flowing through the accounts.

Against such a background, that a tiny number of clubs should find themselves in the sort of predicament in which Thurrock found themselves should probably not surprise us. The FA, the Premier League and the Football League do little nothing to assist these clubs, and the world of multi-million pound television deals feels as though it happens in a parallel universe. The margins are narrow, and a good number of clubs are in hock to an individual or a small number of individuals in the same way that Thurrock have been since they were founded as Purfleet FC thirty-three years ago. The fact those with overall responsibility for the governance of the game as a whole in this country and the clubs that cream off the vast, vast majority of the money that it makes do almost the sum total of zero to support them means that this is a situation that probably isn’t going to change in the foreseeable future.

Bundesliga Week 14 Round Up – Insanity in Sinsheim 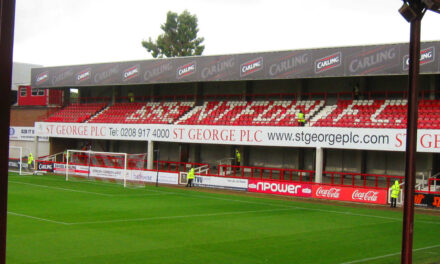