During the days, which now seem like a lifetime ago but which in reality were quite recently, of free and easy credit and hire purchase, the phrase ‘buy now, pay later’ became something of a mantra on the high street. Retailers wanted consumers to interpret this phrase in a very specific manner, appealing as it did to the strongest instincts of the human desire for instant gratification, but as time progressed consumers came to realise that by stressing the phrase differently it could come to mean something quite, quite different. Failure to repay on time could lead to court action and even the conversion of innocent looking loans into debts secured against their property, and the spiraling out of control of people’s personal financial positions became a familiar sight, with personal insolvency levels shooting through the roof.

This phrase sprang to mind this morning as Queens Park Rangers assaulted the last day of the transfer window with all the subtlety that we might have expected from a club with a little cash to spend, a pressingly desperate need to stay in the Premier League and Harry Redknapp as its manager. The flurry activity was such that we could even be persuaded that the club was acting in such a manner in order to render any attempts at parody futile. By the middle of the morning, Christopher Samba had arrived at Loftus Road for a fee of £12.5m and a reported wage of £100,000 per week, the sort of figures which prove the fears of those who have concluded that a vastly increased television contract is pretty pointless because football clubs will always find a way of throwing good money after bad, no matter how much they’re given to spend. And this wasn’t all. We might expect Harry Redknapp to have been shown with the look of mild panic in his eyes that you usually see in the facial expressions of shoppers in Marks & Spencer at four o’clock in the afternoon on Christmas Eve, a man who knows that he has until close of business today to wear Tony Fernandes’ cheque book until it starts to produce smoke, but Harry Redknapp is Harry Redknapp, and the manager is not spending his own money today.

But can Queens Park Rangers trade their way to safety? The oft-quoted statistic on the matter is that the club that is bottom of the table at Christmas almost never avoids the drop. This is often repeated with wonder, as if we should somehow be surprised that a team that has been terrible for the first half of a season should be statistically likely to be pretty poor for the second half of it as well. A team that is bottom of the table will have to haul its way above three others who similarly desperate to avoid falling through that trapdoor come the end of the season. The January transfer window, however, offers hope of salvation. There may not be much actual evidence to suggest that it is likely to happen, but for supporters who have little else to lose, the appeal of their club having a whole month – or even, yes, just a solitary day – to trade their way to a brighter second half of the season is am obvious one. It’s a throw of the dice, come on lucky sevens, and whilst the odds may be stacked against you hope springs eternal.

But here’s the thing about Queens Park Rangers – they’re not that terrible, and they’re certainly not so bad a team as to require a massive make-over in the January transfer window. They’ve had a couple of decent results recently, including a win against Chelsea at Stamford Bridge and home draws against Spurs and Manchester City which have hinted at an inner obstinacy which may prove very handy in the desperate scramble that the bottom of the Premier League table looks likely to become in the closing weeks of the season. The key to their current league position lays in the aforementioned comment about their results against Spurs and Manchester City, though. They were both draws, and Queens Park Rangers have been doing an awful lot of drawing matches of late. They’ve drawn ten out of their twenty-four Premier League matches so far this season, and converting just three of those drawn matches into wins would have seen the club out of the relegation places. On such narrow margins can survival or otherwise be guaranteed. Moreover, the decision to spend this amount of money at this time on a defender seems, well, odd. QPR have kept clean sheets against three of the Premier League’s strongest defences in recent weeks and are unbeaten in the league in 2013. But it’s their money, and their decision.

Will Christopher Samba or anybody else now being associated with the club – and at time of writing that number is as furiously high as anybody would have predicted – be the men to increase that conversion rate, though? Only time will tell, but it’s a strategy that comes with an inherent element of risk. The sensible thing for a club in a position like Queens Park Rangers would be to have cast iron relegation release clauses built into any contract signed while they are in the position in which they currently find themselves, but the panic that descends upon football on a day such as today makes this a market that is heavily weighted in favour of the players and if the appropriate safeguards have not been put in place with regard to the fine print on Samba’s contract, then in the event of relegation he could well prove to be a millstone around the club’s neck should the club tumble from the Premier League. And whilst hope does indeed spring eternal, we don’t need to look very far from cautionary tales regarding the potential folly of such spending from elsewhere.

The total cost of this one player over the coming years will, of course, not be the the £12.5m fee that is partly hogging the headlines today. Should he see his contract through to the end – and assuming no relegation release clauses or other contractual jiggery pokery – the final bill for his services would be more like three times as much. He had better be worth it, because with average crowds at around the 18,000 mark – a fact acknowledged by Redknapp himself after his team’s defeat at Newcastle United last month in telling the press that “you shouldn’t be paying huge wages when you have a stadium that holds 18,000 people” – he is a substantial investment for a club of this size. He is also, as any footballer is, a gamble and Queens Park Rangers have taken a very big gamble in spending this amount of money at this particular time on a footballer. We will know by the end of May whether they have thrown lucky seven or snake eyes on this occasion. 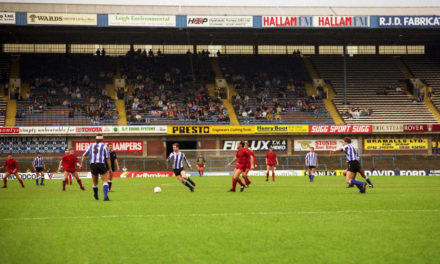