This year hasn’t been a very good year for integrity. No matter which side of the political schism that is currently playing out like an episode of House of Cards on mescaline you currently sit, the very idea that there are people left in the public sphere that can still act with a degree of principle has come to feel like a relic of a bygone age, like going to take the bins out and coming across a sabre-toothed tiger jumping over the wall into next door’s garden.

As it is in politics, so it is in professional football. The lure of money has become too much for just about anybody within the game to be able to resist, whether in the form of Lionel Messi’s unorthodox tax arrangements, broadcasters’ pathological inability to talk about just about any club match in terms that don’t involve the amount of money that winning might be worth, or the Football League’s comically inept franchising out of the Football League Trophy to the academy teams of the Premier League in the hope of, well, achieving something, probably.

So it is that we return to the real world after the four week long jamboree that was a relatively undistinguished European Championships to some curious news from the world of broadcasting. Colin Murray, formerly the host of Match of the Day 2 and Channel Five’s midweek football coverage and more latterly the host of a popular slot on the Talksport radio channel, has not always been everybody’s cup of tea, but this afternoon he announced that he would be leaving the station for reasons that seem surprising, primarily because they involve a degree of integrity and principle.

Murray is a lifelong Liverpool supporter, and this afternoon he announced that he would be resigning from his position at Talksport following the company’s recent sale to NewsCorp, the company that owns, amongst many, many other things, The Sun. In his statement, he said that, “While there are parts of News Corp that aren’t a problem, it is the inevitable future working relationship between TalkSport and the Sun that has made my position unsustainable”, before signing off with a #JFT96 hashtag, a clear indicator to anybody that had been unable to read between between his lines as to what his thinking behind the decision might be.

For the vast majority of football supporters, it is not even necessary to linger on the behaviour of that particular rag in the immediate aftermath of the Hillsborough disaster of 1989. It took fifteen years to squeeze an apology out of the newspaper for the damage that it caused, and by this time the damage that it had caused was so great that mere words were unlikely to do much in the way of healing. The Sun is effectively a bete noire in the city of Liverpool, and more than a quarter of a century on it doesn’t look likely that this situation is going to change that much. Bridges have been burned, and there seems little will on the part of the people of the city to rebuild them.

In the cut-throat world of the media, with advertising rates having already dropped precipitously over the last decade and likely to plummet still further over the next few years, there are no guarantees that your last job won’t be your last. As such, Murray has taken a bold stand over the sale of his employers to a company with which he does not wish to be associated. Considering how close he is to the top of his profession, it is unlikely that he will be out of work for that long, but we shouldn’t allow this to detract from a decision which says much about the nature of the man as well as the toxicity of the organisation with which he will not work.

Murray isn’t the only high-profile name to be leaving the station this week, following the announcement that Stan Collymore will not be having his contract renewed by his new overlords. Collymore has been with Talksport for eight years and has been something of a divisive figure, but eyebrows may well rise at such a decision being taken with regard to another broadcaster who has been outspoken in his criticism of The Sun over Hillsborough, as can be seen from this tweet, which was sent a little over two years ago. Whether the decision of the owners was anything more than a coincidence or not is something that we’re unlikely to definitively find out, but it is striking that the two departures should have been announced in the same week.

It is very easy for us to sit back and take pot-shots at those in the public eye who make career choices that we might not necessarily like the look of, form a distance. In this case, however, Colin Murray has made a principled stand and is receiving praise accordingly, and whilst there might be some who would argue that Hillsborough was a long time ago and that we should all forgive and forget, we only needed to look at The Sun this week at the paparazzo pictures of Paul Gascoigne that it published – which at the very least, to outside eyes, bordered on harassment – to establish that this is an organ that hasn’t really changed much of its attitude over the course of the last quarter of a century. Still bullying and tasteless after all these years. But one broadcaster has made a stand, at least, and for that he should undoubtedly be commended. 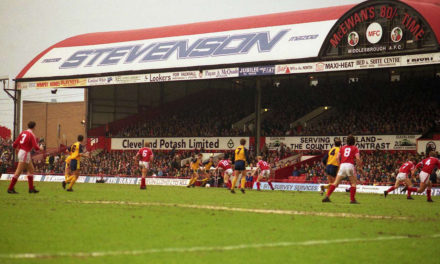