On a match-by-match basis, there haven’t been too many massive surprises since the return of the Bundesliga in Germany a couple of weeks ago. Bayern Munich have kept on winning, including a 1-0 win over Borussia Dortmund that leaves them hurtling at full speed towards yet another league title. Something, however, is different, and people are starting to pay attention to the possibility that football behind closed doors might be substantially different to other conditions. Indeed, what we may be learning in Germany right now is that supporters are more valuable to their clubs than some – perhaps many – of us had previously thought.

On the one hand, passive observers is exactly what a lot of football supporters are. A huge number of us only watch big matches on the television. Unless we’re stretching our definition of being ‘active supporters’ to the monthly subscription that we pay to watch it, all bar the few thousand people inside any ground are on the outside, looking in. On the other, though, results from Bundesliga matches played behind closed doors since the end of the lock down have indicated that supporters could be an important aspect of ‘home advantage.’ More than 40% of wins played behind closed doors have been away wins, whilst this simplistic overview doesn’t definitively prove anything, it certainly hints that they have something more of a role to play than being mere passive observers.

Both players and clubs talk up the importance of crowds getting behind their teams, but often in the past this has been blithely dismissed as “PR talk”, an easy win in a career in which public perception can go a long way towards keeping you in employment, or in which paying customers keep the machinery oiled. Some, though, might have taken the view that clubs, if sufficiently sustained by media rights alone, could one day deem fans more trouble than they’re worth. Few, though, would ever have assumed there would come a point at which a large number of matches would have to be played behind closed doors, allowing this possibility to be tested.

Now the entire concept of ‘home advantage’ is under the microscope, and it’s worth pausing a moment to consider what we could learn from all of this. Certainly, the numbers in the Bundesliga are striking. Only seven home games have been won from 33 since it returned two weeks ago – a home win ratio of just 21%, and almost half the season average of 40%. The post-hiatus away win ratio is 48%, up 11% on the season average. It’s possible that basing too many assumptions on a small number of figures is jumping to conclusions, and that other factors which may well influence the mindset of home players, such as familiarity with their surroundings and the exact dimensions of the pitch, may have not changed with the virus.

The Premier League, of course, should be watching all of this very carefully. They released a list of six matches which they believed would be played at neutral venues on the advice of the police at the end of last week, but it’s understood that clubs were unhappy with this and that the number has already been trimmed down to four. Nine clubs were believed to be in favour of neutral venues and four were believed to be against, with the identities of the others unknown.

Some believe that playing matches at neutral venues helps bigger clubs. It’s another “leveller” stripped from a match. It’s no great surprise to find that the four clubs against – Bournemouth, Brighton, Watford and West Ham – are all near the bottom of the table. Arsenal, Chelsea, Manchester City, Manchester United and Liverpool are all amongst the nine in favour.

And the problem is that no solution is going to please everybody. In an era where we’ve been groomed to be as tribal as possible and when money has distorted any notion of football still being a sport, the idea of any clubs – or at least more than a tiny handful – not acting solely in their own narrow self-interest seems unthinkable. The game is not conditioned in any way to benefit them for altruistic behaviour, and clapping emojis don’t count for much if you’re having to make a couple of hundred people redundant because you’ve got to halve your wage bill. Why on earth wouldn’t, say, Brighton & Hove Albion vote in their own narrow self-interest? After all, the smaller clubs in the Premier League don’t often get to hold any advantage whatsoever over their bigger and wealthier rivals.

But hat if the smallest clubs have voted for something that wouldn’t benefit them after all? The other four clubs known to have voted for the neutral venues proposal were Aston Villa, Crystal Palace, Everton and Newcastle United. Six of Aston Villa’s remaining home matches are to be played at Villa Park. Might they have stitched themselves up, here?

Or, and it’s worth remembering manager Dean Smith’s previous with data at Brentford at this point, had they seen something that which suggested that they might even be better off playing matches away from Villa Park? It’s irrelevant now anyway, since no Aston Villa matches were amongst the original six identified to be played at neutral venues, but you’d love to know the answer.

What this all ensures, of course, is that ‘sporting integrity’, in terms of the end of the Premier League season as we would normally understand it, will be stretched. Regardless of playing at home or away, the early signs may be that playing without a crowd may have an effect on results. But the fundamental principle of league competition is that everybody plays everybody else every season, at home and away. That asterisk will kind of have to be there, though none of this should distract from that sheer fact that Liverpool are the best team and will be deserving champions. Anything else is mere noise.

The Premier League is acting on police advice, but the decision has nevertheless proved controversial. Writing in the Guardian today, retired police superintendent Owen West stated that, “Sending their players and staff off to a neutral venue subcontracts that responsibility to someone else, somewhere else. Hosts of the neutral venues will see multiple teams and their staff coming through the doors on a more frequent basis – not the ideal scenario to maintain the necessary hygiene systems.”

There are plenty of criticisms to be made of playing matches at neutral venues, and much of the reasoning behind the decisions to do so has been muddied to the point of impenetrable.  A police statement when the Premier League confirmed that their original request was made read as follows:

Our discussions with the Premier League throughout this process have been positive, with a shared focus on the priority of public health.

As such we have reached a consensus that balances the needs of football, while also minimising the demand on policing.

The majority of remaining matches will be played, at home and away as scheduled, with a small number of fixtures played at neutral venues, which, contrary to some reports, have yet to be agreed.

The views and agreement of forces which host Premier League clubs have been sought and where there were concerns, the Premier League has been supportive in providing flexibility in arranging alternative venues where requested.

It is believed that they’re concerned at the possibility of crowds turning up outside grounds, particularly with Liverpool in touching distance of their first Premier League title in thirty years.  It is not a comment on the whys and wherefores of it all to say that the lockdown is breaking down, and whether the supporters of any club – in this case, it’s Liverpool – will abide by any sort of social distancing these protocols is questionable.

But there’s another twist. In cutting the number of matches recommended for neutral venues from six to four, it is two of Liverpool’s matches, the derby at Everton and their title. These are both arguably understandable, but what was so special about, for example, Manchester United vs Sheffield United? In the current climate, and in the absence of a lucid explanation, conspiracy theories start to flourish when this sort of thing is offered without much of an explanation.

Perhaps it really is too early to tell, and the Bundesliga will settle back down into old ways as players acclimatise to this very different way of doing things. But the very fact that so much can taken from this one single matter hints at what a huge logistical tangle getting matches played is going to be. Whether it will or even can ‘lift the spirits of the nation’, of course, remains open to question. 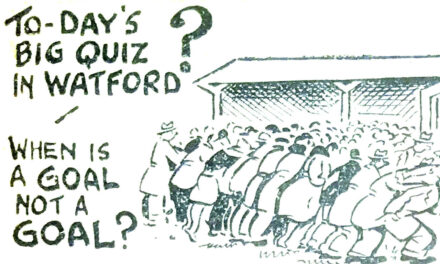