Q. Where do you see Chester City FC and Steve Vaughan in 5 years time?

A. Chester City in the Championship or even the top flight. As for myself, still chairman unless of course you know something I don’t! Are you the VAT man, or the Taxman or maybe even the police?

In October 2004, Stephen Vaughan was interviewed by the independent Chester City website “Blues Mad” and volunteered that answer to a question from a supporter of the club. It took a shade over five years, but the past may finally have become to start up with Vaughan, who was this week disqualified from acting as a company director for eleven years by The Insolvency Service over his part in a VAT fraud that took place during his time at Widnes Rugby League Football Club. We shall wait and see now whether the Serious Fraud Office choose to follow this up with a a prosecution, although his agreement to the disqualification is not legally considered in itself to be an admission of guilt.

The allegation made against Vaughan relate to what is known as “carousel fraud”.  Carousel fraud is a very specific type of fraud which relates to the non-payment of VAT within the European Union. It entails setting up complicated import and export schemes between EU member countries, charging buyers for value-added tax in the country of destination, and then absconding with the tax rather than handing it over to the governments. Until relatively recently, it was believed that the majority of carousel fraud concerned electronic items, but it has become increasingly apparent over the last couple of years that fraudsters have moved away from these items. Vaughan was said to be involved in the simultaneous purchase and sale of clothes, and the amount of money not reported for tax was a shade over half a million pounds.

This wasn’t the only misdemeanour that Vaughan effectively admitted to in signing the Disqualification Undertaking. In addition to this, he also failed to disclose a loan of £392,000 that he made to the club to other directors. Both of these events took place during the summer of 2006, while Widnes RLFC was effectively insolvent. Supporters of Barrow AFC and Chester City FC may be starting to spot a link in the effects of Mr Vaughan’s own particular style of football club ownership, but in this case there is no suggestion of any wrongdoing on the part of either of those two clubs. It may, however, encourage the authorities to take a closer look at the recent goings-on at The Deva Stadium.

How, then, does this affect the current situation at Chester City? Well, the good news is that Vaughan now categorically fails the Fit & Proper Persons Test by any stretch of the imagination. Where the legalities of the disqualification become less clear is how this affects his current involvement in the club. Under insolvency law, from the 24th of November he will be banned from “acting as a company director, or in any way controlling a company”. Vaughan, however, quit as a director of the club earlier this year and there is no law against him continuing to hold shares in CCFC 2004, who are the holding company that owns Chester City.

However, how one chooses to interpret the phrase “in any way controlling a company” is open to question, but it doesn’t seem unreasonable to hold the opinion that Vaughan will continue in much the way that his history would seem to indicate that he will – staying just on the right side of the letter of the law most of the time, transgressing the spirit of it considerably more often, but occasionally straying the wrong side of it. What may prove to be more relevant over the course of time might well turn out to be who is watching and how closely they are watching. As all students of American history will be more than aware, when the American authorities wanted to nail Al Capone, they got him for tax evasion.

Two weeks ago, the Football Conference gave Chester City three weeks to pay the debts that they owe to fellow clubs Wrexham and Vauxhall Motors. We still don’t know whether these amounts will be paid on time or what the sanction will be if they don’t. What we do know, however, is that their form in the league has changed dramatically under new manager Jim Harvey with three straight wins and the gap between them and the safety one is now nineteen points, which, whilst it remains a massive amount, isn’t completely insurmountable if they can continue anything like the form that they have shown in the league of late.

Chester, of course, were kept in the Blue Square Premier during the summer after failing to agree a CVA. Whether they would be demoted at the end of the season if they did stay up would be another matter, but it seems as if everybody is bending over backwards to give them every chance to turn things around. Meanwhile, the club’s name continues to slosh around in the gutter and, while Jim Harvey may have turned around their fortunes upon the pitch, nothing seems to have been done to fix it in any other respect. That job remains with Chester Fans United, and if they had received anything like the support from the authorities that the club has the situation there could be very different. 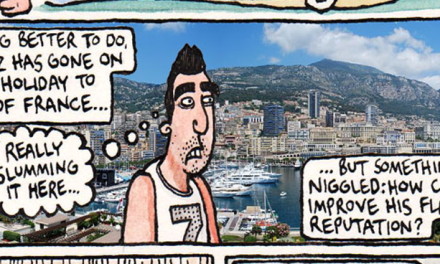