This being Leeds United, of course, it was always never particularly likely that the takeover of the club by the Bahrain-based Gulf Finance House (GFH) group was going to be completely straightforward. As the winter evenings continue draw in, this groups purchase of the club remains seemingly perpetually on the point of being completed, while on the pitch the teams performances and results provide weekly reminders to the supporters of precisely why it is so important that somebody comes into the club and actually invests some money into its playing staff. The last two weeks have been a case in point in this respect, with tepid single goal defeats at the hands of Burnley and Millwall intersected by a bizarre home thrashing at the hands of Watford in a match that saw Neil Warnocks team finish the match with just nine players on the pitch after a red card and broken leg to midfielder Rodolph Austin. A season that had started with a degree of cautious promise is threatening to unravel before everybodys eyes.

The GFH take-over of the club has been perhaps the main talking point around Elland Road so far this season without it having yet been completed, in spite of the fact that it is now more than six months since the story first hit the headlines, and there was bad news last week for anybody hoping that this buy-out will lead the club back to the promised land of the Premier League when the buyers’ auditors KPMG Fakhro released a report stating that, “…factors [which] indicate the existence of material uncertainties which may cast significant doubt about the group’s ability to continue as a going concern.” Notwithstanding this, the offer to buy the club has now been sent off to the Football League to approve the takeover, and in order to do this GFH has to pass the Football Leagues Owners & Directors Test, which now applies to anybody purchasing a shareholding of greater than thirty per cent in a club. The full details of this test can be seen here, but in short they can be summarised as a facsimile of the FAs Fit & Proper Persons Test.

Perhaps the most troubling aspect of this take0ver is the extent to which its form seems to have been shifting on an almost daily basis over the last few weeks or so. The concerns of the Leeds support has, perhaps, been most succinctly and eloquently summarised by the Leeds United Supporters Trust, who released a statement a week and a half ago outlining their concerns over the direction that this take-over was taking. The Trust states that “we were told by GFHC’s representative on October 8th that, “They intend this deal to be a full takeover of Leeds United. Ken Bates will leave the club and David Haigh will take control””, and their concerns hardly seem without merit. If this was the position as far as GFHC was concerned six weeks ago, what has changed makes the possibility of the loathed Ken Bates staying on at Elland Road, either as part of a “phased take-over” or perhaps even as a partnership that will see Bates stay at the club?

Of course, the obvious reaction to that question is to refer back to last weeks comments from KPMG Fakhro and begin to wonder whether this group actually has the resources to be able to complete the take-over and invest the money into the team that recent results seem to confirm remains desperately needed. This recent audit confirmed that “the group had accumulated losses of $293.76m and … its current contractual obligations exceeded its liquid assets”, and that, “As a result the ability of the Group to meet its obligations when due depends on its ability to achieve a timely disposal of assets.” In other words, GFH may have to dispose of assets prior being in a position to be able purchase the club and invest in its playing squad. The LUST addresses these concerns in stating that, “The next transfer window is crucial to Neil Warnock, while off the pitch our financial analysis raised serious questions about the club’s ability to continue without investment.”

As things stand, Leeds United Football Club is sliding in the wrong direction again. Attendances have dropped below the 20,000 mark for each of their last two home matches – 17,002 attended their League Cup match against Southampton, whilst just 19,104 turned out for the match against Watford – whilst a run of just one win in nine league matches has now seen the club drop to eighteenth place in the Football League Championship table. The team remains seven points above the relegation places in the division, but hopes of this being the season that would end with the club returning to the Premier League are fading fast and Neil Warnocks almost alarmingly depressed sounding interview with the Yorkshire Evening Post at the end of last week certainly seemed to hint at the air of despondency that continues to hang over Elland Road at the moment:

It’s difficult times at the moment. I’ve got to try and be as diplomatic as possible, considering how I feel, but it’s extremely difficult to get anything done or to get any answers. I’m basically like a supporter who knows a little bit more. The main thing is to get the takeover over the line. When you’re like this as a club, as we were at QPR, you’re very much stagnated. You’re almost in a straightjacket. The club’s got to move on, the sooner the better. Until it happens, no matter what anyone tells me, I won’t really believe anything. I don’t think I can.

When the manager is adopting that sort of tone ahead of a league match that was starting to feel like being one that Leeds could hardly afford to lose, it surely becomes clear that the problems facing the club remain as serious as they have done for some considerable time now. For supporters, concerns regarding this takeover are starting to become similarly obvious. If there are large numbers of Leeds supporters that are staying from Elland Road because of Ken Bates’ continuing involvement in their club, then it seems unlikely that a “phased takeover” or, God forbid, a “partnership” that sees him stay at the club will be likely to tempt them back sooner rather than later. If supporters are staying away because of the teams continuing stagnation on the pitch, then concerns over whether GFH will be able to fund the sort of drastic turnaround that would be required to tempt them back should be treated seriously as well.

Perhaps GFH will sell some of its assets, give Neil Warnock some money to spend on players and usher Ken Bates out of a side door with a one-way ticket to a retirement home. This, it rather feels, is what is needed to start refilling some of those banks of empty seats at Elland Road. If that money is not forthcoming before the January transfer window, though, or if Ken Bates remains in a position of influence at Leeds United, it is not difficult to imagine the clubs current position of somewhere between stasis and incremental decline continuing for some time to come, while that long-awaited return to the Premier League will remain as out of reach as ever. For all now, as much as the long-suffering supporters of Leeds United AFC can do is keep their fingers crossed and hope for the best, but at present the stagnation of their club continues, with no guaranteed happy ending in sight. 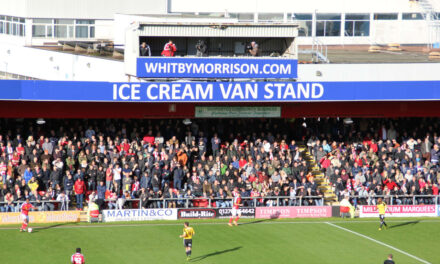 The Under-17 World Cup: The Group Stages