Sutton scored 86 goals in 199 Celtic appearances from 2000 to 2006. His “straight-talking” shtick is wearisome. Not as wearisome as BBC colleague Alan Green’s whingeing controversialism, though that isn’t saying much. Johnstone scored 210 times in 546 appearances for some not-that-good Rangers teams in the 70s and 80s. For him it’s “my club, right or wrong.” Predictably, Celtic fans almost unanimously celebrated Sutton “telling it like it is” about Johnstone, while Rangers fans defended Johnstone with gusto. And other clubs’ fans wished poxes on both their houses. So, was anyone right?

The spat is widely available on YouTube and I’ve covered as much as was audible over some noisy ill-mannered argument. Presenter Gerry McCulloch couldn’t remember so many calls to SSB “about someone who isn’t one of our pundits or…a current player or manager” and suggested “a lot of people” believed Sutton said things “to deliberately cause a stir (and) upset people.” Sutton retorted: “I form an argument. I think about what I do. Do we get everything right? Absolutely not.” Then the fun began:

SUTTON: (Derek’s) an embarrassment to the media profession. He’s an apologist, he’s a charlatan, he’s a Rangers puppet, he’s a cheerleader. Through the Craig Whyte era, the Charles Green era, Ally McCoist, he was still backing Rangers.

This was the headline-grabber, with the language used rather proving Johnstone’s point about “trying to cause controversy.” However… in June 2011 Johnstone wrote: “Questions have been raised about Craig Whyte…but you have got to give him a chance.” And two weeks before Whyte put Rangers into administration, Johnstone praised Rangers fans for giving him “the benefit of the doubt and rightly so” because “we all know the mess he inherited.” In December 2012, with Rangers’ fortunes “improving,” he wrote: “The man you have to thank is Charles Green. I was very wary of him after the Craig Whyte era. But he has made things happen and he has not let the club down. Nobody has defended the club like Charles. If anyone has something to say about the club, Charles is out within a couple of hours defending Rangers. The share issue raised £22m and there are 36,000 season ticket holders. He has them in a healthy position.”

Johnstone even backed an Ibrox naming rights deal with Mike Ashley. After Green left, Johnstone identified Three men with vision to take Gers to the top, his headline about Walter Smith, Craig Mather (remember him?) and Ally McCoist. And when McCoist’s highly-paid managerial reign turned sour, Johnstone insisted: “I am standing by the manager. I don’t see what changing the manager will achieve. He has taken the team from the depths of the Third Division to the brink of the top flight. He wants to see the job he started through. To deny him the chance…would be wrong.” So. Sutton was rude… but right. And Johnstone was furious.

JOHNSTONE: “You’ve had your five minutes of nonsense. I’ll take over now. I’ll watch (BT Sport) but I’ll turn the sound down because I get absolutely nothing from yourself except negativity. Anybody says anything different to you, you bawl and shout at them.”

Johnstone’s point wasn’t harmed by his initially threatening tone or the fact that he “bawled and shouted” it. Sutton barbed in the background: “You’re confusing negativity with the truth, Derek.” But negativity is Sutton’s default punditry position. Sutton furiously criticised referee Craig Thomson for only booking Rangers’ Harry Forrester after three aggressive fouls against Dundee in August: “The ref just bottled it, it’s as simple as that” (the next day, Sutton also said Chelsea/West Ham ref Anthony Taylor “bottled it” when he didn’t dismiss Chelsea’s Diego Costa). Two weeks later, when asked if Rangers could beat Celtic, Sutton just said “no” (the ultimate in “negativity”). And when asked why, he replied, correctly as it transpired: “because their centre-halves are horrendous.” So Sutton’s recent BT-negativity has often concerned Rangers. No wonder Johnstone turned the sound down.

JOHNSTONE: “For 25 years I’ve been all over Europe doing commentaries and everything else (SUTTON, barbing in the background again: “As a cheerleader, Derek, that’s why you don’t have any credibility”). I have never, at any ground in Scotland, had two security men following me around and standing beside me on the gantry. That’s exactly what happened the other night.”

SUTTON: “What is your point? What has that got to do with anything I’ve said?”

Most of this spat could be ridiculed. Not this. Sutton would have known exactly what the security detail had “to do with” his words. So, was Johnstone suggesting Sutton’s punditry warranted whatever threat required such a presence? The “other night” was Rangers’ League Cup quarter-final against Queen of the South at Ibrox. But whatever the threat’s source, Johnstone’s use of it as valid criticism went seriously beyond reason.

JOHNSTONE: “For you to say ‘If Mark Warburton loses his next two games, he will be sacked,’ what a load of utter nonsense. It’s your opinion and you’re entitled to it. I think it’s utter nonsense.”

SUTTON: “That’s hardly forming an argument, is it? But that’s not a surprise.

Sutton’s snarky response was unnecessary… but true. Sutton actually said that the aforementioned cup-tie was “a huge game for Mark Warburton… a game Rangers have to win. It’s hugely significant because Rangers then have Aberdeen. A loss-loss scenario and I think the question would certainly be asked if he could survive that.” This suggestion exemplified the ridiculous results-driven pressure on modern managers. But if Rangers lost to the second-tier Doonhamers and Aberdeen, questions “would certainly” have been asked. Because they were anyway, despite Rangers reaching the semi-final in style, after defeat to Aberdeen left them in the Premiership’s bottom six. So Sutton was right. Again.

SUTTON: “The problem is you don’t tell the truth. You backed Charles Green, you backed Craig Whyte…

JOHNSTONE: Don’t talk absolute rot. How would you know from down south that I was backing people? You’re not even in this country.

SUTTON: “People can’t accuse me of being biased. I formed an opinion on (ex-Celtic manager) Ronny Deila in August that people were forming at the end of the season.”

JOHNSTONE: “Which was a disgrace, by the way. We can all say he’s not right for Celtic, he’s poor. But the way you said it. That poor man. Absolutely caned the man.”

SUTTON: “I think you’re confused about what pundits should do. It’s called having an opinion.”

JOHNSTONE: “No, it’s not. There’s having an opinion and there’s going over the top.”

Actually, in August, after Celtic’s flat Champions League exit to Malmo, Sutton called out the board, not the boss: “Deila should not be hammered, he needs help. I would give him another shot. But I’d also give him some support.” But even in February, when Sutton famously said “the job of Celtic manager is simply too big for him,” he also wrote: “the Celtic board must take the blame. He’s a genuinely good guy (who) is doing his best. And he cares. You can see it.” And in April, he admitted: “I supported Deila at (the tail-end of last season), I thought he had found the key to the job. But this season has been regression.” A view confirmed by the Scottish Cup exit to second-tier Rangers: “If yesterday’s humiliation isn’t the catalyst for Deila to go, I don’t know what more it would take. The team is going backwards.” Strong criticism. But a “disgrace”? “Absolutely caned”?  “The poor man”?? Sutton was right. Johnstone was “confused about what pundits should do.”

REGULAR SSB PUNDIT HUGH KEEVINS: “From a journalistic perspective, stuck between two former players, both this side of the fence…”
SUTTON: “One of us is, Hugh. One of us isn’t because he’s an embarrassment to the profession…”
JOHNSTONE: “Well, you can’t help that…”

JOHNSTONE: “You are telling porkies with some of the things you’re trying to put over on the radio and television.”

SUTTON: “Go on, then. You’ve made a statement. What’s the porkie?

JOHNSTONE: “Listen, you’re just somebody I will not…I’m absolutely disgusted with myself that I’m even talking to you tonight because I have absolutely no respect for you whatsoever.”

Accusing Sutton of lies (plural) and not quoting one, despite Sutton asking him to “back it up” approximately 94 times, was daft. For all the childish name-calling in which Sutton indulged, he did at least have examples for each opinion. Johnstone did the equivalent of shouting “liar, liar, pants on fire” and running away. McCulloch then pleaded for things “not to get personal” (“of course it’s personal,” snapped Johnstone, helpfully) and to stay “within the realms of professionalism.” Both ships had long-sailed. But McCulloch surely realised his delays facilitated some great radio.

AND THE WINNER IS… “a pox on both their houses.” However, Johnstone’s arguments didn’t stretch beyond Sutton’s opinions being “absolute/utter nonsense/rot” or a “disgrace,” which they weren’t. While Johnstone remains the cheerleader Sutton said he is. In early 2014, he “(felt) sorry for (CEO) Graham Wallace and many other people currently running the club. They are being painted as the bad guys by some, but they inherited this mess. Rangers, at long last, have the right person in place to sort out the situation…If anybody can turn things around he can.”

Johnstone still toed the party line over Dave King then, being: “led to believe that, because of the way the club is set up at the moment, Rangers would be unable to accept investment from him.” But King’s “boardroom” was “filled with people who care for the club, as well as Scottish football.” And after six months, it was “incredible how much things have changed. On and off the park, fans have people they have total faith in.” Any club employee posing as an impartial pundit does so under false pretenses. And when Johnstone admits his ignorance (once writing: “I do not understand or have any interest in the financial side of the club”) and displays it so often, how can you argue with Sutton’s assessment of him as a charlatan, however childishly it is made?

The Ten Commandments Of Goalkeeping Attire 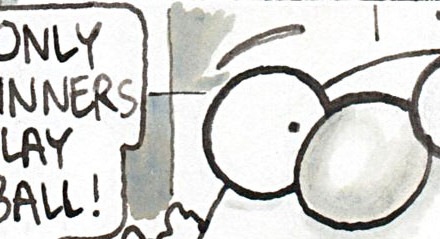