Cafe Calcio: The Street Pharmacists Guide To Football – An Introduction

A new season of the radio show and podcast Café Calcio begins in a couple of weeks, and we’ll be bringing you a series in association with it. First of all, though, a brief introduction, and here’s co-host Chris Roberts to tell us all about it.

Every show in the new season of Café Calcio broadcast on Resonance 104.4 FM will contain a feature linking various narcotics and their effects to an aspect of the game of football or a specific team. The text for those broadcasts will be put up here in time for the show’s transmission at 7PM every Thursday evening starting on September 6th when we will be considering the links between the hit delivered by crack cocaine and the excitement engendered in the fan by the BIG NAME FOREIGN SIGNING.

Before embarking on this journey into pharmaceuticals, or, for the more chemically literate, voyage into football, it is probably necessary to make a few things clear. The first thing is that I’m indebted to the good people at Urban 75 for the precise effects and, in a world where as much rubbish is spoken about drugs as rubbish is on them, can heartily recommend their forum as a useful place to find out more about all kinds of narcotics. I’m also grateful because, quite frankly, I’m too busy to try and watch football on drugs and write up the results, tempting though a hit of 4MTA (AKA flatliners) might be during nerve wracking derbies.

This is the second thing to make crystal clear. This series is not about dropping tabs at games but rather about linking aspects of football to various different chemicals, or if you prefer viewing street pharmaceuticals through aspects of soccer. That said in a brief survey of Cafe Calcio regulars the only popular recreational drug not taken at football games by supporters is Ketamine, though the same perhaps cannot be said of some players. Probably. In previous series we have touched on the phenomena of ecstasy and its relationship to the decline of hooliganism in the late 1980s. Ecstasy is perhaps unsurprisingly a popular fan football drug though dwarfed by solid uppers like speed and cocaine as well as cannabis. In turn these barely register against legal drugs like tobacco caffeine and alcohol, the last of these being the proud sponsor of many clubs and competitions.

Finally the pieces are not about performance enhancing, or recreational enjoyment of, different pharmaceuticals and their indulgence by footballers. If you want a personal opinion I’d love most of my side to experiment with dangerous steroids if it meant they could pass the ball a bit straighter or have greater “vision” on the pitch. That way however lies madness or, at best, a kind of lifestyle focused debate about personal choices that, surely, should be a health related rather than a moral or legal issue.

In the coming weeks the series feature the links between Rangers and temazepam, Leeds United under Peter Ridsdale and methamphetamine, the influence of LSD on shirt design and mascot choice as well as soccer phone ins to solvents and laudanum to Preston North End. Pre season though there will be a series of pieces paying homage to the government heroin screws you up posters with some general warnings about the dangers of football addiction and the Premier League in particular.

Until then… turn on, tune in and kick off.

Chris Roberts co-hosts Café Calcio on Resonance 104.4 FM. He wrote the book Football Voodoo on magic and superstition in soccer and is responsible for the Football Art Masterclass, the Latin speaking football correspondent Tacticus and the Russian billionaires random team name generator.

Café Calcio is broadcast at 7.00 PM on 104.4 Resonance FM and repeated on Saturday’s at 11 AM. Shows from the first three seasons can be found here and season four here. You can stalk the show on Twitter @cafecalcio

Football Governance And Parliament: What Happens Next?

Podcast 225: Strength in Depth – A History of Non-League Football, Part 5 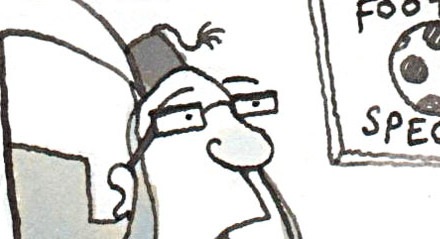