The Boos of the Witless

I don’t usually start these things with something personal, but in this case I feel it’s necessary. In March 1990, I went to the Soviet Union. I was 17, and the History A-Level class at my school was studying the Russian Revolution. The Berlin Wall had fallen five months earlier, and it looked very as though Communism in Europe’s goose was cooked. The USSR was teetering on the brink of break-up, and no-one really knew which way everything there was goin to land. It felt, to me even at the time, like a last in a lifetime opportunity to witness a world that might soon no longer exist.

The poverty and hopelessness were palpable. At GUM, Moscow’s flagship department store, there was little else for sale apart from small cardboard boxes full of ribbon, ill-fitting clothes, and badly-made electronics that looked as though they’d been made in the late 1960s (I accidentally broke the dial – yes, dial – on a display black & white television set by barely touching it, which resulted in me quickly pushing it back into place before the KGB got to me). Jeans weren’t available, so market stalls sold cotton trousers with a stonewashed denim print on them instead. At one point, a girl from our group was appoached by a man who dropped his trousers in the street, trying to push her into an exchange for her jeans right there and then. The queue around the Moscow McDonalds, which had opened less than two months earlier, was round the block. It’s hardly a defence of late 1980s US-style capitalism to say that a Big Mac and a pair of stonewashed jeans were better than Muscovites were used to, at the time.

The USSR imploded less than two years later, and it’s pretty difficult to even find a Marxist-Leninist country in which to live, these days. Only China, Cuba, Vietnam and Laos remain, and many would argue that China is communist in name only, these days, having adopted many of the tenets of free market economics decades ago. Meanwhile, the West has remained avowedly capitalist. In Britain, a Conservative government that has been tacking harder and harder to the right has now been in power for eleven years, and it doesn’t look like it’s going anywhere soon.

As such, the idea that Marxism is anything like a “threat” to this country is obviously, demonstrably absurd & stupid, and if the counter-argument to that is, “Well, I’m talking about Cultural Marxism, stupid”, well, thanks for letting me know, because I’m now aware of the fact that the person concerned regurgitates anti-semitic conspiracy theories. They’re on the same side as Anders Breivik. Their families must be so very proud.

All of which takes us to Middlesbrough, last night. It’s not just Middlesbrough, of course. Last year it was Burnley and Millwall (both clubs which have had large far right followings in the past, uncoincidentally), and there will likely be more over the course of the summer and the autumn. But last night it was Middlesbrough, and last night they wanted their booing to speak for all of us. It should go without saying that they don’t, of course, and it is to the credit of those present who did so that the racists were quickly drowned out by loud applause from those who didn’t want to be associated with their bigotry.

Let’s be absolutely clear about this. If you boo anti-racism gestures, you’re a racist. Arguments about “Marxism” are pure sophistry. Thes people may well think that black players like Wilfried Zaha, who are no longer taking the knee before matches have got their backs. They haven’t. If they think they have, my challenge to them would be to speak to them about it. I’m sure they’d be able to find them on social media. Ask them what they think of you, a white person, booing it. Because the decision of players, regardless of the colour of their skin, to not take the knee is categorically not the same as their decision to boo it, and if they think they have these players’ tacit support, they’re likely even more stupid than I already think they are.

(Zaha’s exact thoughts on the subject were, “The whole kneeling down… why must I kneel down for you to show that we matter”, which hardly sounds like the stinging rebuke of anti-racism that you seem to think it is.)

And no, I’m no not going to be sugar-coating my opinions on this because someone might get offended. Their fee-fees don’t matter in the slightest to me, and I hope my opinions upset them to the point that they at least give one or two people pause for reflection. You know, “Are we the baddies?“, and all that. But we don’t live in a perfect world, so I doubt that they will. There ain’t nothing in the world as pearl-clutchingly oblivious to their own prejudices as disingenuous racists seeking cover for their bile. And if they think we don’t see they and what they’re about, they’re just as wrong about this as they are about everything else.

What we see isn’t the booing of a political concept. We see them booing groups of young footballers, of which a not-considerable proportion are black or brown. We don’t know whether they’re England “supporters” or Middlesbrough “supporters” (or neither, or both), but we do know that their affection for anti-semitic conspiracy theories must be greater than their love of these football teams. If it wasn’t, then why on earth would they be booing the players in the few seconds before the start of a match?

But look, I know I’m not going to persuade anyone. How could I, in comparison with a YouTube channel called “RothchildsCovidConspiracy69” or whatever? And in any case, why should anyone listen to yet another middle-aged white dude on the subject? The culture wars will continue, because it benefits a certain political culture to do so. It’s quick and easy, and hell, if someone calls you out on your grotesquery, you get to call them a Nazi, even if you’re acting very much like one yourself. The best that the rest of us can is try to close our ears to the noise. They’re not worthy of our time, and they’re not worthy of our good intentions. Call them out for what they really are. It’s the best that we can do. 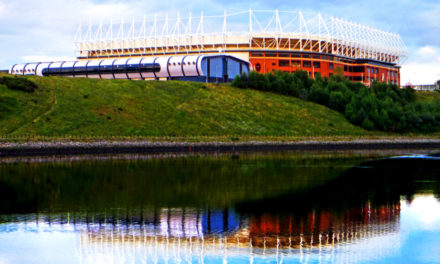 The 2012 African Cup Of Nations: The Group Stages – Final Matches