Alan Gilzean, who died on Sunday, aged 79, shortly after being diagnosed with a brain tumour, is an odd childhood hero. But I was (and am, some may argue) an odd child.

‘Childhood hero,’ in the case of my childhood, needs context. The very balding Tottenham Hotspur striker wasn’t a ‘poster-on-the-wall’ hero. I wasn’t into such things, scarred by the outsized Rod Stewart poster which wallpapered my cousin’s bedroom. And I say that while staring at a poster, on my wall, of 2017’s successful Roscommon Gaelic Football team, contemplating my regression to childhood.

And I used the term semi-seriously half-the-time. But Gilzean was my main memory of the first Spurs sides I saw, even though my first full season at White Hart Lane, 1973/74, was Gilzean’s last. And he became a ‘childhood’ hero partly with hindsight of his exploits for Dundee in the early 1960s and his ‘exploits’ off-the-field.

It wasn’t only that Gilzean looked 20 years older than most of his team-mates. I say most because the clearly combed-over Ralph Coates was also at Spurs, though not a regular despite scoring the only goal in Spurs’ 1973 League Cup final win over Norwich. And Gilzean was ten-plus years older than some of them, 35-and-three-weeks when I first saw him live, which was ancient-and-a-half in 1970s football.

It was also because Gilzean and the talented but languidly lazy Martin Chivers were Spurs’ version of Liverpool’s Kevin Keegan and John Toshack (both Gilzean and Chivers were subsequently likened to Bulgaria’s laid-back playmaker Dimitar Berbatov, Gillie for the skill and touch, Chiv for the attitude).

Chivers always seemed the bigger man, although not by as much as Toshack towered over Keegan. Yet, Gilzean…WON…THE…HEADERS. A little mind-bending to the seven-year-old me but a testament to Gilzean’s class, even as a veteran. Little wonder he immediately pre-dated Glenn Hoddle as “the King of White Hart Lane.”

There’s a remarkable picture in my first-ever Spurs programme, captioned “Alan Gilzean climbs high to head goalwards at Goodison Park.” And the caption-writer is not wrong. Gilzean appears to be about twelve feet in the air. And the lasting image from the very few times I saw Gilzean live, is him nodding the ball down to Chivers, from a similar unlikely height.

Gilzean’s written portrait on the Spurs programme’s ‘portrait page’ in October 1972 merely hinted at his remarkable achievements in Scottish club football, which persuaded Spurs to pay Dundee £72,500 for his services in December 1964. Gilzean wasn’t as prolific for Spurs as legendary double-winning striker Bobby Smith, for whom, his Guardian obituary says, “he was ostensibly a replacement.” But his strike partner was a certain Jimmy Greaves. And Gilzean was Greaves’ ideal creative foil. “He did all my running, I did all his heading,” Gilzean often semi-joked.

Gilzean scored 133 goals in 439 Tottenham appearances in all competitions, contributing to FA, Football League and Uefa Cup successes. But he scored an astonishing 169 in 190 Dundee games, contributing hugely to Scottish league success in 1962 and, eeek, a run to the 1962/63 European Cup semi-final. He was also nicknamed “Peenie” in his formative football years in Perthshire with his native Couper Angus junior team because, schoolmate Raymond Hepburn claimed, in a touching Dundee Courier tribute this week, that “he could put a pass on the equivalent of the head of a pin.”

Five-and-a-half decades later, Dundee as European Cup semi-finalists defies comprehension, even more than the Scottish title which got them into the competition. Dundee’s ‘golden age’ alright. Gilzean was a star of both shows, pictures of him in a Dundee shirt with hair covering his head an arresting sight.

Dundee, managed by Bill Shankly’s brother Bob, won the league by three points from Rangers, clinching the title by beating, and relegating, St Johnstone on the final day. But the key result was their 5-1 win at a foggy Ibrox in November, “Gillie” netting four.

He grabbed nine of Dundee’s 20, in the European Cup run, hitting goals four, seven and eight as Cologne lost 8-1 (EIGHT-BLOODY-ONE…sorry, had to be done) at Dundee’s Dens Park in the first round, first leg, still Cologne’s club record defeat, the pain only part-smoothed by a 4-0 second-leg win. Gillie was the hat-trick hero of the next round too, Dundee overturning a 1-0 first leg deficit with a 4-1 Dens Park triumph.

Anderlecht awaited in the quarter-finals, having just shocked Real Madrid, five-times winners of the then-eight-year-old competition. They themselves were shocked by two early Gillie goals in the Heysel Stadium first leg, which underpinned a 4-1 away and 6-2 aggregate triumph. AC Milan, the eventual Cup winners (beating Benfica 2-1 at Wembley) sealed the semi-final with a 5-1 home win, Gillie scoring in the 1-0 consolation second-leg victory.

Full international honours for the then under-23 international would have followed immediately but for competition for places from Denis Law and Ian St John. He eventually debuted in November 1963 and the fondest-remembered of his 12 goals in a 22-match, eight-year international career came in his third game, in April 1964, his 72nd-minute header from a Davie Wilson corner sealing a 1-0 win over…England.

By December, he was Spurs-bound, reportedly inspired to move south by ambitions to play at Wembley, having missed out on the 1963 European Cup final there. Spurs were reportedly inspired to move for him by his brace for a ‘Scotland XI’ at Spurs in November 1964 in a benefit match for the family of Spurs double-winner and Scotland’s John White, who died that July after being struck by lightning while playing golf. But Gilzean had to take ‘strike action’ to force the move, as Dundee were reluctant sellers until given 72,500 reasons not to be.

Gillie and Greaves were an instant hit, together and with the Spurs faithful, who nicknamed them the ‘G-Men’ in a song which rhymed Gilzean with “they’re the world’s best goalscoring machine” (they don’t write ‘em like that anymore…mercifully). Greaves was the main scorer because of course he was. But they became enduring firm friends, with the official Jimmy Greaves twitter feed, run by his agent Terry Baker since Greaves’ stroke in May 2015, stating this week that “Jimmy loved you and always said you were the best striking partner ever.”

Gilzean scored key goals in Spurs’ cup successes; a 1967 FA Cup third-round replay winner against Millwall; goals in the 1970/71 League Cup fourth round, quarter and semi-finals; five of Spurs’ FIFTEEN over two legs against Keflavik in the 71/72 Uefa Cup first round; a nerve-easing goal in a tight quarter-final second leg against Romania’s UTA Arad; and an extra-time winner in the 72/73 League Cup third-round replay against Middlesbrough. He never scored at Wembley. But merely ‘walking out’ there was his ambition, which he fulfilled three times for Spurs and once, in 1969, for Scotland.

Gilzean largely disappeared from football view soon after his testimonial match at the Lane against former UEFA Cup opponents Red Star Belgrade on 27 November 1974. He rarely watched Spurs, despite living in nearby Enfield, and stopped watching them at all after the 1981 FA Cup Final, the dull drawn game with the two Tommy Hutchinson goals, not the ‘Ricky Villa final’ replay thriller.

And he soon largely disappeared from public view, uninterested in continuing in football after a short managerial stint in Hertfordshire non-league football. He claimed to not like football and reportedly only played it because it was “something I’m good at.”

He was “good at” was hard drinking, too. Gilzean was unfashionable in the early 70s for more than the hairstyle. Thus, stories of his drinking exploits, which featured in Hunter Davies’ (in)famous behind-the-scenes account of Tottenham’s 1971/2 season, ‘The Glory Game,’ surprised me and, when I read them when I was in my late teens, Gillie’s hero status was enhanced (although I was six years from taking a drink myself), especially as the tales didn’t have the usual late chapter ‘my battle with alcoholism.’

In ‘The Glory Game,’ Gilzean was portrayed, as one reviewer put it, as “the outsider at Tottenham, the old man at 33 who had done national service and worn grey flannel suits, compared to the hairy flash gladiators in the rest of the team.” But he was very much part of what Alan Pattullo described, in his terrific March 2016 Scotsman interview with the recently reappeared Gilzean, as a group of Spurs players who were “hard-drinking men-about-London-town.”

The veracity of Davies’ written recollections has been questioned by those featured in the book ever since it came out. And Gilzean joined the list, telling Pattullo “I’ve never owned a budgerigar in my life” (long story). But Gilzean’s Guardian obituary, by author Julie Welch, who became ‘Fleet Street’s’ first woman football reporter in 1973, quotes contemporary journalist Norman Gillier’s claim that Gilzean “could drink us all under the table.”

When Spurs’ legendary boss Bill Nicholson, told him he’d been seen leaving a night-club at 2am, Gilzean said “I was just going into the club for a nightcap.” And in another great interview, with the ‘Spurs Community’ forum in January 2012, when he first re-emerged into public view in England, the 73-year-old Gilzean wonderfully contemplated his own mortality: “you don’t know how many bottles of red wine you have left.”

Gilzean’s departure from view in the 1980s inevitably led to speculation, the most-quoted suggesting he was a “down-and-out in Weston-Super-Mare.” This incongruous concept was codswallop (great film title, mind). Gilzean had moved to Somerset with work, but he was no Howard Hughes, despite inspiring James Morgan’s 2010 book ‘In search of Alan Gilzean.’ And having departed the Spurs scene as an old-looking 35-year-old, he returned as a fit-looking, instantly recognisable 73-year-old.

He had occasionally re-appeared at Dundee, prompted by his kids. And he was persuaded back to Tottenham by goalkeeping great Pat Jennings, whose Spurs career was also 1964-to-1974. Gilzean quickly joined the plethora of ex-Spurs players on matchday hospitality duty. “I will come back and see if I like it,” he said. He did like it.

Gilzean was regretlessly proud of his life. “I was just a guy whose dreams came true. I became what I wanted to be, a footballer,” he told Spurs Community. He once said ‘A Dream Come True’ should be his autobiography title. He suggested that “somebody up there likes me” when recalling some of his team-mates at Dundee, Spurs and Scotland. And despite his professed dislike of the game, once he stopped playing, the feeling certainly wasn’t mutual. He was inducted into Scottish Football’s Hall of Fame in 2009 and Tottenham’s equivalent in 2013.

In researching this piece, I never encountered the cliché “no-one had a bad word to say about him.” But, with the possible exception of his ex-wife, it seems few, if anyone, did. Perhaps not such an odd childhood hero, after all.

The Seven Ages Of Fan, Part Four: The Soldier 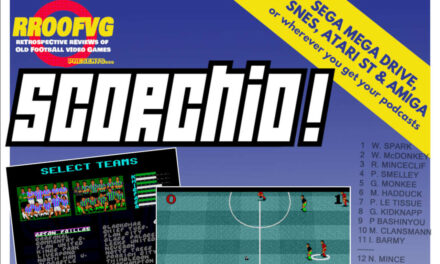