A Night At The Opera: England’s Really Friendly Friendly

In the twenty-two years since I made the last of my then-regular Wembley trips for England internationals, almost everything has changed, including, of course, the stadium itself. But there were some old-fashioned fears being expressed prior to this week’s England friendly with Ireland. Most media attention was focused on the English hooliganism which stopped the nations’ last meeting early in its tracks at Dublin’s Landsdowne Road in 1995. As a result, the apparent decision by England’s Football Association to commemorate their 150th anniversary by kitting their team out in West Germany’s 1974 World Cup-winners’ shirt garnered less outrage than might otherwise have been the case.

Instead, the major concern was whether England fans’ regular desire to tell people not to “surrender to the IRA” would be loud enough to attract unwelcome attention from international football authorities. This was thought possible in vengeful post-Woolwich atrocity atmosphere, and given the assumption amongst Neanderthal elements of England’s support that there would be plenty of “IRA scum” among the large Irish support. This assumption ignores the historical context of “IRA support” – the relative lack thereof – among citizens of the modern, 26-county Ireland. But I’ll not get into that here, you’ll surely be relieved to hear. Suffice to say that in my extensive travels in and around Wembley prior to kick-off, I didn’t see one single supporter surrendering to the IRA. Not that Wembley had facilities for such things… they didn’t even have facilities in place for people to buy tickets using the still-legally approved method of swapping pre-determined quantities of notes of the realm for a match-day ticket.

I accept that not being able to pay for tickets in cash is probably only news to someone who hasn’t been to an England game since Graham Taylor was manager (the boss whose era England’s performance seemed to be commemorating). And it is, I recognise, a step towards the supposedly-desired “cashless society” (cue jokes about Government economic policy quickening that process). But it meant that my relatively last-minute ability to afford a ticket made getting one remarkably fraught. Indeed, without the generosity of a very good friend, who ordered and bought my ticket on her credit card, I might have needed a ticket tout (and if they weren’t taking cash, I’D KNOW the world was leaving me behind).

My booking confirmation form neglected to say how to physically obtain my ticket. I asked Wembley’s on-line box office, via Facebook (phone numbers having gone the way of cash on Planet Wembley). At the time of typing, I still await a response. They replied to “how much are programmes?” and “are they serving alcohol at tonight’s game?” – neither remotely ‘box office’ queries. Yet my genuine information request was deemed as unworthy of response as “I’m half British-Irish, who should I cheer for?” which came from… er… Dang Ngoc Ly (Irish mother, presumably). Fortunately my very good friend is a very good friend indeed and was able to lend me her credit card at very short notice, just in case I needed to show it (“it’s all right, I can use my platinum card,” she revealed, AFTER I’d got the beers in).

At Wembley, armed with booking form, credit card and ID, I joined a matchday collection queue which appeared to consist of half the forecast crowd. Mindful of this, Wembley put on a mini-drama, starring a stadium steward and an American guy who, when confronted with signs directing him either to “England” or “Republic of Ireland” ticket collections, asked “where do neutrals go?” Ah…the comedy of confusion. And what did I need at the ticket window? Well the guy behind it figured I didn’t look much like a Carol (my friend’s name). But he, probably wisely, ignored my “it’s my weekend name” gag and fetched my ticket without requesting any verification whatsoever. He asked me: “What’s the postcode?” which was about the only thing I didn’t know…but he gave me the ticket anyway, no further questions asked. Not for the first time, the phrase which leapt to mind rhymed with “clucking bell.” Still, thanks Carol.

The contrast between the journeys to England games in 2013 and 1991 were already stark. The Jubilee Line extension on the underground made the journey less grim – no changing at an overcrowded Baker Street when Wembley Park was a direct, 26-minute journey from Waterloo. And my inner snob came to the fore as I eavesdropped various football conversations. England crowds had looked smarter on TV for years, certainly since the 1996 European Championships (and, perhaps co-incidentally, since England fans stopped waving the British Flag). Now they sounded smarter too.  1980s conversations were usually expletive-riddled lambasting of unpopular players (“facking Kerry Dixon”, usually, if memory serves). The lads who got on at Dollis Hill this week gave a thoroughly reasoned account of why Daniel Sturridge had earned his place in England’s starting line-up.

The Ireland fans on my tube were similarly impressive. The latest wave of emigration to put Dublin governments to shame contained greater numbers of ‘professional’ people than in the 1950s, when my parents came over, and the 1980s, when my cousin followed suit. And that showed too. The contrast between the 80s and now was never starker, though, than on Wembley Way itself. There were very few touts indeed – I didn’t hear “’oo wants seats, buy or sell” once – despite the game being a near sell-out (more reason to be grateful for a friend’s credit card). And in their place, were youngsters handing out free samples of…skin moisturiser – the sort of mission improbable you’d imagine being set for arrogant tossers on The Apprentice.

Once inside, the atmosphere was far less combative than it had been even at sparsely-attended friendlies in the 80s – although the point is often made that a few hundred knuckle-draggers would always garner more attention among 25,000 people than 80,000. Even the return of an old 80s staple – the apparent double-booking of seats – was less fraught than back in the day. It was an unfortunate time to only be able to find my confirmation form rather than my actual ticket, especially as the seat number was in very small print alongside my – female – friend’s name. The Nottingham Forest fan with ticket-stub-backed designs on seat 161 didn’t look ready to appreciate my “weekend-name” joke, either. But he accepted the situation with extremely good grace, as he and his nine-year-old son found nearby seats together. Thank you, if you happen to read this. It genuinely was Wembley’s fault, not mine.

The respectful atmosphere continued during a pre-match tribute to former Ireland international Tony Grealish, who died last month, with pockets of warm applause periodically breaking out. Mind you, Grealish played for so many clubs that a third of the crowd had probably cheered him on in their own club’s colours at some stage. And even the presentation to very temporary England captain Ashley Cole was met with Opera House-style approval, rather than the booing which has permeated his 102-cap career. The ultimate test of the crowd’s good nature was yet to come, however.

Hours earlier, the Telegraph newspaper’s Paul Kelso had tweeted his reminiscences of terrace chaos/trouble when Ireland scored at Wembley in 1991. I suggested a repeat was unlikely, as it required manager Giovanni Trappatoni’s ultra-conservative Irish side to score. Within 12 minutes of kick-off, Shane Long proved me wrong. I barely had time to consider how to conceal the “YEEEAAAAAAGGGHH” that I was inwardly feeling before about 10% of our section leapt from their seats and said it for me. And still the crowd was fine…even as England’s response stretched the definition of “pedestrian” to new limits. Times genuinely had changed since 1991, off the field anyway. On it, England eventually earned their draw. The twin brother of HG Wells’ ‘Invisible Man’ had obviously discovered sufficient Irish heritage to line out at left-back for Trappatoni’s team, although the goal came from the opposite flank, with centre-back Sean St.Ledger choosing just the wrong time for his Tiller Girl impression (ask your granddad).

Irish fans, meanwhile, conformed to as many stereotypes as time allowed. They were in great voice – even ‘The Fields of Athenry’ sounded fractionally less of a God-forsaken dirge than usual. And the ground was far quieter when most of them headed for the bars at half-time, many not to return until long after the restart. Nature around seat 161 continued to be good, too. The Nottingham man’s son had ‘treated’ us to plenty, but not irritatingly many, excitable, shrill “Come on, Englands”. And junior became particularly animated when Nottingham Forest’s Simon Cox came off the Ireland bench. He clearly expected Cox to be in English/German white. And, spotting this confusion, the Dubliner sat alongside him asked “will you cheer if Cox scores?” After minimal hesitation, the lad replied “I’ll cheer if he scores an own goal.” Some fans will look a little kinder on Forest next season because of that.

So, from where I was sat, everybody was happy enough, largely despite the game. Indeed, from where I was sat, the view was terrific, if distant. It was surprising how much detail you could see – more than the referee, apparently, when Wayne Rooney helped Robbie Keane to the penalty-box floor…not that I’m bitter. If the atmosphere was a bit “sanitised”, that sanitation was at least replacing an unmissed confrontationalism. And even when “No Surrender” seemed to emanate from the terraces, it soon mutated into Ireland fans noting that “you’re supposed to be at home.” Watching modern-day England, therefore, was a virtually new experience; maybe more middle-class; certainly more moisturised. And, overall, much smoother and better for it. 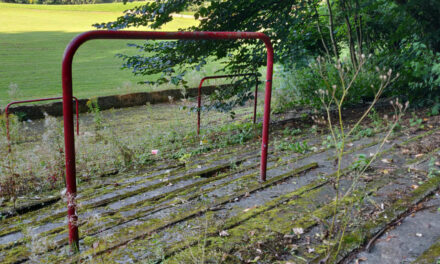