Often, when push comes to shove in radicalising a group of football supporters, it will take one, symbolic moment to push those that might otherwise have merely got on with the job of watching their team to realise that the time  for action is now.

For those that follow the ailing Blue Square Premier club Kettering Town, that moment may have come at any of three or four different occasions over the last month or so, but the tipping point for many may have cone with twin five-goal defeats at the hands of Luton Town over Christmas and the New Year (results which plunged the club back into the thick of the relegation places at the bottom of the table), it with the release of an official club statement which sought, unsurprisingly enough, to place the blame for the club’s woes at the foot of everybody but those with the overall responsibility for managing its finances.

The Luton matches were, perhaps, more symbolic in their effect than anything else. Luton Town have started to move into ominous form of late, and that they should hand out two thorough pastings to a team near the foot of the table was no great surprise in itself. The timing if the two defeats, however, was unfortunate for those clinging to the hope that Kettering’s problems are a mere flash in the pan. Over two successive defeats, and in the space of just five days, each of the team’s shortcomings on the pitch was laid horribly bare. Moreover, these matches were played out in front of big Bank Holiday crowds, with over 7,000 turning out for the first match at Kenilworth Road, and over 3,000 in attendance for the return match at Nene Park. It would, by the way, be easy to glance at the second of those attendance figures on the surface and guess that Kettering’s gate problems may be receding. Not so. Over 2,000 of those at Nene Park the other day were Luton supporters.

Oh the pitch, then, any flames of encouragement that might have lit with a couple of reasonable performances on the pitch last month were more or less extinguished with the Luton matches. Away from it, though, there has been further trouble ahead with the apparent collapse of the only show in town so far (as far as take-over bids are concerned) to buy the club from the thoroughly discredited Imraan Ladak collapsed before they had even really got going. Lee Thorn, a former director of the club, had expressed a public interest in attempting to rescue the club, but this seems to have already hit the buffers with the release of a  long-awaited official club statement on the twenty-eighth of December.

There can be little question that the statement makes for curious reading. No reference is made therein to the folly of moving the club to Irthlingborough during the summer, and no reference is made to disastrous decision to hand a new manager, Morrell Maison, a pile of cash to spend before parting ways with him a couple of months later. Indeed, the statement seems singularly unaware of the inherent risk of moving away from the town that it has called home for one hundred and forty years, and then offering reduced season tickets to anybody that wanted. If the voice of this statement is the voice of Imraan Ladak, then that voice doesn’t seem to wish to take any responsibility for what has gone wrong at Kettering Town over the last few months or longer. Even on the matter of being locked out of Rockingham Road as it was last month, it states bullishly that “The club does not believe it is has [sic] breached the terms of its tenancy agreement”.

In the matter of this clubs financial crisis, Kettering Town FC seems to.place blame for its circumstances upon the failure of a sponsorship deal with a company called DRC Locums, of which Ladak was formerly involved. The statement claims that, as part of the acquisition of shares in the company by an investment company called Hamilton Bradshaw (owned by James Caan, of BBC Dragons Den “fame”), sponsorship to the tune of £1.4m – an astonishing amount of money for a club playing non-league football – would be paid to the club, before going to considerable detail over how this money was to be paid, and subsequently wasn’t. It is, of course, not for us to go into the rights and wrongs of a case that may yet end up in court. It doesn’t, however, seem unreasonable to point out that the seriousness of this dispute was public knowledge well before the decision to move to Nene Park was made. Considering how important this disputed sponsorship money has subsequently become, we can only ask the question of how the club arrived at the decision to take on this significant extra financial burden when the question of whether the club would ever see any of that money can only be described as “up in the air”, at best.

The statement also refers to one “interested party” that had been in contact though, again, the combative and dismissive nature of the language used in the statement hints at the likelihood of anything coming of that. The overall impression that comes from the statement is that supporters of the club that had waited a long time for anything of substance to come from the club will likely feel as if they were wasting their time.

So it is that those supporters are becoming radicalised. Talk of a phoenix club now has the tone of being a matter of if rather than when. Supporters of the club – and this is a sentiment that we can only echo – are now being urged to join the supporters trust, which remains the best, perhaps only, chance of restoring something approaching sanity to football in this particular corner of Northamptonshire. There is considerable discussion of open protest at matches, and of what form such protest should take. Whilst supporters that seek to take direct action should, of course, be reminded to stay within the boundaries of the law, it would not be surprising if tempers run high at the clubs next match. This is a group of supporters that were promised a considerable amount, of which precious little has been delivered. At this stage, they may reasonably assume, attempting to pin the blame for something that has gone horribly wrong elsewhere was never going to win any battle for hearts and minds.

That things should have come to this is to the shame of those that have mismanaged Kettering Town FC over this period. The matter of who owes what to whom in terms of sponsorship money is an irrelevance. The most important thing that the owner or chairman of any football club can do, more important than any success on the pitch or any sponsorship deals, is to ensure the long-term survival of that club. In applying that criteria, we can only judge Imraan Ladak as a failure. The buck stops with him. At this moment in time, the future of Kettering Town, one hundred and forty years of history, with all the shared memories and culture that come with it, cannot be guaranteed. Right now, nothing else matters – sponsorship disputes or not. 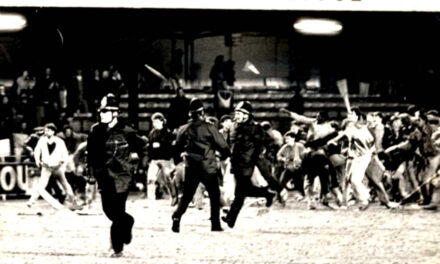